More construction coming to the Hill 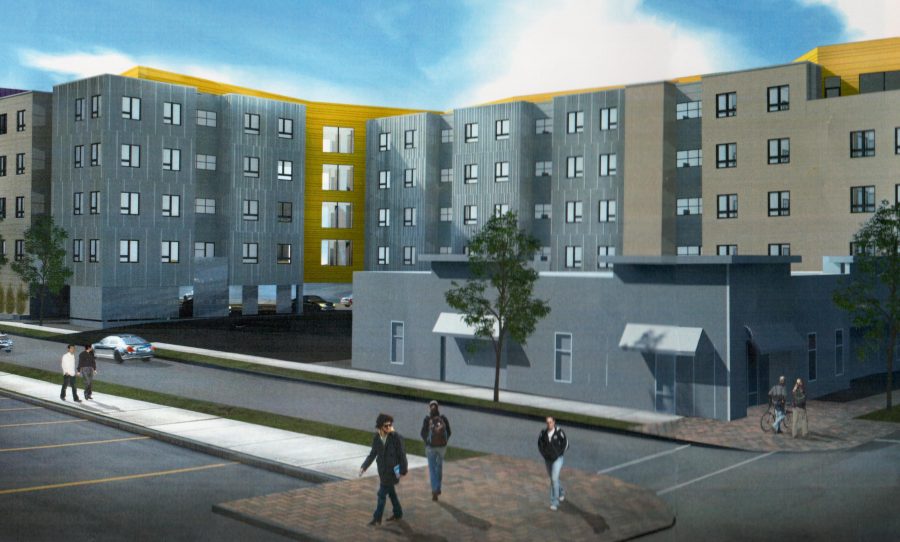 The Landing will be located on the corner of 22nd Street and College Street next to the upcoming storefront where Great Wall once stood.

More construction is set to begin on College Hill this summer.  UNI alumni Brent Dahlstrom and Ryan Kriener are partnering to provide students with modern living close to campus.

The project, called The Landing, will be a five story apartment complex with ground-level parking and various apartment options.

The Landing will occupy an L-shaped area behind where Great Wall Chinese Restaurant once stood, taking the place of Ginger’s and IPPA to the west and bordering Great Wall’s former parking lot on the north side.

According to Kriener, the managing member of The Landing, construction is set to begin in the summer. The Landing is projected to have 132 beds available in an estimated 24 studio apartments, 16 two-bedroom units, 16 three-bedroom units and seven four-bedroom units.

According Kriener, the prices per unit are $750 for the studio, $1,200 for the two-bedrooms, $1,800 for the three-bedrooms and $2,200 for the four-bedroom units. Those prices do not include utilities; however, each apartment will feature a washer, dryer, dishwasher and full kitchen. Cable and internet will also be included in the monthly rate and will be provided through Cedar Falls Utility (CFU).

Although Kriener is not concerned with the cost per resident, some students indicate that it might be an issue.

“The pricing is definitely on the higher end comparatively to other housing in Cedar Falls—even the modern and new housing,” said Maleah Garwood, a junior political science and philosophy major. “The average college student wouldn’t want to spend that much.”

Jacob Bergman, junior actuarial science and philosophy major agreed that the cost is too high for the area.

“I personally do not believe that this is an affordable price range for college students,” Bergman said. “Along with having very expensive housing, not including utilities in that payment is a lot to put on people.”

Kriener said, “We are very hopeful that the utilities would be very low.” He predicts that the type of materials used in the construction of the building will keep the cost down.

The monthly rate per unit does not include a reserved parking spot based on the limited number of spaces available. The plan permits 47 parking spots to be located underneath the building, according to Kriener. He shared that the construction team is, “quite-worried” that parking may deter people away from living in the apartments.

They suggest residents will be able to park at the parking ramp, located one block away or other lots in the area.

“There’s going to be a parking lot right behind Balance and Sidecar. I believe there is a possible use of the parking lot behind Little Bigs, Social House, all those places,” Kriener said, “But they will end up having to find street parking.”

Kriener said he is aware it is not ideal, but said that based on the commercial zoning of the area, there is no requirement to provide any parking for the building.

“We figured with that big of a project and that many students, we would like to try to fit in there as many [parking spaces] as we possibly can.” said Kriener.

When asked whether the parking situation was a concern, Isaiah Johnson, a junior philosophy major, said, “I’d probably just find somewhere else to live. I want a reliable place to park my car.”

According to Bergman, the lack of parking is ridiculous.

“To only have around a third of the residents have spots is unfair. Relying on already busy streets for parking would really put a downer on the living arrangements. I personally would not want to live at these apartments without the ability to park at my place of residence,” said Bergman.

Garwood expressed concern with parking on the street near the bars on the Hill.

“Parking is definitely a concern,” Garwood said. “No one wants to walk two blocks to get home. And with the location there is a possibility that cars parked on the street could be damaged, also there are specific rules about parking overnight in university parking lots that would make that option difficult.”

According to Andrew Milder, a junior communication sciences and disorders major, parking will not be a hindrance when considering The Landing.

“Parking doesn’t sound like much of a concern. So long as I have a place to park my car, I’m fine,” Milder said.

Regardless of the current concerns, the excitement for the new developing is alive among students and the developers.

“We are really excited about this, it is going to be totally different from anything that has been built in Cedar Falls,” Kriener said.

Bergman said of the coming construction, “I really like the new developments going up on the Hill because it makes the area much nicer, aesthetically, and brings in business to the area. It will help bring new life to a relatively older area, so I am a fan of it.”

Project developers of The Landing said that roughly 3,000 square feet on the ground level of the building will be reserved for retail spaces. According to Kreiner, there is an interest in having a restaurant located in a portion of that space.

Urban Flats, another apartment project by Dahlstrom, is scheduled to be completed in May. The Landing is set to open in the early fall of 2018.