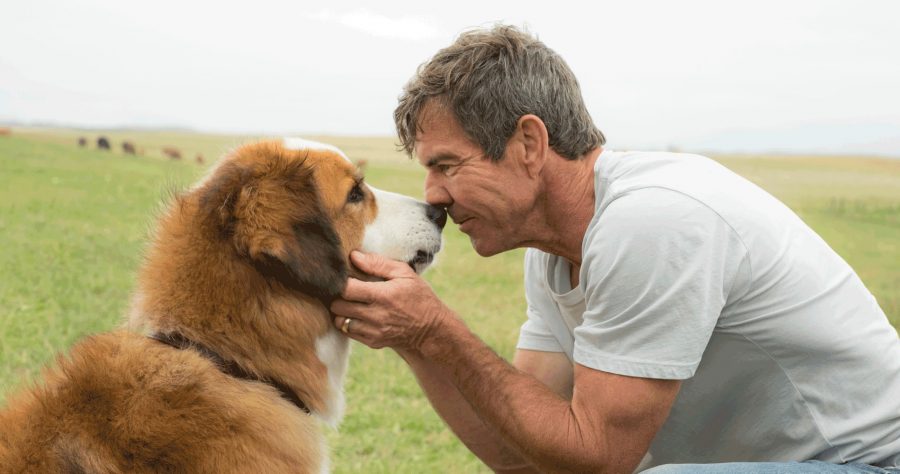 The new comedy-drama "A Dog's Purpose" currently carries a "rotten" score of 35 percent on Rotten Tomatoes.

Picture this: a couple of screenwriters walk into a film producer’s office and pitch an idea for a new movie about a dog who dies over and over again, only to be reincarnated into a different dog each time it dies. The screenwriters explain that this cycle would repeat itself a few times until the movie just, sort of, ends. But wait, there’s more! The dog, who can also talk, is voiced by the snowman from Disney’s “Frozen.”

Now, if you think that this sounds like an absolutely ridiculous premise for a movie, you’d be right. However, it apparently wasn’t too ridiculous to prevent Amblin Entertainment from unleashing the recently released monstrosity of a film known simply as “A Dog’s Purpose.”

The film in question follows the story of Bailey the talking dog, who profoundly impacts his various owners over the span of multiple lifetimes as he continues to be reincarnated into different dog breeds each time he dies.

Unfortunately, the sheer originality (or rather stupidity) of this inexplicably far-fetched plot is not enough to save “A Dog’s Purpose” from being a total cinematic failure.

“A Dog’s Purpose” is directed by Swedish filmmaker Lasse Hallstrom, who has helmed such critically acclaimed films as “My Life as a Dog” and “What’s Eating Gilbert Grape.” However, the technical acumen with which Hallstrom directed those films is conspicuously absent in “A Dog’s Purpose.”

Now, “A Dog’s Purpose” isn’t a poorly shot film by any means. In fact, there are a number of rather beautiful establishing shots of both rural and urban landscapes sprinkled throughout the film. The real problem with the film is how conventional it all looks – despite the wholly unconventional (and admittedly absurd) premise.

Hallstrom frames most of his characters in traditional waist-up medium shots and utilizes close-ups at the most cliché, overly sentimental moments. Yes, Hallstrom does jump to POV shots to imitate the dog’s visual perspective at times, but even that comes across as hackneyed.

To put it bluntly, the only truly memorable shot in the entire film is what can only be described as a “nose cam” shot. In this shot, the camera cuts to a shot from inside Bailey’s nose without any explanation, and the viewer sees what Bailey is looking at through the dog’s nostrils.

Not only is “A Dog’s Purpose” visually unoriginal (besides the aforementioned “nose cam”), but the film’s screenplay is filled with more formulaic plot points and cringe-worthy dialogue than a Hallmark Channel Christmas movie marathon. The dialogue for Bailey, who speaks solely via voice-over narration, is especially horrendous.

Nearly all of Bailey’s dialogue seems to revolve around the fact that he doesn’t understand what most human actions mean – such as when Bailey assumes his owner is looking for food in his girlfriend’s mouth whenever he kisses her.

The screenwriters re-use various iterations of this same, tired joke over and over until the attempt at humor not only fails to connect with the viewer, but also borders on utter annoyance.

In addition to the unbearable dialogue, “A Dog’s Purpose” also offers an overabundance of plot holes. Indeed, it seems that one can poke more holes in the film’s screenplay than in the planet’s ozone layer.

Whether it’s Bailey’s curious tendency to inhabit the body of another dog well after that dog has already been born or the inconsistent aging of numerous characters, “A Dog’s Purpose” seems to be less concerned with plausibility than even the most over-the-top Marvel superhero movie.

To put it simply, the acting on display in “A Dog’s Purpose” set a new low for acting mediocrity everywhere. Throughout the film, it appeared that the entire cast was competing with one another to deliver the most bland, ineffective and nauseatingly sentimental performance of the film.

The film’s cast largely consisted of relatively unknown actors, and thanks to their uninspired performances, they are likely to remain unknown to general audiences for the foreseeable future.

One of the only “big names” in the film was Dennis Quaid, whose once somewhat respectable career has been effectively “put down” due to his ham-fisted performance.

Lastly, similar criticism should be directed towards Josh Gad (of “Frozen” fame), whose voice-over portrayal of Bailey the dog serves as the film’s proverbial death knell.

It is not at all an exaggeration to say that the acting put forth by the various dogs that portray Bailey in the film was far and away better than their human counterparts. However, the artificial tone of voice and insipid cadence with which Gad delivers Bailey’s lines effectively cancels out the canine actors’ inherent charm.

In short, “A Dog’s Purpose” is an offensive film on multiple levels. As an unabashed dog lover, I found the repeated inclusion of dog deaths for cheap sentiment to be both exploitative and shameful. As a movie lover, the film offered nothing worthwhile in terms of either cinematic or narrative grounds. In fact, “A Dog’s Purpose” seemed to ultimately serve no purpose at all.