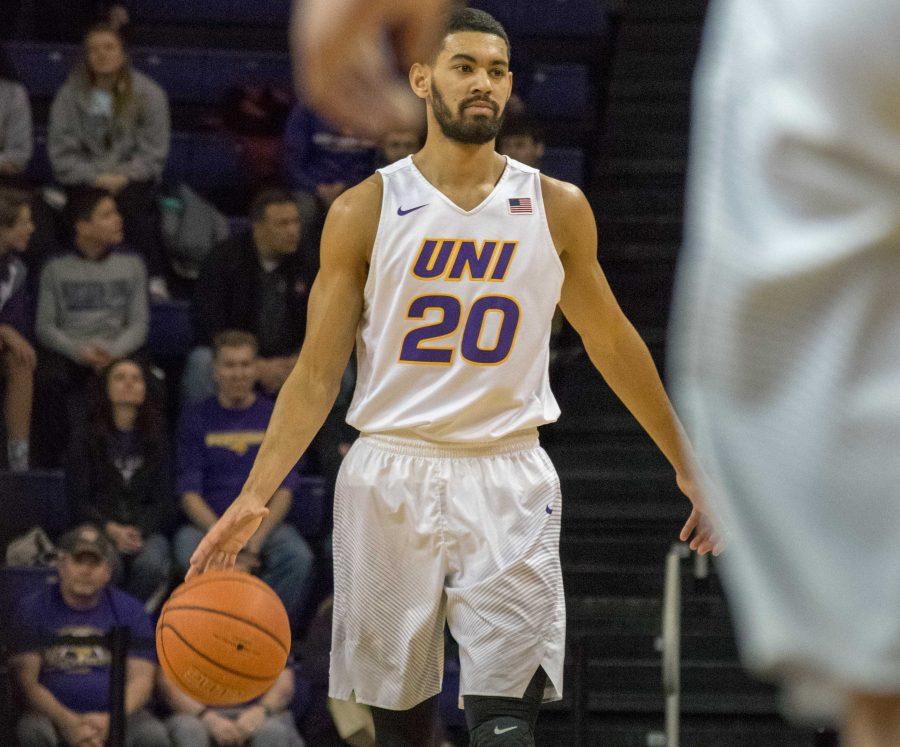 Senior Jeremy Morgan (20) walks the ball up the court against the Southern Illinois Salukis. Morgan currently leads the team with 352 points this season.

A total of 3,921 basketball fans piled into the McLeod Center Feb. 8 to witness UNI defeat Southern Illinois with a final score of 49-41. UNI scored 22 points in the first half and 27 in the second, compared to the Saluki’s 17 and 24.

The first points on the board for UNI came from a layup by Klint Carlson with just over two minutes played in the first half. After two more easy layups made by Bennett Koch and a mid-range jump shot from Carlson and Jeremy Morgan, UNI would take the early 10-6 lead with 11 minutes remaining until the halftime break.

UNI kept up their offensive pace, and outshot the Salukis 41.7 percent to 27.6 percent. Neither the Panthers nor the Salukis made a basket from downtown in the first half: both teams shot 0-7 from three-point territory.

Before halftime, UNI led 22-17. Southern Illinois very easily could have taken advantage of 10 Panther turnovers to possibly begin the second half with a smaller deficit. UNI, however, was able to amend their mistakes by outrebounding Southern Illinois 25 to 13.

The second half saw fewer turnovers for the Panthers and even featured seven defensive steals by Carlson, Koch, Morgan, Juwan McCloud, Spencer Haldeman (1 each) and Jordan Ashton (2). Southern Illinois was also able to stay in the game and forget about their nine turnovers after they grabbed six more rebounds than UNI (22 to 16).

Morgan came back from the break locked and loaded as he knocked down the first three-point basket by either team not even a minute into the second half. After Koch took a trip to the charity stripe and made his two free throws, Ashton missed his opening three-point attempt, but quickly redeemed himself from deep, connecting on his second attempt.

Halfway through the second half, Carlson remained aggressive inside the paint and after another good-looking layup, UNI took a 10-point lead with 10:54 remaining.

The Panthers had 16 total turnovers off of six assists, but after the break UNI had a better sense of when to pass and was overall just making smarter passes. Their eight total steals and four blocks helped them hold on to their lead. Without a solid defense against the Salukis, this contest could have been anyone’s victory.

On Sunday, Feb. 12, the Panthers traveled to Springfield, Missouri, to take on the Missouri State Bears. UNI would continue their win streak after they earned their 55-52 victory over the Bears.

With 6:20 left in the second half, UNI led 47-45. Morgan had already dropped 14 points, four rebounds and three assists. Koch recorded 12 points and seven rebounds while Carlson marked 10 points, three rebounds, a steal and an assist.

Missouri State’s starting five only contributed 18 points while 27 came from their bench with four minutes left in the game. UNI was the opposite, as their starting five dropped 46 compared to their bench’s six total points.

With 1:53 left to play, Morgan made one of his two free throws to give UNI a 55-49 lead. UNI was not able to score for the rest of the game, but did not let up on defense, and held the Bears to 52 points by the end of the contest and achieved their victory.

The men’s team will return to Cedar Falls for their next home game against Bradley on Feb. 15 — fans are encouraged to wear all black apparel. After their game against Bradley, UNI will hit the road and take on Wichita State, followed by Indiana State.

For the last game of their regular season, the Panthers will take on Illinois State at the McLeod Center before the State Farm MVC tournament begins on March 2.