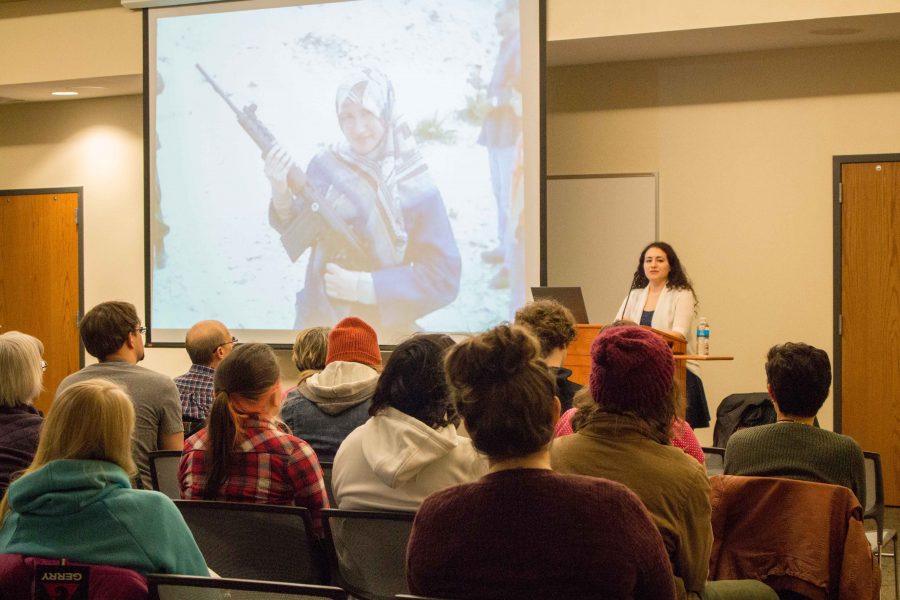 Conspiracies, GMO’s, beetles and superstitions are just a few of the topics permeating the minds of audience members as Darwin Week wraps up its annual lecture series.

Ending tonight with a lecture from a NASA engineer, Darwin Week will have covered topics ranging from biblical skepticism, fraudulent scientific research and alternative facts.

UNI Freethinkers and Inquirers (UNIFI) is the organization that hosts the series. Natalie Kaufman, UNIFI president, said she is very happy with the turnout so far.

“Usually our first date has lower attendance,” Kaufman said. “We got about 40 to 45 people for [Monday], and we got about 30 people for each of our day talks which is really good, especially for the first day.”

The lecture on Monday night was delivered by keynote speaker Kavin Senapathy. Senapathy shared passages from her book “The Fear Babe,” which illuminates the myths that consumers hold regarding the food in their grocery cart.

“The theme of this year’s Darwin Week is skepticism, and I think that food is one of those things that is in your face all the time,” Senapathy said. “I mean, you have to shop for food, you have to buy it, you have to eat it. And so, I think that critical thinking when it comes to food is really important.”

Sharing some misconceptions about the terms GMO, organic and local, Senapathy informed the audience on how to be a skeptical consumer.

Brandon Wittstock, a sophomore social sciences education major who was in attendance Monday night, discussed what he learned from the keynote speech.

“I learned to be a more conscious shopper and be aware of what I am actually putting into my body,” Wittstock said.

Senapathy said that, above all else, she hopes audience members learn to better acknowledge the food they do have.

“Appreciate the bounty that we have right now,” Senapathy said. “It’s actually a wonderful thing. This food [and] fear-based marketing has real world negative impacts that resonate worldwide.”

Another speaker from Monday was Justin Holmes, assistant professor of political science. Holmes presented on conspiracy theories in American culture. According to Holmes, half of Americans believe in at least one conspiracy theory.

Holmes said that those who have lower political trust, higher political knowledge and strong ideologies are more susceptible to accept conspiracies.

On Tuesday, Feb. 14, John Burnight, assistant professor of religion, gave a lecture on the biblical book of Job as it relates to skepticism. Entitled “The Book of Job as Subversive Literature,” Burnight shared how messages presented in Job were intended to question the prevailing ideology of the time.

By suggesting one should not adhere to religious dogma, the author of Job was able to cleverly insert this message of skepticism into the Old Testament, according to Burnight.

Tuesday night’s keynote speaker was Hiba Krisht, a former Shi’a Muslim from Lebanon. Krisht fell victim to Lebanon’s oppressive government, which had recently been rocked by a major civil war. As a result of this civil war, laws became stricter and heavily enforced and citizens reverted back to more conservative practices of Islam.

When Krisht was 18, she tried to run away from home. She disagreed with the way of life she was forced to live and wanted to escape. She was found and brought back to her home and was forced to stay there for a year, causing her to drop out of school. She felt like a “freak” because no one ever talked about people stepping out of line in the community. She felt as though she was the only one who felt strongly against the Muslim faith and tried to run away from it.

“I thought I was the only one,” Krisht said, before she found other apostates of Islam. The idea of renouncing the religion was so unthinkable in her country that it was unmentionable.

These lectures are provided to promote a variety of ideas and topics beyond just the development of physical science. According to UNIFI public relations director Casey McGregor, Darwin was a major catalyst in the field of evolutionary theory, but his contributions go beyond the study of natural selection.

“The purpose of Darwin Week itself is to celebrate the contributions that Darwin made — not necessarily in terms of science, but just in terms of making waves and being able to be skeptical of different things,” Kaufman said.

According to Kaufman, UNIFI is the skeptical group on campus and welcomes those who question everything from religion to politics and other prominent matters.

“[We are] a community of people that are willing to ask questions,” Kaufman said. “It’s not just atheists; we actually have other religions in the club. The point of UNIFI is not to just sit around and talk about hating God or hating religion. It’s kind of focusing on other aspects of life, such as critical thinking, skepticism, humanism — things like that.”

As the lectures conclude this evening in the University Room in the basement of Maucker Union with NASA aerospace technician Kathryn Crowe’s keynote speech, UNIFI hopes that the curiosity promoted during the event will resonate with the audience beyond Darwin Week.

“Our theme this year is skepticism,” Kaufman said. “So what we are hoping for from all of our Darwin talks is for people to walk away with some questions.” According to Kaufman, creating a line of thought that gets people thinking differently about issues is one of UNIFI’s main goals.

— Gabrielle Leitner contributed to this story