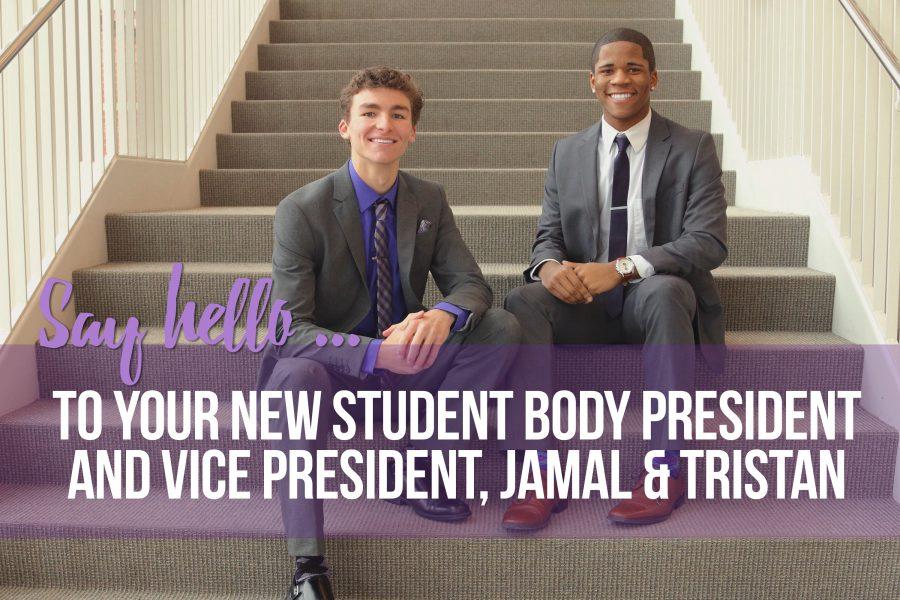 On Wednesday, Feb. 22, Jamal White and Tristan Bernhard were named the new NISG president and vice-president, respectively, for the 2017-18 academic year. Nearly 50 UNI students gathered in the main floor of the Maucker Union to hear the election results, which were announced shortly after 7:30 p.m.

“I’m astounded; I honestly can’t wrap my head around everything,” White said moments after the election results were announced. “I was anxious leading up to this point. I still don’t feel as though it’s real. We’re both very passionate about this university and very passionate about doing the things we want to do and accomplish in this position. So, I’m honored. I’m humbled to be given this opportunity, and I’m just super excited to get started.”

White and Bernhard’s victory comes off the heels of a months-long campaign.

“A lot of what students don’t realize is that months of preparation goes into something like this, and so the student body only sees two weeks of it,” Bernhard said. “But, after all that hard work, knowing that we’re going to get the amazing opportunity to represent students is really exciting. I can’t imagine knowing that I would get this opportunity when I was younger and just watching Panther games […] that I would get to represent the university in this fashion is a dream.”

“Thank you for all your support throughout this campaign, you have no idea how much it means to us. We will continue to serve our fellow Panthers in any way possible,” read the post.

White is a junior marketing and organizational leadership management double major, and Bernhard is a sophomore social science education major.

Throughout the campaign, White and Bernhard focused their platform around four main areas of concern: diversity and inclusivity, campus safety, student engagement and mental health. They also chose the phrase “Making the Best, Better” as their campaign slogan.

“I think that we ran on the idea of representing the entire student body, and so it just feels really good that that seemed to resonate with voters because we do feel that we have a wide representation on campus,” Bernhard. “So it’s really cool to see that turn-out on voting day.”

“I think the whole campaign process went well,” White said. “Obviously, with competing against somebody else, there’s going to be some back and forth, but I think that both tickets handled it very well. We really value the work that the other ticket brought to the table. Maggie and Danielle are outstanding students — outstanding leaders — and we value them.”

“I think the university would’ve been in really good hands no matter how this election went, but we’re really excited to have the opportunity,” Bernhard said.

Hunter Flesch, the current NISG president, echoed this sentiment, praising both tickets’ performances throughout the campaign.

“I think it’s a great result,” Flesch. “I think we were going to win either way with either of the candidates, so it worked out in UNI’s favor […] I’m just looking forward to a great next year.”

Cassidy Nulty, freshman textiles & apparel and digital media double major, was heavily involved in Miller and Massey’s campaign, and she considers each of them close friends. Nulty said she was surprised that Miller and Massey’s experience didn’t translate to the vote totals.

“I think that they were really going to help everyone in the community, the campus and Cedar Falls as a whole,” Nulty said through some tears.

“That’s probably the hardest thing for me in this election with the outcome — [White and Bernhard] are very deserving — but with the experience that Maggie and Danielle have, it’s just very surprising,” she said.

Nulty said White and Bernhard’s level of involvement, as resident assistants and in various campus groups, played a role in their win in addition to a well-run campaign.

“After this, I would hope and love to see [Miller and Massey] be involved,” Nulty added. “I think this is their true passion and … although they didn’t win this one, they can help the university in so many different ways.”

“I’m super glad that all of our hard work paid off,” Leonard said. “There was a ton of people involved, and, obviously, the outcome was what we hoped for, and it’s very exciting for us.”

As current NISG president, Flesch offered some words of advice for White and Bernhard before assuming office next year.

“I think that it’s one of those jobs where you really don’t know what it’s like until you’re in it, and so I’m going to be transitioning really, really closely with him,” Flesch said. “But the biggest piece of advice that I would give to Jamal and Tristan is just to listen. Just listen to students; listen to their upper cabinet, whoever they select. Listen to the senate that they’re going to be working with because you’re the voice of all students.”