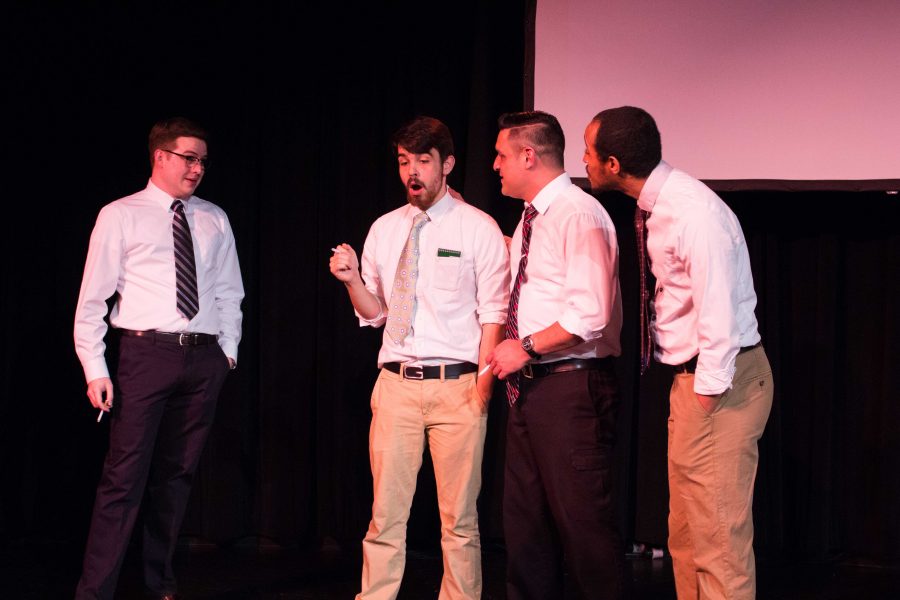 UNI communication and performance studies graduate student Ryan Courtney (pictured far left) wrote, directed and starred in the original play "Boys Will Be Boys" this past weekend at the Interpreters Theatre.

How does the problematic construction of masculinity adversely affect not only women, but the men who continue to assume these rigid gender roles?

The original play “Boys Will Be Boys” addressed this question and many more through a series of episodic scenes and vignettes that explored the ways in which we’re all taught what it means to “be a man” — and the various consequences that come with it.

The play premiered at the UNI Interpreters Theatre in Lang Hall this past weekend, running for three straight nights from Thursday, March 2, through Saturday, March 4.

The play was written and directed by Ryan Courtney, a UNI communication and performance studies graduate student. Following each performance, there were brief talkback sessions in which Courtney led audience members in a discussion about the themes and issues presented in the play.

Courtney, who also acted in the play, stressed the full complexity of these issues at one of the talkback sessions, saying, “To pinpoint one thing, and say that’s the problem, is easy.”

And Courtney certainly didn’t take the easy route when examining his play’s various themes. Indeed, “Boys Will Be Boys” embraced the full complexity of masculinity and didn’t shy away from a number of uncomfortable topics, including: cat calling, mass shootings and even rape.

It is important to note, though, that although “Boys Will Be Boys” explored such dark and unsettling subject matter, the play was still able to maintain a comedic tone throughout.

Now, while some might find this dichotomy between drama and comedy to be too jarring given the serious topics at hand, the humor never borders on the offensive. Thanks to Courtney’s sensitive and cleverly written screenplay, the laughter that the humor in the play elicited from the audience proved to be introspective, rather than mean-spirited.

As was discussed in one of the talkback forums held after the performances, numerous audience members reported feeling uncomfortable that they laughed during various moments in the performance.

This uncomfortable laughter then forced the question: how has the social construction of masculinity affected our own perceptions of what we find funny and, more importantly, what we consider to be acceptable behavior in our society?

Courtney was able to pose these questions to his audience by focusing in on two main stories. One of them involved a teenager whose perception of masculinity is compromised by his parents and best friend, while the second story featured a group of male office workers who engage in sexist behavior towards their female colleagues.

The first subplot is definitely the weightier of the two, as the teenager, named Sam (played by Ryan Hansen), comes to realize that his perception of masculinity and what it means to “be a man” greatly differs from that of his family and best friend Danny (Caleb Rea).

While the actors in this subplot did get several opportunities to flex their comedic muscles (most notably, Courtney as Mike, Sam’s clueless and overcompensating father), the humor in this story was effectively juxtaposed with a surprising, dark and genuinely moving climax.

As for the second subplot, this was where much of the aforementioned uncomfortable laughter came into play. There was one scene in particular in which an office worker named Todd (Joseph Robledo) was throwing pieces of crumpled up paper at his co-worker Kim (Mallory Park) while engaging in cat calling.

Although this behavior is obviously unacceptable, the audience still let out plenty of awkward chortles and chuckles throughout the scene.

Whether this laughter came as a result of Courtney’s script, the actors’ performances or the audience’s own learned perceptions of acceptable masculine behavior, this was just one of many moments in the play in which the audience was forced to not only analyze the performances on stage, but to recognize how they, themselves, perform in everyday life.

In addition to the play’s fine balancing act between humor and drama, “Boys Will Be Boys” moved along at a brisk pace and never felt sluggish. To be sure, this pacing can be attributed to the play’s episodic nature, as well as to the use of in-house produced video segments.

These short videos, which played on a screen in the Interpreters Theatre between scenes, mocked and satirized current events related to masculinity, such as random mass shootings and President Trump’s frankly detestable behavior towards women.

In short, “Boys Will Be Boys” successfully conveyed the complex nature of societal masculinity, thereby challenging audience members to question their own perceptions of gender roles.

Courtney’s willingness to fully embrace this complexity, while also deftly balancing drama and humor, makes “Boys Will Be Boys” a uniquely insightful, daring and absorbing glimpse into what it means “to be a man” and — more importantly — to be a human being.