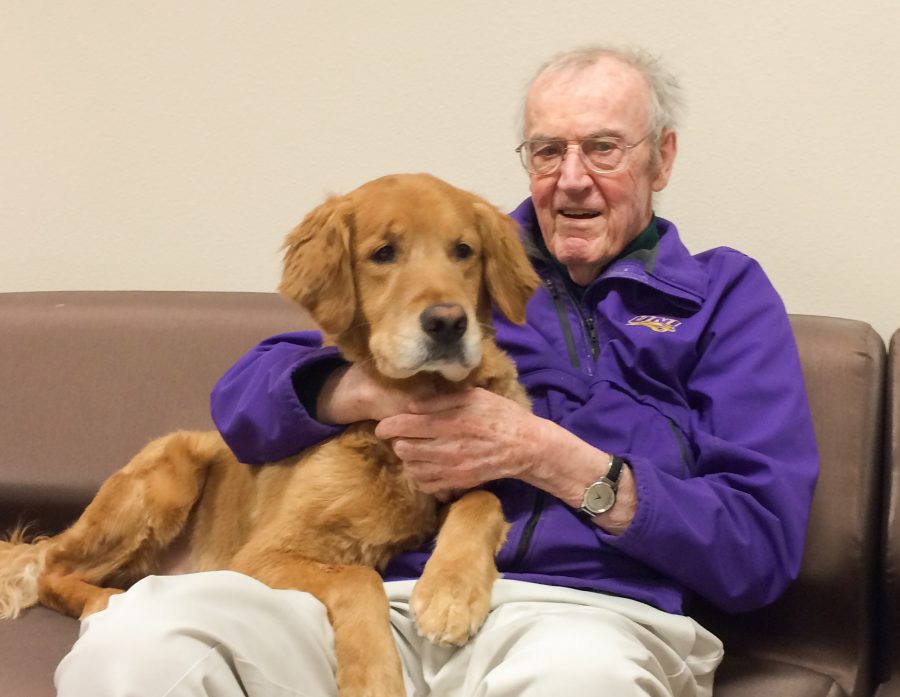 Donald Shepardson, pictured with history department head Robert Martin's service dog Nick, taught at five different universities in his lifetime. He began teaching at UNI in 1970 and specialized in military and diplomatic history.

Remembering the life and legacy of Donald Shepardson

Shepardson received his B.S. from Eastern Illinois University, and both his M.A. and Ph.D.  from the University of Illinois, Urbana-Champaign.  Shepardson taught military history and diplomatic history in addition to LAC humanities courses, making Shepardson many students’ first impression of UNI.

“He wanted to die in the harness,” said Reiner Hesselink, a professor in the history department. Hesselink explained that Shepardson never wanted to retire and that he was a 47-year fixture of the department.

In addition to his service in the UNI history department, Shepardson served in the US Air Force during the Korean War, according to his obituary. According to Hesselink, that military service partially inspired his specialty in military and diplomatic history.

Shepardson published two books as a scholar: “Conflict and Diplomacy from the Great War to the Cold War,” 1999, and “Rosa Luxemburg and the Noble Dream,” 1996.

According to Hesselink, Shepardson’s military service and scholarly study greatly impacted his view of war. Hesselink described Shepardson as a pacifist, saying “he was very much against this projection of [American] power overseas.”

“He was an exceptionally good departmental citizen,” Martin said. “He was somebody you always knew you could count on.”

According to Martin, Shepardson was incredibly generous with his time, both with his students and his colleagues.

Martin recalled that even as his health declined, he thought of his students.

“The morning before he died, he called me about seven o’clock in the morning. He told me he had called an ambulance to take him to the hospital,” Martin said. “What he seemed most concerned about was that he had scheduled a test for his eight and nine o’clock classes and he was very worried that those students were going to come for their test and there wasn’t going to be anyone there.”

According to Martin, that concern for students was typical for Shepardson.

“He was very student oriented in a kind of quiet way,” Martin said. “He wasn’t dynamic, he didn’t fraternize with the students that much, but he was almost always here and his door was always open.”

Martin described Shepardson as thoughtful in all of his affairs, as well as intellectual in a quiet, humble way.

“I would love to have a department full of colleagues like Don,” Martin said. “I’ve got good colleagues, but he knew the history of the institution and the department in a way that nobody else did.”

“You may not always agree with him,” Martin said. “But you knew he was a person of great integrity. I’m going to miss him a lot.”

According to Hesselink, Shepardson also had a passion for tennis, where he was known for his hard hits. Shepardson also reportedly held that American cinema had reached its zenith with “High Noon,” a 1952 Western Drama.

“Maybe his students should watch that movie to honor him,” Hesselink said.

“He loved this place,” Martin said. “He told me — actually a week or two before he died — that this was a good place, that he was glad that he had spent his career here.”