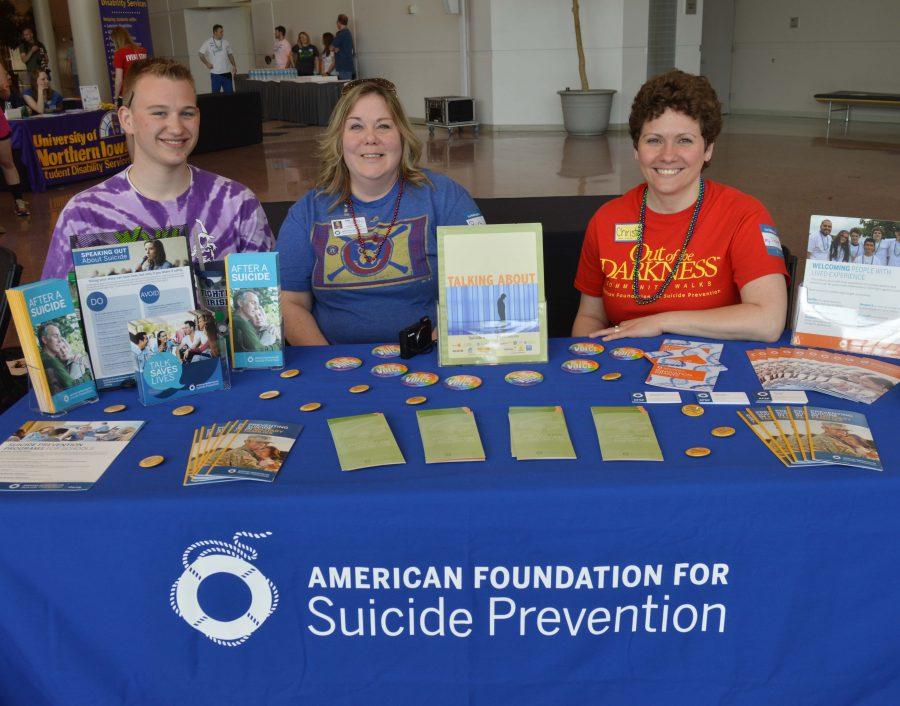 Christy Kessens (pictured right) serves as the public policy chair on the Iowa board for the American Foundation for Suicide Prevention (AFSP). Kessens worked to bring the first Out of the Darkness Campus Walk to UNI four years ago.

This Saturday, April 1, the UNI chapter of Chi Sigma Iota (CSI), an international honor society for counselors, will be teaming up with the American Foundation for Suicide Prevention (AFSP) to bring the Out of the Darkness Campus Walk to UNI.

The event, which will be held at the Gallagher Bluedorn Performing Arts Center (GBPAC) from 1 p.m. to 4 p.m., aims to raise funds for AFSP, as well as raise awareness for suicide prevention in general.

For the UNI community, the issue of suicide prevention hits particularly close to home.

“As you know, there were a couple of suicides on campus last year, and quite a few in the community in the past few years,” said Paige Hildebrant, the marketing coordinator for Saturday’s event. “It’s a topic that’s very real, but people have a hard time acknowledging it or talking about it because it’s a sensitive subject. People don’t know the right way to talk about it. And so, I think a big goal of this event is to be able to have people come and feel comfortable.”

According to Hildebrant, there will be numerous activities and resources for attendees at the event leading up to the walk.

During the first hour, from 1 p.m. to 2 p.m., there will be resource providers available for participants, as well as memorial activities and a silent auction. Next, guest speaker David Romano from Active Minds, a national organization that focuses on educating the public on mental health, will be speaking at 2 p.m.

“[Romano] is going to be talking about his experience with mental health and a suicide attempt that he had in high school,” Hildebrant said. “And after that, it will be followed by a Q&A for anyone in the audience who wants to ask him something.”

After this guest speaker, attendees will participate in the campus walk, the namesake of the event. The three-mile walk will consist of two laps around UNI’s campus and will end back at the GBPAC, at which point CSI will reveal the total amount of money raised for AFSP.

According to Aubrey Davis, the philanthropy chair for CSI, 50 percent of the money raised through the event will stay in the local Iowa chapter of AFSP, while the other 50 percent will go towards the national organization as a whole.

Davis said this money will be allocated towards various efforts related to suicide prevention, including: educational programs, support group training and research.

“And then, it also creates awareness, and that’s really important,” Davis said. “A lot of times, with mental health, it’s so stigmatized that we don’t really open up to people about what’s going on. We just kind of isolate, and it makes things worse.”

Christy Kessens, the public policy chair on the Iowa board for AFSP and an adjunct instructor at UNI, aimed to raise such awareness when she decided to bring this event to UNI’s campus for the first time four years ago.

“About four years ago, in my [Perspectives on] Death and Dying class that I was teaching, I did an anonymous survey and talked about suicide,” Kessens said. “We found out that there are a lot of people affected. And then, because it’s the second-leading cause of death for college-aged students […], I decided I needed to do something. And so, I started volunteering for AFSP and doing advocacy work and brought the idea of a walk to campus.”

According to AFSP, suicide is the second leading cause of death among people ages 18 to 24.

Kessens went on to discuss her own personal connection to suicide and mental health.

“I have depression and anxiety, and I have since I was in high school,” Kessens said. “And my college [years], like 18 to 21, that was the hardest time I had when it came to my depression. So, I feel like I can relate to my students because it is so common, unfortunately, and I know how hard that can be. I have also lost a loved one to suicide, and so I know that aspect of it, too.”

Kessens said attending the annual campus walk has helped her over the years and encouraged students to attend the event on Saturday.

Hildebrant said students can register and donate at the same link, which is tinyurl.com/uniwalk17. According to Hildebrant, registering for the event is free, and participants will get a donor drive set up in their name when they register.

“You can start having people donate to your page,” Hildebrant said. “But there’s also a link if you just simply want to donate, too.”

Hildebrant said all students should register regardless of availability, as there will be the option to be a “virtual walker.”

“I think the biggest thing is just getting people signed up,” Hildebrant said. “And whether they can be there or not, either way, just acknowledging that this is an important topic to them is our goal.”