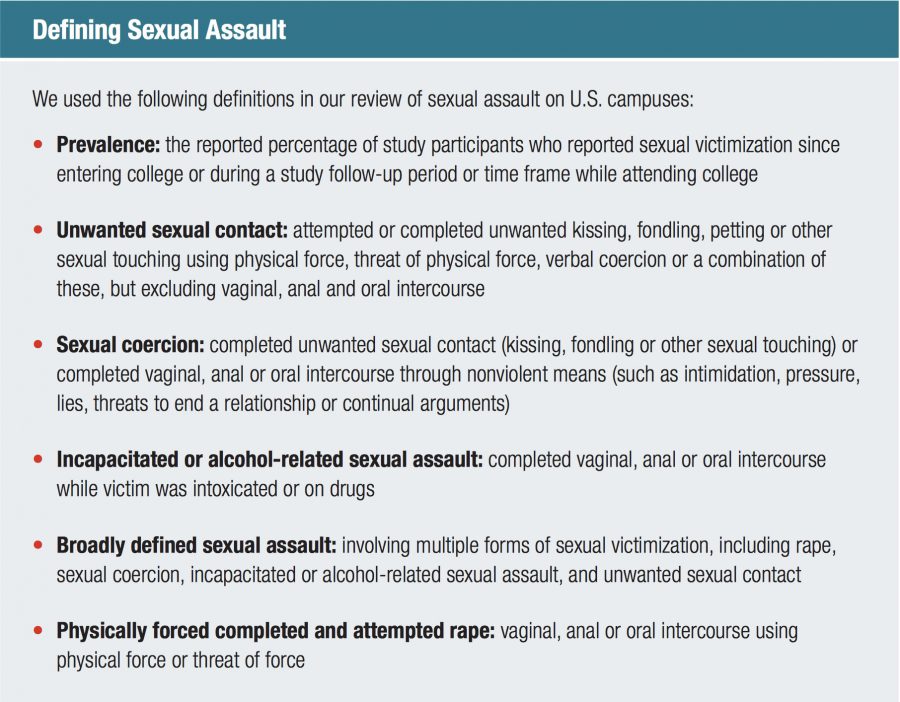 The National Institute of Justice (NIJ) cites a study by Lisa Fedina, Jennifer Lynne Holmes and Bethany Backes using this definition of sexual assault. The full study, "How Prevalent Is Campus Sexual Assault in the United States?" was published in 2016.

The following piece is in response to Kyle Day’s “Bad studies don’t help rape victims.” In the article, Day recklessly addresses the “1-in-5” statistic regarding the prevalence of campus-related sexual assault.

In a perplexing attack on the research behind this particular statistic, Day confuses the subject at hand. He fails to identify sound methodology, appreciate awareness campaigns, discern sexual assault from rape (while simultaneously refusing to accept the definition of sexual assault) and his piece fails to adequately address the nature of sexual assault and rape as the most severely underreported crimes in the US.

As careful readers have pointed out online, Day’s piece perpetuates a veiled sexism wrapped in a sophisticated attempt to question a statistic widely accepted (for good reason) by experts. Whether he meant to or not, his piece participates in the normalization of sexual violence and downplays the prevalence and experience of traumatic crimes that, as a man, Day is less likely to ever endure. Do not be fooled — this is incredibly consequential and dangerous, as Day has demonstrated.

Day isn’t alone. Men everywhere choose to look past the reality of sensitive and complex consequences of specific experiences and speak out on subjects that they seem to know very little about. The name for this behavior is “mansplaining.” It is never productive and regardless of intention it often times works to perpetuate the very culture that fosters such high frequency of sex crimes.

Don’t let any person get away with explaining an experience that they do not fully comprehend — challenge them. Because it. Is. Dangerous.

As an individual that is passionately pursuing both sociology and criminology, and having experienced encounters of sexual violence, I feel qualified enough to address two significant errors in Day’s reasoning. First, the Bureau of Justice Statistics, which bases their research on official crime reports, is not the most reliable source for estimates on rates of sexual assault. The institution itself acknowledges their inability to produce accurate statistics on the prevalence of rape and sexual assault, as sex crimes have the lowest official reporting rate.

Here are some reasons why it’s so severely underreported: survivors may fear being blamed for involvement (for example, referencing the “sociologically-established link between sexual assault and alcohol consumption” when discussing what’s good for “rape victims”), survivors may not report their experience for fear of reliving it when testifying in court, the survivor’s perpetrator is likely to be an acquaintance, if not a family member or friend, these perpetrators are highly unlikely to be indicted and sanctioned for the crime anyway, and ignorance of what constitutes sexual assault keeps people from reporting that they’ve been violated.

The second error I’d like to address is Day’s dismissal of the need for awareness campaigns. Without defining and publicizing what constitutes sexual assault and rape, survivors everywhere would go without knowing that these acts have been committed against them.

Take, for example, the fact that the National Institute of Justice recently published research that suggests that sexual violence perpetrated by acquaintances and intimate partners has been on the rise since the seventies. Consider for a second that this increase may have something to do with changing definitions and increased awareness of what rape and sexual assault are.

I’ve come to understand that a significant display of decency is learning when it is appropriate to voice your advice and when it isn’t. Let Day’s column be an example of indecency, then, and we must not let it go unanswered. The real lesson we take from Day’s column is that we cannot let misguided voices speak for us; we must call them out.