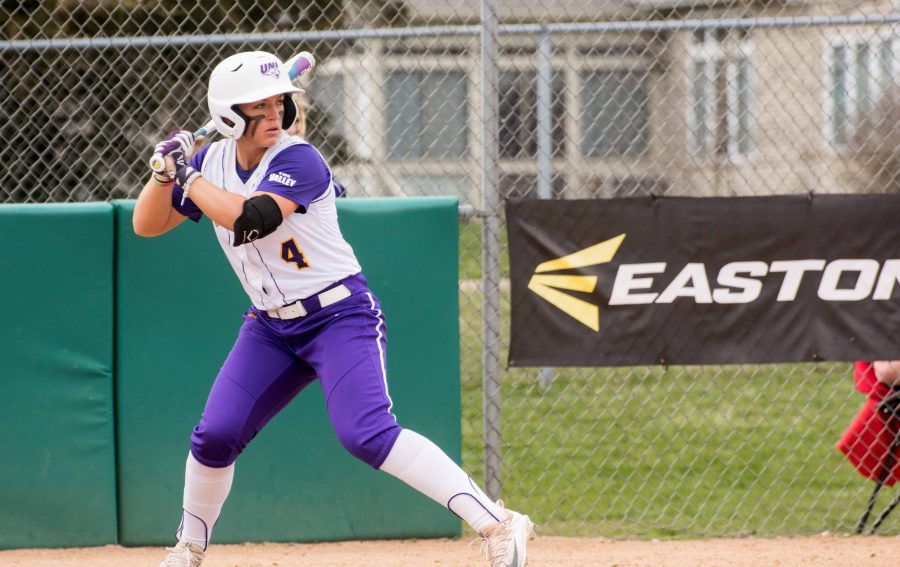 The Northern Iowa softball team faced off against the Southern Illinois Salukis (SIU) this weekend. The doubleheader on Saturday was dubbed a “Bark in the Park” day, as UNI dog owners were able to bring their four-legged friends to see a role reversal of nature: the cats beat the dogs in both of Saturday’s games.

The first game on Saturday helped solidify freshman pitcher Jaci Spencer’s role as a dual threat, both on the mound and in the batter’s box. She pitched a shut-out and allowed only three hits, managing to strike out nine batters.

Despite just two at bats Spencer hit a solo homer to lead-off the sixth. While Spencer closed the game with a score, it was junior Kennedy Bailey who started it off in the second with an RBI double that scored freshman Sammey Bunch.

Bailey helped widen the gap further in the fourth inning with another double, scoring Bunch once again, and her hit also got senior Anna Varriano across. All told, the game showed solid efforts on both sides and was a great start to the day as UNI won 4-0.

The late game continued the solid performance from the first game. Senior Alyssa Buchanan has a team best 1.94 ERA and holds the best record on the team at 8-1. Buchanan started the scoring in the second on a fielder’s choice that got Varriano across.

Junior Brittney Roby continued the scoring with a two-RBI double that scored both Buchanan and Bunch. However, Buchanan was unable to maintain the shutout as SIU snuck one across during the fifth.

The bottom of the fifth, however, saw freshman Jenny Kohl pinch run, but it was not needed as Varriano blasted a two-run shot to center.

The Salukis were able to get one more run on a solo blast midway through the seventh, but was unable to start a rally. UNI won, 5-2.

By the end of the Saturday UNI had surpassed 20 wins on the season and was tied for first in the Missouri Valley Conference with Wichita State, Illinois State and Missouri State at 8-4 in Valley.

Sunday’s final matchup against the Salukis was a grinder as both teams were scoring consistently throughout the entire game. There were 13 total runs scored by UNI and SIU, but by the end of the afternoon, the Panthers and would lose their first game of the series with a final score of 7-6.

Southern Illinois took an early lead in the first inning and transitioned to the bottom of the first leading 3-0. Macey Wolfe singled towards shortstop, Roby was out at second but Brittney Krodinger was batted in, reducing SIU’s lead to just two runs.

Bailey followed-up with a single of her own and Wolfe was able to score on the RBI. Now, only down 3-2, Bailey Lange opened the bottom of the second inning with a solo homerun to tie the game. Lange hit another homerun later in the third and this time, three runs were earned as Bunch and Bailey made it to home base as well.

By the end of the third inning the score was 6-5, and the Panthers were leading. Southern Illinois scored once in the fourth to tie the game, then no more runs were scored until the seventh inning when SIU won the game with a double to left field.

The next game on tap for UNI is an in-state battle against the University of Iowa on Tuesday. The Panthers then wrap up their 10-game homestand this weekend against the Bradley Braves.