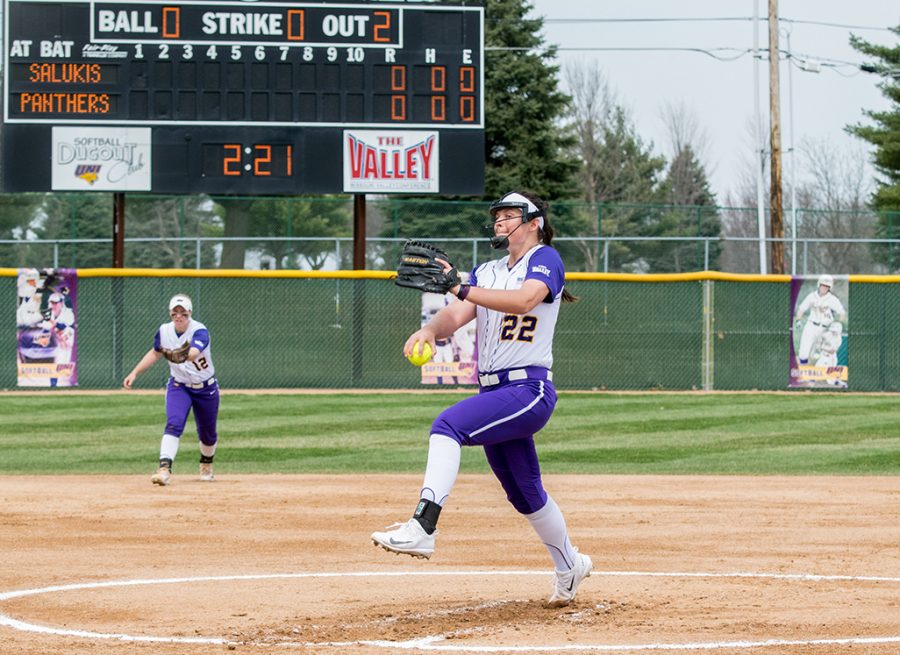 The Northern Iowa softball team left the Robinson-Dresser Sports Complex behind this last weekend and spent some time in the UNI-Dome. The change of scenery was just what the doctor ordered, as the Panthers reached second place in the Missouri Valley Conference (MVC), one game behind Illinois State. Cedar Falls continues to be the team’s preferred venue, as they are now 12-3 at home, after sweeping Bradley University last weekend in a three game series.

The first half of Friday’s double header proved to be a tightly contested defensive affair. Freshman Jaci Spencer only allowed four hits and, besides a bases loaded scenario in the first for UNI, neither team posed many offensive threats.

The lone score of the game came in the bottom of the seventh. Junior Kennedy Bailey reached on a single, and sophomore Courtney Krodinger came into a pinch run and stole second. Freshman Tiana Drahn hit  a sacrifice bunt (sac-bunt) that advanced the runner to third, also setting up Brittney Krodinger, who hit a walk-off double, with a final score of 1-0.

The second game went much the same as the first, minus late game suspense. Senior Alyssa Buchannan continued to prove why she is UNI’s number one option, by earning a three hit shutout at the mound.  Buchannan currently holds a team best 9-1 record and 1.75 ERA. This game had all of its runs come in one inning, all of which appeared during the fourth inning.

Senior Macey Wolfe singled to start the inning, which was preceded by a double from Bailey.

Sophomore Bailey Lange drew first blood by launching a three-run homer to bring her teammates in. Buchanan had a quick offensive transition as she was able to bring in freshman Sammey Bunch. Brittney Krodinger followed suit by bringing in Drahn to complete the six hit five-run inning, final 5-0.

The series ended on Saturday and proved to a shootout. Bradley struck first with an RBI single in the first. They grew their lead in the second with six hits, aided with three errors and upped the score 5-0.

The second inning also saw UNI strike back with a Lange two shot homer that brought in senior Anna Varriano. UNI inched closer on a Wolfe single that scored junior Brittney Roby. Brittney Krodinger tied the game at five, all with her own long ball that scored Bunch and herself.

A seventh inning error saw Bradley score three runs on one play; only one was earned. A leadoff single by Drahn opened the bottom half for another two-shot homer from Krodinger to pull within one. With no outs and nobody on, Roby was able to hit a single to set the stage. The game winning run at the plate saw no outs, then Wolfe swung for the fences and reached them. For the fourth time that game, UNI hit a two run home run and won 9-8.

UNI plays at Drake on Wednesday for two games and then travels to Loyola for a three game series.