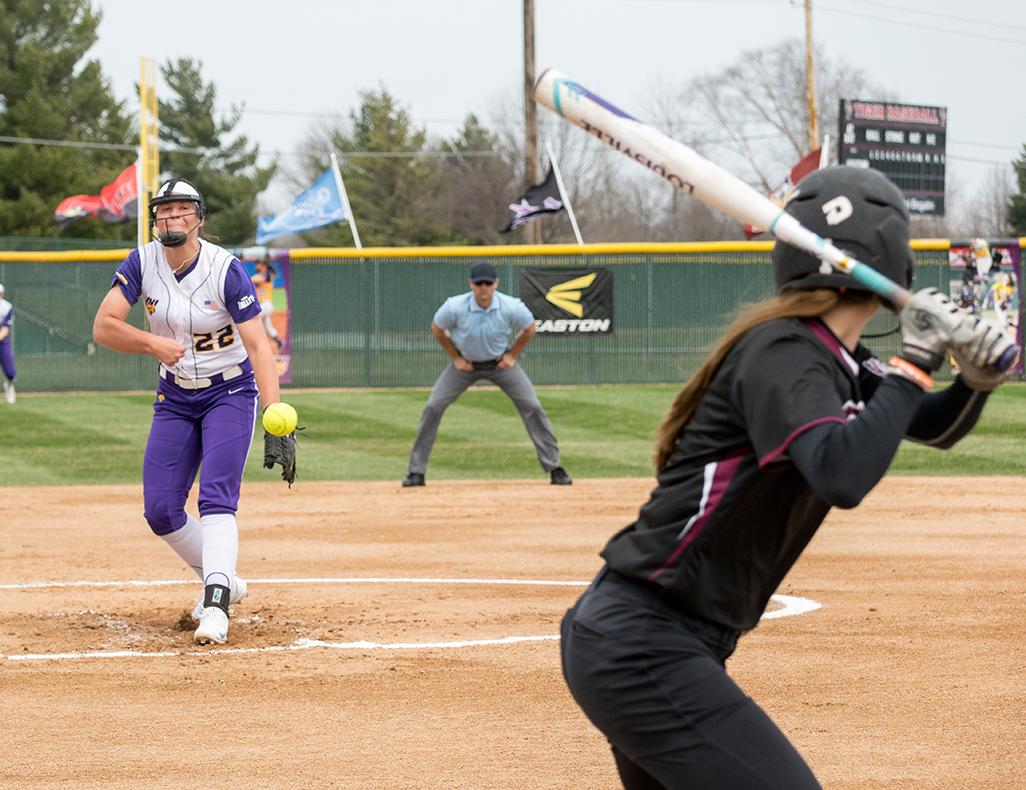 Alyssa Buchanan (22) lets one go against the Drake Bulldogs during a previous home game in Cedar Falls. These two teams played three times this season. UNI took all three games, scoring 3-0, 12-0 and 5-2.

After a semi-impressive 3-2 road trip for the Northern Iowa Softball team, the Panthers were itching to get back home to friendly confines. Even if it was only for one game, UNI righted the ship after two straight 1-0 losses to Loyola, and the Panthers completed the season sweep against in-state Missouri Valley rivals, the Drake Bulldogs. It proved to be the closest match of the season between the two as Drake scored their only runs against UNI on the season in their Tuesday showdown.

The game saw a slight build as both teams entered the third inning. Neither team advanced much as senior Alyssa Buchanan mowed batters down at the pitcher’s mound and Drake’s all around defense kept it scoreless. The top of the third inning saw Drake break the deadlock with two runs, thanks to some timely singles.

The Panthers wouldn’t let it stop their momentum as freshman Ashley Chesser earned a single of her own to bring in junior Brittney Roby. After a three-and-out fourth, UNI took the lead thanks senior Macey Wolfe scoring Buchanan on a single only to get brought in by senior Anna Varriano’s single, just two at bats later.

Freshman Sammey Bunch distanced the gap in the sixth inning thanks to a triple that got sophomore Brooke Craig across. She was then singled in by Buchanan to gives the ultimate score of 5-2. Buchanan cleaned the top of the seventh efficiently thanks to strike out, a pop up and a grounder. The game gave Buchanan a nice bounce back win after going the distance against Loyola for nine innings. She improves to 9-2 on the season with 1.58 ERA.

UNI will play at Iowa State as a makeup game this Wednesday, once again for one game only. The weekend series will see them match up at home against Wichita State, a double on Saturday and the final on Sunday. It will be Senior Day and UNI will have one more series afterward before tourney play.