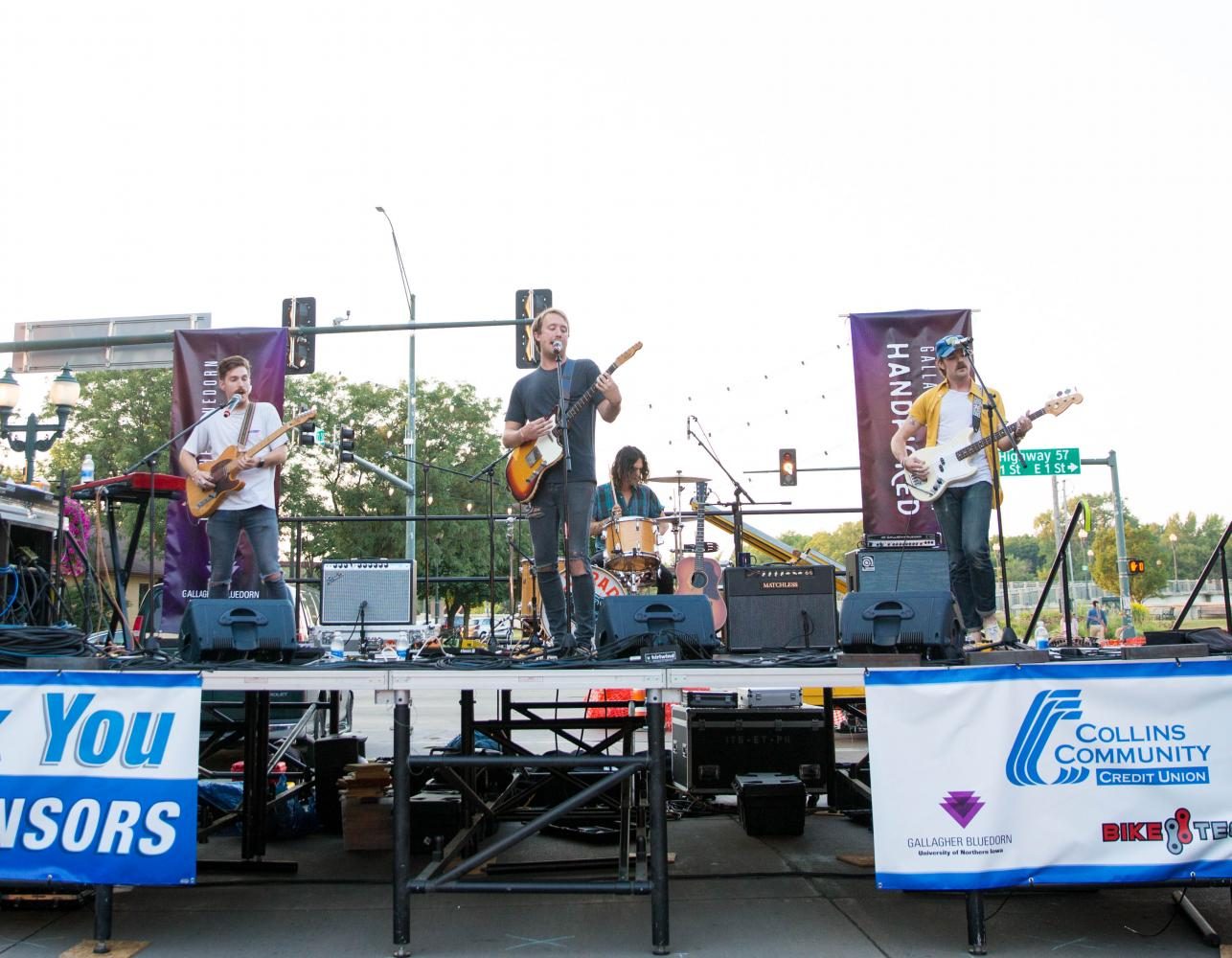 Community members flocked to Main Street over the weekend for a bicycle race and live music, and the opportunity to drink beer in the street.

The stage was set up in front of Cup of Joe coffee shop on Main Street, against the backdrop of a towering sunset ushering in the night sky. Members of the community sat on the curbs and in lawn chairs, and people danced up near the stage enjoying a night filled with free live music.

Initially, Gran Fondo Fest consisted of a bike race in the morning, followed by CrossFit and then a street festival in the afternoon. The staff at Gallagher Bluedorn began to see the event as a potential place to bring more bands into the Cedar Valley.

“Gallagher Bluedorn seeing this and wanting to bring more events into the community, [we] thought it would be a great idea to showcase some cool bands in a really cool setting,” Argotsinger explained.

Argotsinger originally had different entertainment lined up — a performance art group, which ended up falling through. They decided to book another band through the Handpicked Series for the event instead.

The Handpicked Series launched in December of 2015, and has brought acts to GBPAC such as Kishi Bashi and Cloud Cult, as well as Margaret Glaspy to the Octopus on College Hill. The bands that are brought to town as a part of the series are directly influenced by the community.

“We have a pretty big list of bands that we like, that the community has voiced interest in and want us to look for when they’re routing through,” Argotsinger said.

This is how GBPAC sees what bands present themselves as viable options.

“I went through and listened to the bands, because some of them we didn’t know but were similar to the ones we liked,” Argotsinger said. “Wilderado was one that stuck out in front of the Fondo Fest board, and we liked them. So, we booked them.”

Wilderado is made up of four members: Max Rainer, Tyler Wimpee, Justin Kila and Colton Dearing. The members of the band are originally from small towns in Oklahoma and Texas and went to college together at Baylor University, but they all moved to Los Angeles around the same time and reconnected.

They described their sound as “rock and roll with big melodies and big harmonies.” They are influenced by a variety of different music, but they expressed particular admiration for Kings of Leon, Band of Horses and the Beatles.

It was the band’s first time ever performing in Iowa, with a stop the following day in Davenport at Triple Crown Whisky Bar and Raccoon Motel.

“This is our first time. We love it. [It] kind of reminds me of my hometown,” said Wimpee, guitar player in the band. “It’s a treat to come to these small little towns because we’re from relatively smaller towns. It’s so much more exciting to be in a little town.”

The band as a whole agreed that small towns are better to play in because the community appreciates the bands that come through so much more.

“Bigger cities are harder because they’re spoiled rotten,” said Max Rainer, the lead singer. “It’s more like a test than it is a show. You’re just being so evaluated.”

The members of Wilderado went on to discuss their unique name, explaining that, initially, the band was called Bird Dog. However, they had to change their name because a band in New York already had the name.

“They reached out and threatened us with a cease and desist, because they had the name first,” Rainer said.

They had a difficult time finding an original name for the band that everyone liked, but they finally came to a conclusion.

“We were driving through Texas and we saw Wildorado, and it just kind of clicked,” Wimpee said.

Wildorado is a small town in Oldham County, Texas, with a population of only 180.

According to the band members, Wilderado will be heading up to Seattle, Washington to begin recording new music on Sept. 2.

Argotsinger said that he thought the event was successful and he sees GBPAC collaborating with Fondo Fest again in the future.

“We were happy that the Handpicked show could work out for it. Everyone was super happy with it,” Argotsinger said. “All of the organizers were really happy, and the people that I talked to, I think they became fans too.”

“Cedar Falls was a great experience all around! We had superb Thai food, met the nicest people and felt like we were apart of the family for a night,” said Dearing. “It was really rad.”