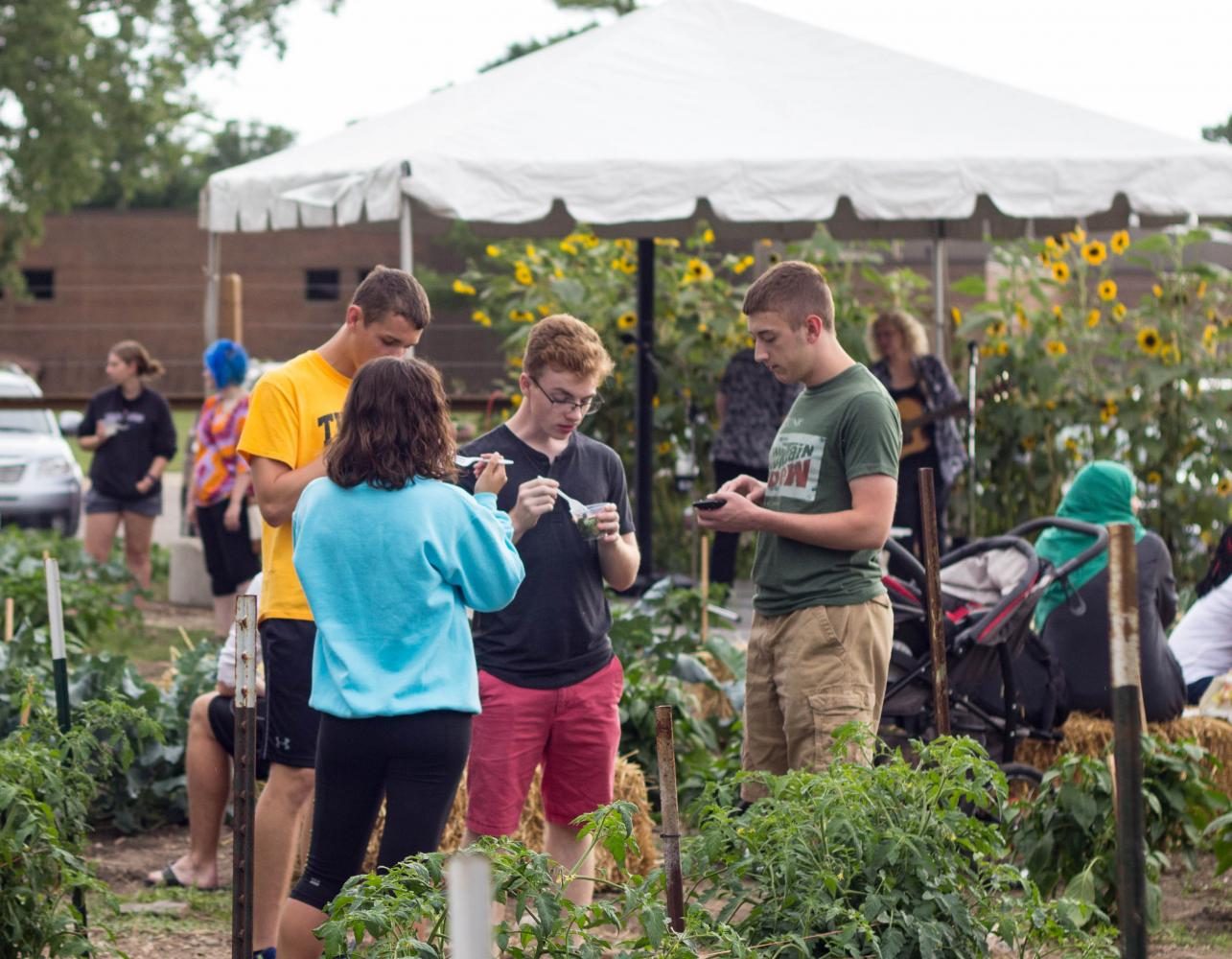 Students gathered at Panther Plots last Thursday for the fifth annual Harvest Festival, where they feasted on vegetables from the garden and enjoyed live music.

The fifth annual Harvest Festival, hosted by UNI Green Project, did not let a bit of rain dampen their celebration of cultivation. As nearly 500 people gathered at Panther Plots, located behind the Biology Research Complex, on Thursday, Aug. 24, sweet citrus was sipped and fresh molasses was mashed.

Lily Conrad, vice president of UNI Green Project, was pleased with the turnout for the event.

“The entire festival was alive with a healthy flow of people visiting the garden, socializing, and learning about sustainability on campus,” Conrad said.

UNI Catering provided several dishes, including vegetables from the garden, such as potato and green bean salad, cucumber salad and blueberry zucchini muffins. Basil picked from the garden was also served in lemonade, alongside raspberry iced tea.

“Additionally, the La Calle food truck was parked in the garden and was serving Venezuelan corn-based dishes: elote and cachapas,” Conrad said.

Marco Perla, a sophomore earth science major, was one of the many students in attendance.

“The food smells and tastes amazing,” Perla said. “Everyone seems to be having a good time. Even though it is raining, it doesn’t seem to be bothering anyone.”

While visitors strolled through the brick-lined paths of produce, the scent of sunflowers and sound of folk music all contributed to a welcoming and relaxing atmosphere, according to Emily Winker, junior leisure, youth and human service major.

“It is a very laid-back atmosphere,” Winker said. “I feel like everyone is enjoying themselves, and it’s a good break from the first week of classes. It’s a very good end to such a busy week!”

The music for the evening was provided by local artist Karla Ruth and featured Deb Niermann. Accompanied by acoustic guitars and a mandolin, the two sang original music, as well as some covers.

“We [Green Project] work in conjunction with the Office of Sustainability to maintain the Panther Plot and directly involve students during the growing season,” Ruggiero said.

Eric O’Brien, the director of the Office of Sustainability, said the garden is typically maintained by 12 to 15 volunteers and two to three employees during the summer. He said many of the volunteers that do contribute to the garden are people who are walking by and end up stopping for a few hours to pull weeds or water the plants.

“Every year at the Harvest Festival, we see old and new faces, including students, faculty, staff and community members,” Ruggiero said. “We encourage everyone to go and relax in the garden […] The Panther Plot belongs to everyone in the UNI community.”

The garden, which was developed in 2013 by a group of Presidential Scholars, has undergone a five year plan that O’Brien said is nearly complete.

According to O’Brien, the funding from the garden initially came from two university sources. The Sustainability Office was the primary provider as the garden established its foundation and, after it proved to be successful, the Northern Iowa Student Government (NISG) contributed funding.

As Panther Plots continues to be a success, O’Brien shared his vision for the garden in the upcoming years.

“Five years from now, I hope we get to the point where students are coming up with unique ways to make this garden financially sustainable, independently from its preliminary contributors,” O’Brien said. “We are trying to move toward a self-sustaining model.”

With increasing support and exposure from students, faculty and community members, Green Project hopes to share their spirit for sustainability by collaborating with on-campus organizations in the future. Ruggiero said the group also plans to host regular sustainability-oriented volunteer opportunities throughout the year.