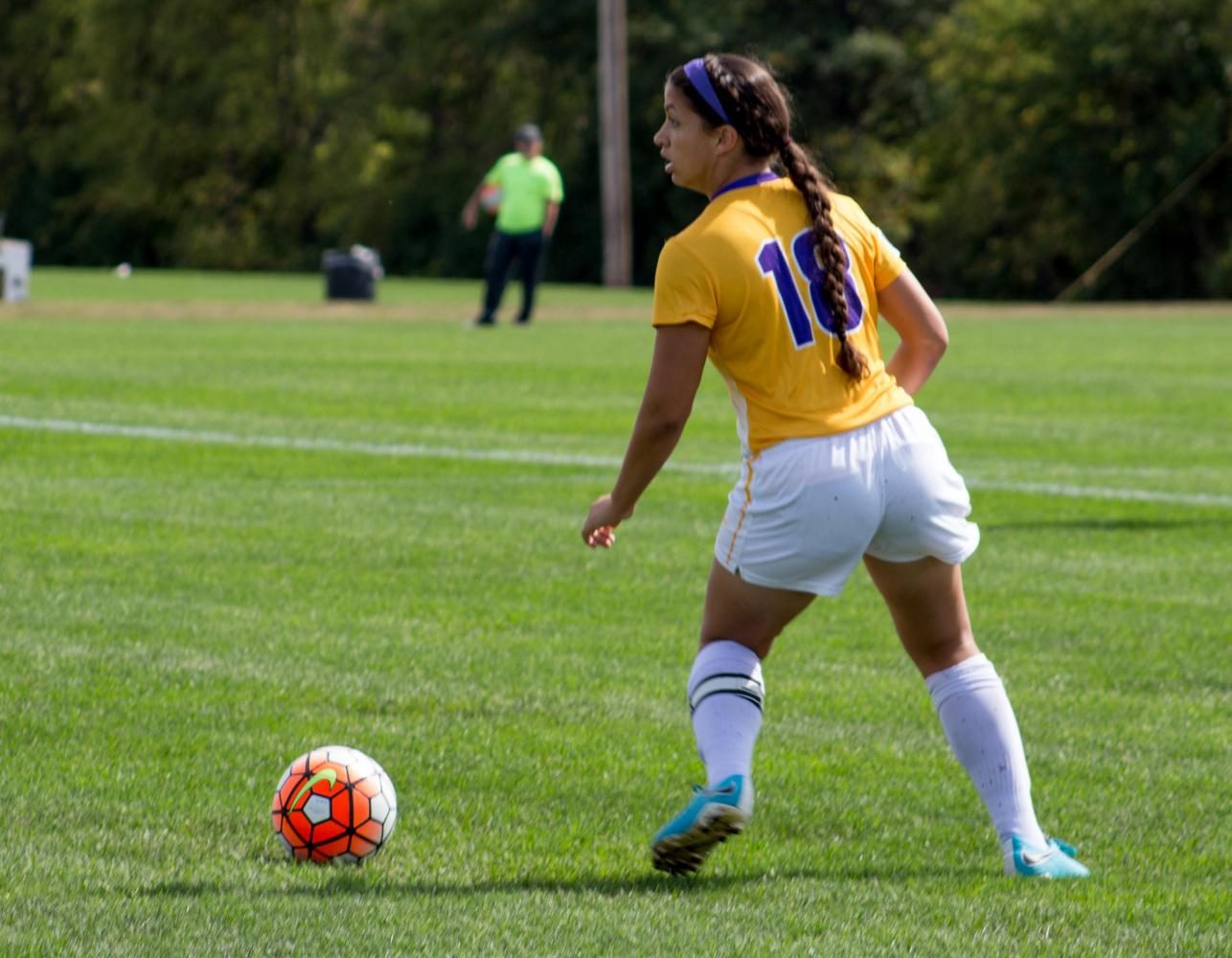 Kelsey Hansen (18) scans the field for her next move.

This past weekend, the UNI women’s soccer team took the pitch for two important match-ups to complete the bulk of their non-conference schedule. The Panthers managed to walk away with both a win last Friday night and a tie Sunday afternoon to elevate their record to 7-1-1.

Friday night’s game saw the Panthers hit the road to DeKalb, Illinois to take on the Northern Illinois Huskies (3-2-1). UNI struck first in the 33rd minute when freshman forward Johnnie Hill netted the first goal of her collegiate career.

Senior Sarah Brandt added another Panther goal just 11 minutes later, to put UNI up 2-0. Following an early second half goal, Northern Illinois would tie the game in the 77th minute. Facing potential overtime, the Panthers rallied in the final minute of regulation, as Brandt knocked the game winning goal in off a header by sophomore forward Sydney Hayden to secure the 3-2 victory.

Two days later, the purple and gold returned home to the Cedar Valley Soccer Complex in Waterloo to face the North Dakota Fighting Hawks (2-3-2) on Purple Mayhem Day. The Panthers attacked first and took the early lead in the 22nd minute with Brandt securing her fifth goal of the season with an assist from sophomore forward and midfielder player Jamie Althiser.

Unfortunately, that would be the only offense UNI could produce in the game. The Fighting Hawks came out of the halftime break aggressively to knot the game at one a piece and force overtime. While the Panthers were able to outshoot North Dakota in the two ten minute overtime periods three to one, neither team could get past the others goaltender, resulting in a 1-1 draw.

With the majority of the non-conference schedule behind them, UNI now turns its attention toward Missouri Valley Conference play, where they expect a strong challenge. Early on, their biggest challenge appears to be the Loyola-Chicago Ramblers (7-3-0), who sit only three spots behind the Panthers in the latest United Soccer Coaches Midwest Regional Poll at #15.

With a strong offense that has outscored their opponents 33-12, they will present a strong challenge to UNI when they meet in mid-October in Chicago.

Having given up the fewest goals among MVC teams so far this season (5) and netting the second most goals (17) behind Loyola, the Panthers look to make some serious noise among their MVC opponents. UNI will take the pitch this Saturday, September 23 to open up MVC play at home against the Illinois State Redbirds at 1:00pm. Fans can get autographs from their favorite players following the game. For those who cannot attend, it will be streamed on The Valley on ESPN3.