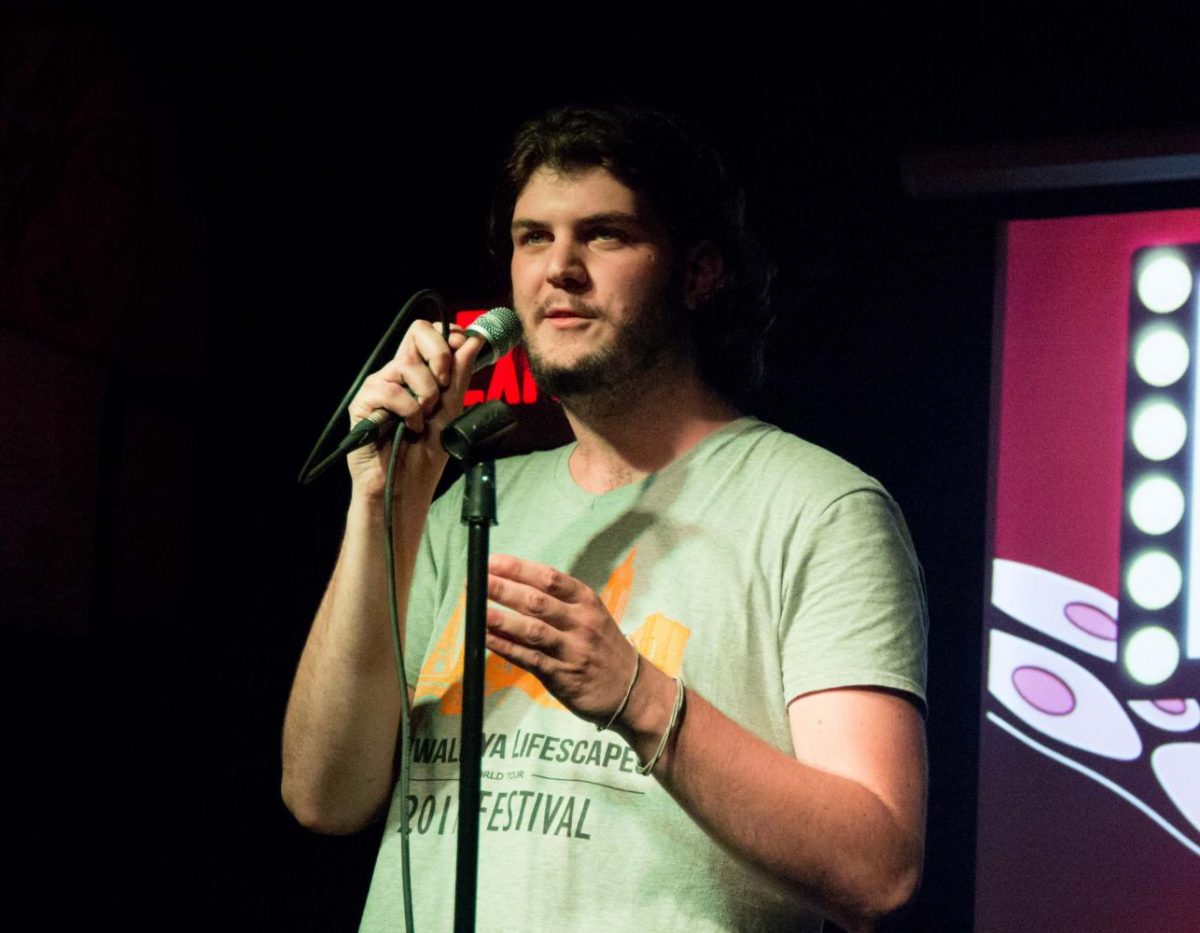 Senior jazz studies major Clayton Ryan was one of two UNI students who performed stand-up at Octopus Comedy Night this past Wednesday at the Octopus on College Hill.

Octopus Comedy Night was last Wednesday at the Octopus on College Hill. The night was filled with laughter, as community members came together to perform their best jokes for one another.

Some of the performers included UNI students, who are encouraged to participate.

Octopus Comedy Night takes place once a month. It is an open mic style evening where individuals can sign up to perform stand-up comedy in sets that last approximately five minutes.

“If we have spots available, you can show up the day of, and we will work you into the lineup,” Conyers said. “I’ve never turned anybody away. I just like to have things organized […] to let people know what order they are going to go in before the show. I think that eases tensions.”

Caleb Rea is a senior English major at UNI, and it was his first time performing at Comedy Night.

“It was a lot of fun,” Rea said. “I was kind of worried about how I’d feel when I got up there, but I actually felt completely at home when I got up on stage.”

Rea believes that students should take the chance and sign up to perform.

“I would recommend that other people try it if they have thought about doing stand-up comedy,” Rea said.

Clayton Ryan is a senior jazz studies major, and it was his second time performing at the Octopus.

“This is an awesome place, and people need to take advantage of it,” Ryan said. “What better place to test out comedy than a low-pressure situation like this? Worst thing happens, you don’t get laughs, and then you just change your material and try again, you know?”

“This was a great night — I mean, people need to laugh,” Conyers said.  “Right now, everything is so depressing, and you just need an opportunity to laugh. I think it’s important to get people in our community up on stage and hear what they have to think and relate with their humanity and find common ground.”

On Sept. 27 at 8 p.m., the Octopus will host its Comedy Showcase, which brings in national acts.

“The headliner is Stewert Huff, and he’s got credentials,” Conyers said. “It should be a really cool show.”

Huff is a comedian from Atlanta, Georgia, and he has performed on HBO, was a finalist in the Boston Comedy Festival and was awarded best comic at the 2016 Orlando Comedy Festival.

Donny Townsend, a comedian based in the Quad Cities, and Eric Persoon out of Iowa City will also be featured.