Who’s disrespecting who when athletes kneel? 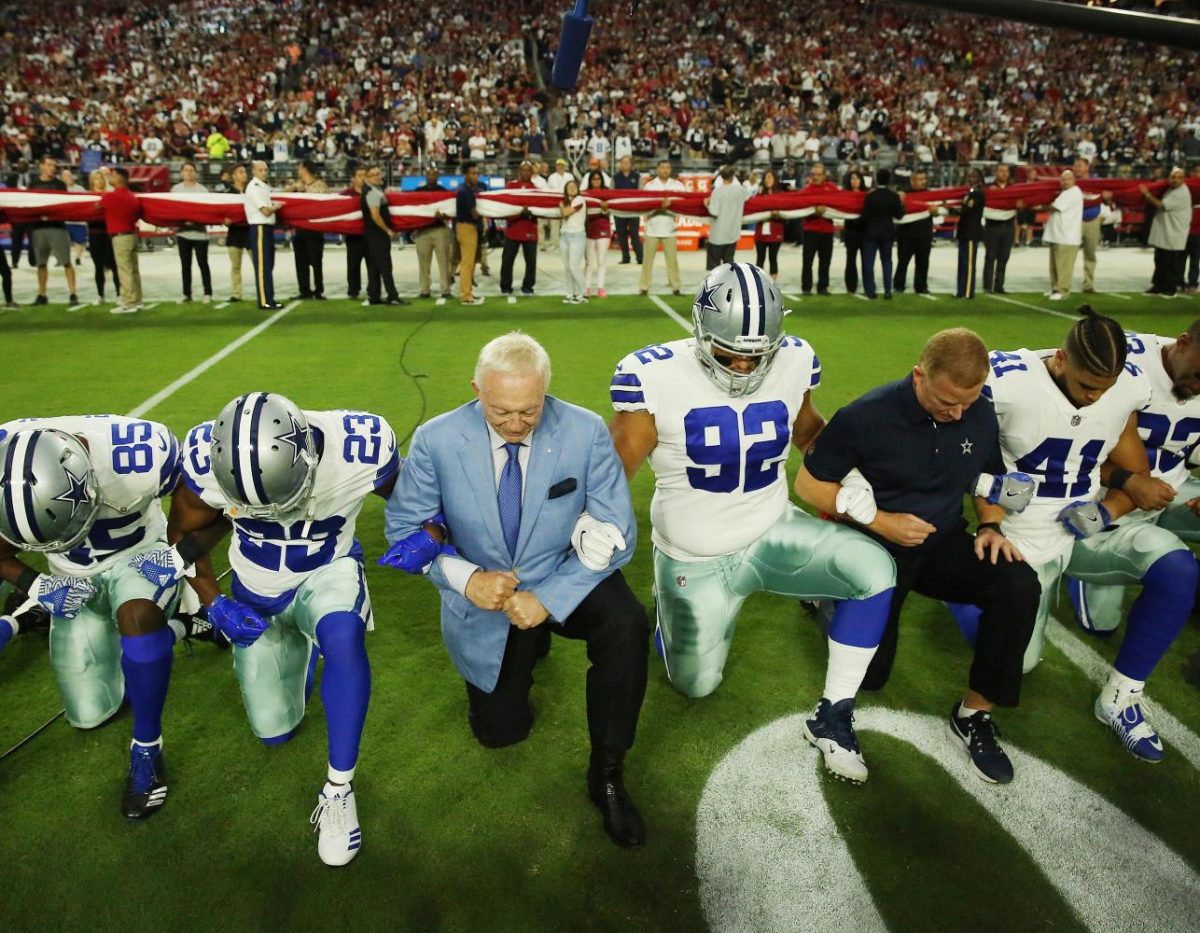 The Dallas Cowboy's took a knee during the national anthem before their game against the Arizona Cardinals.

So said President Donald Trump last Friday at a political rally in Alabama. Trump was discussing professional athletes sitting or kneeling during the national anthem.

A little over one year ago, 49ers quarterback Colin Kaepernick took a seat during the national anthem to protest racial injustice in the United States. Thirteen months later, his message carries on as NFL fans saw scores of players and coaches participate in similar style protests throughout week three.

While many players and coaches knelt or stood with arms interlocked on the sideline, the Pittsburgh Steelers, Tennessee Titans and Seattle Seahawks waited together in the locker room before taking the field.

The president’s comments didn’t just influence players in the National Football League. Oakland Athletics catcher Bruce Maxwell became the first MLB player to take a knee in protest. In the NBA, Trump rescinded his invitation to the NBA champion Golden State Warriors after guard Steph Curry announced he would not go to the White House if the team was invited.

Mixing politics with sports can be a difficult issue to examine. Is kneeling or sitting for the national anthem disrespectful, or is it a demonstration of the American people’s ability to exercise their freedom of speech and expression?

“It’s definitely within their right to do it,” said senior economics major Nick Meirick. “Nobody really intended for it to be offensive. Colin Kaepernick did it first, and he said he didn’t intend to offend soldiers and police officers or anything like that. He just wanted to bring attention to the topic of racial justice.”

While many support the issue being protested, some, like junior music education major Logan Mohr, an avid sports fan, feel it can be done differently.

“I think that freedom of speech is a thing, it’s a right for everybody,” Mohr said. “But I feel like there’s a different way to get the point they’re trying to get across.”

The first amendment of the U.S. Constitution states that “congress shall make no law…prohibiting the free exercise thereof…the right of the people peaceably to assemble, and to petition the government for a redress of grievances.”

Many who face the U.S. flag at sporting events choose to pay tribute and honor those who have fought and died protecting our nation. But at the same time, what may be forgotten is that they are also fighting for the rights guaranteed to all citizens of the U.S. In this case, it is the freedom to express oneself and the right to peacefully protest the issues that one feels the need to address.

As the weeks go on, protests are sure to continue. The NFL season has just begun, while baseball’s season is coming to a close. With the NBA and NHL seasons just around the corner, it will be interesting to see if Kaepernick’s movement will carry on into the winter.