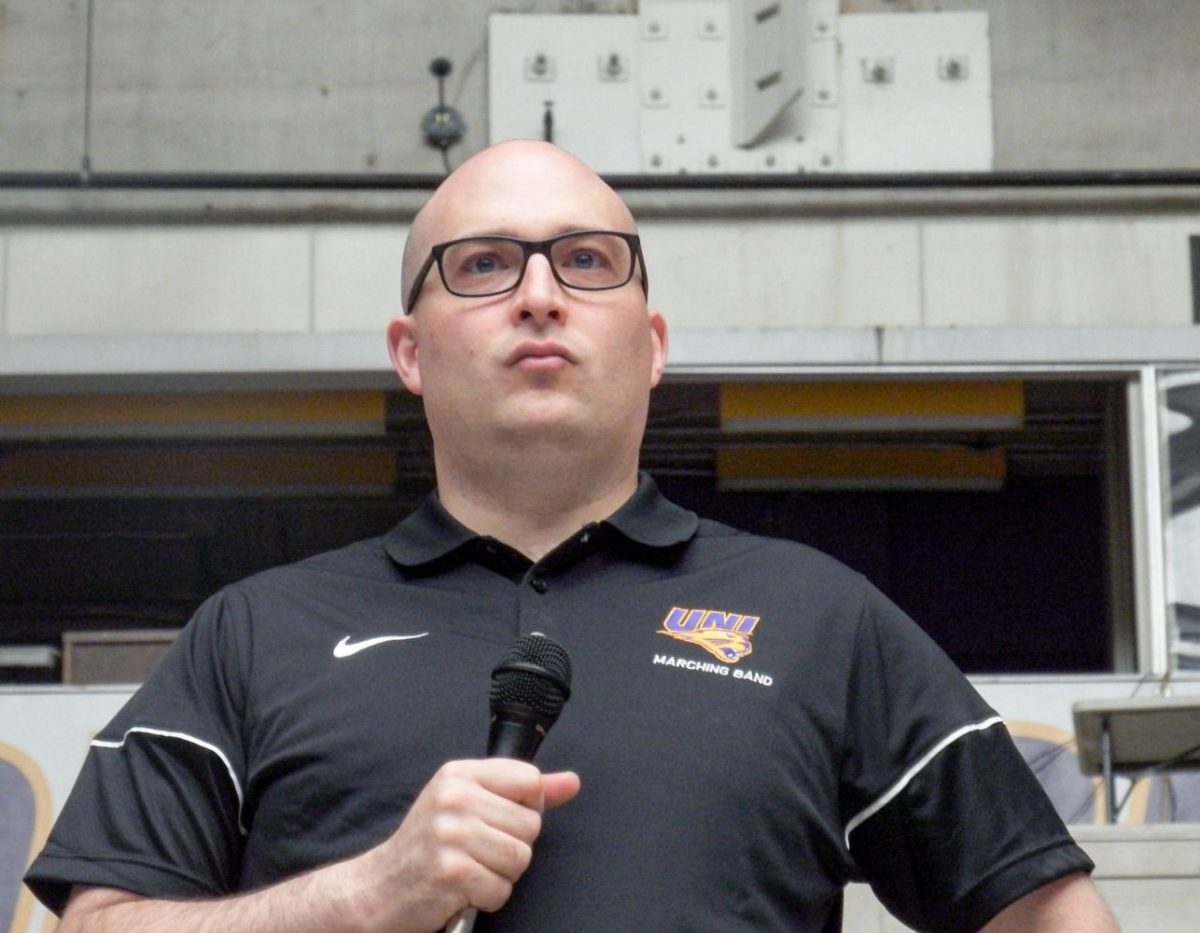 Panther Marching Band (PMB), the largest student organization on UNI’s campus at around 300 members, has recently undergone some changes this year with the addition of a brand-new marching band director.

The marching band director position was filled by Justin Mertz, who previously taught for 12 years at Syracuse University in Syracuse, New York as the director of athletic bands. He began working at UNI at the start of this academic year.

“I really love how the faculty has welcomed me [and] the students have welcomed me,” Mertz said. “It just feels really good being on campus, and my wife and I really like Cedar Falls. We’re really happy to be new Iowans here in Cedar Falls, and so far, the place and the Midwest lifestyle agrees with us.”

“I think the band is doing really well communicating and growing under new leadership,” Malcolm said. “I’m excited for what the band has in store moving forward. We’ve almost finished learning the Homecoming show, and we have a lot of exciting things ahead!”

The band was previously under the direction of Danny Galyen for 10 years. Galyen recently accepted a new position at UNI as the Director of Bands and oversees all of the bands in the School of Music. He is also now the conductor of the UNI Wind Ensemble, the top wind band at UNI.

“It is a little strange to not be doing the marching band after doing it for 10 years,” Galyen said. “But the nice thing about my new position is that I can still have a relationship with [the band], and I can still come to their rehearsals and travel with them even though I’m not the director.”

Galyen explained that the students knew that a new director would be coming over a year ago when they were told at marching band camp last fall.

Marching band camp is held during the week before classes begin and is an opportunity for the students in the program to begin learning the first show of the season and to get to know one another.

Galyen said he was pleased with how well both Mertz and the students handled the transition, saying that it couldn’t have been smoother.

“The nice thing is that Mr. Mertz wants to help them to keep all their traditions and to learn the way that they do things and help them to get to the next level,” Galyen said. “I think it’s going really well. It’s been a great experience for the students and for Mr. Mertz — both to be able to figure each other out and learn from each other and start to take the band on its next chapter.”

“Getting used to the different personality and work ethic from our new director during rehearsals is a change,” said Dan Benson, senior drum major. “I still find myself wanting to revert back to how things were last year […] It’s hard sometimes to not miss Dr. Galyen, but we couldn’t be happier to have Mr. Mertz here with us. And we know that the future of the Panther Marching Band is in good and more than capable hands.”

“As the season has been progressing, I think everyone is continuing to adjust to the change,” said Tia Heien, senior drum major studying music education. “But we are all working together to keep the culture and image that the Panther Marching Band is known for.”

Galyen added that he loves how much other students support the marching band.

“One of the great things about being the marching band director is you also kind of learn how phenomenal all of the other students are that are not in the marching band,” Galyen said. “On this campus, they’re very kind to the marching band. They stay in their seats at half time and watch them. It’s amazing.”

“PMB and the band program here at UNI is very, very strong, and that shows in not just how the groups perform, but the attitude of the students in it and the way they approach their work,” Mertz said. “They have a lot of fun; they work very hard. It’s a very positive atmosphere. It’s really pleasant. Sometimes I think we live in a cynical age, but it is very refreshing to be around those students […] This is a good university and I’m really glad to be here.”