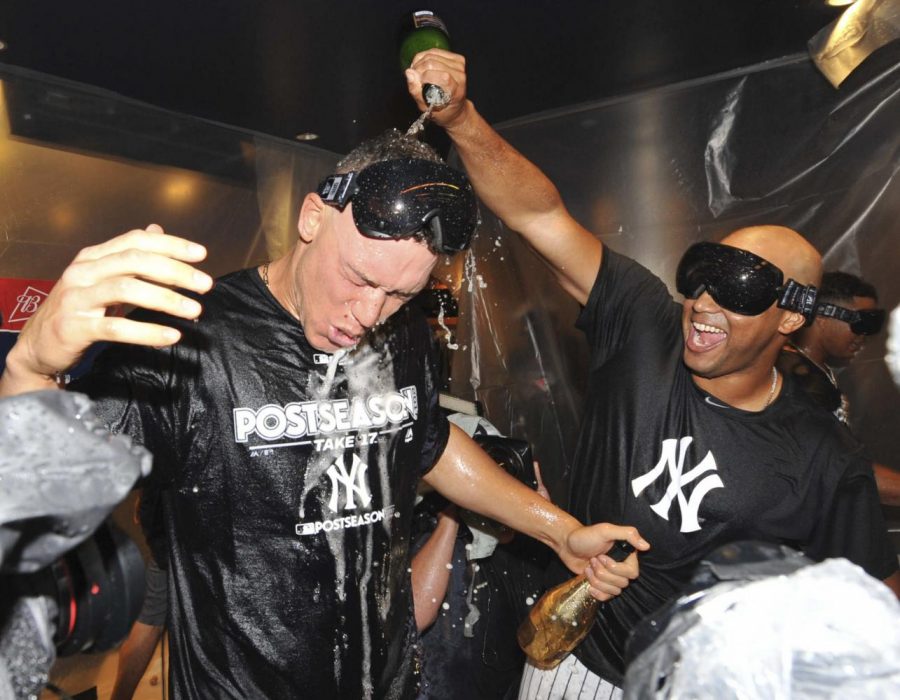 Aaron Judge (left) is doused by CC Sabathia (right) after an 8-4 American Wild Card win at Yankee Stadium against the Minnesota Twins.

Action kicked off last Tuesday with the Minnesota Twins facing off against the New York Yankees in the American League Wild Card Game. After falling into an early 3-0 deficit, the Yankees rebounded thanks to home runs by Didi Gregorius and Aaron Judge. The New York bullpen shut down the Twins as the “Bronx Bombers” took the one game playoff 8-4.

In the NL Wild Card Game the next night, the division rivals Colorado Rockies and Arizona Diamondbacks met in the deserts of Phoenix. The D-Backs quickly jumped out to a 6-0 lead after three innings.

Colorado, considered by many to be the best hitting team in the league, made a valiant effort, cutting the Arizona lead down to one, but failed to overcome the deep hitting ability of the D-Backs, falling 11-8.

The league division series began soon after on Thursday in the American League. The defending AL champion Cleveland Indians opened their best-of-five series with the Yankees on Thursday night. Trevor Bauer gave up only three hits as the Indians shut out the Yankees 4-0. Cleveland extended its series lead to 2-0 after an epic 13 inning marathon, winning 9-8 the next night.

In the other ALDS, the Boston Red Sox and Houston Astros also started their series with an 8-2 Astros rout, featuring three home runs by second baseman Jose Altuve. Boston met the same fate the next night in game two as Drew Pomeranz gave up twelve hits in another 8-2 loss.

Over in the National League, the Los Angeles Dodgers, holding the crown as the best regular season team of 2017 began their NLDS with NL Wild Card winner Arizona on Friday night. The heavily favored Dodgers got busy early posting four of their nine runs in the first inning in a 9-4 win for ace Clayton Kershaw.

Excellent defense the following night helped Los Angeles shut down the Arizona pitching core as the Dodgers took an 8-5 game to win on Saturday.

Meanwhile in the other NLDS, the Washington Nationals, looking to advance to the league championship for the first time since 1981 as the Montréal Expos, opened up postseason play against the reigning World Series champion Chicago Cubs on Friday in the nation’s capital. The Cubs managed to outlast the Nationals Stephen Strasburg, taking the lead in the sixth inning as they held on for a 3-0 win.

Washington responded with a 6-3 win in game two, backed by a strong hitting performance by third baseman Anthony Rendon. The series is now tied at one game apiece as it shifts to Wrigley Field in Chicago for games three and four.

The winners of the division series will advance to their respective league championship series for a best-of-seven matchup, with the victor advancing to the World Series. America’s pastime is now at its best time. Fans are on the edge of their seats for every pitch, hit and throw as their teams chase down a world championship. Some of the greatest moments in baseball are born in October postseason play. And this October shows no signs of disappointing.