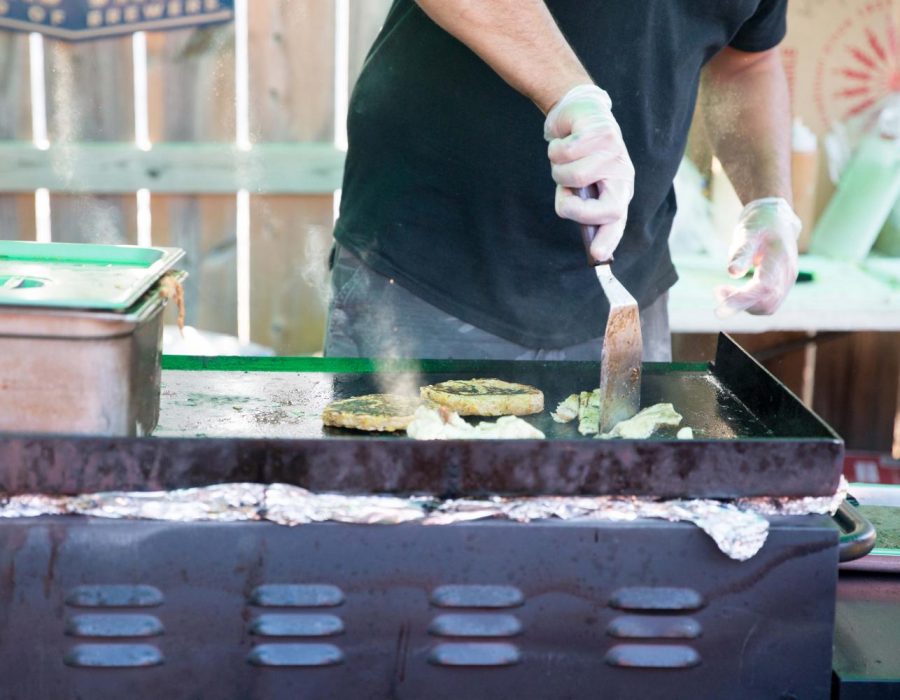 Redgie Blanco succeeded in bringing change to College Hill with the addition of La Calle Latin American Cuisine in April of 2014. Patrons of his restaurant were saddened when he made the decision to close it last November, but were ecstatic to find out that he would continue his business with pop-ups around town and a food truck.

“I worked in the service industry for a long time, and I always wanted to give it a shot to open a restaurant […] to bring some of the food my family used to eat,” Blanco said. “There was a lack of new flavors [and] things happening at the time in Cedar Falls, so I decided to take a risk and say, hey, why not?”

According to Blanco, he and his family decided to take that risk, and if it didn’t work out, they would close the restaurant and move on.

“I said, ‘Well, let’s bring this and see if we can change the way that people choose to eat a little bit,’” Blanco said.

Blanco decided that the restaurant would specialize in burgers that encompass many different flavors from Latin America. He used recipes that his family used for much of the inspiration for the menu.

La Calle was open on the Hill for almost three years and closed in November of 2016. The restaurant had become very successful and was growing quickly. Blanco said it got to a point where they would need to move to a new location in order to accommodate and fit the number of customers that were coming in at a given time.

“Staying [there] with the time I was putting in, it wasn’t worth it, because [of] the capacity,” Blanco said. “We couldn’t fit enough people here for lunch. On Thursday, Friday, Saturday, we were so busy for dinner that we couldn’t turn the tables fast enough. Instead of compromising the food or the service vision we had, I didn’t want to reduce that.”

After La Calle closed, Blanco tried to find an inexpensive, efficient way to continue his business. He eventually decided that a food truck would be the best way to go.

“The food truck was the good transition for me,” Blanco said. “It was a low-cost way that I could continue to carry the business, in a different way of course, in a different setting […] I noticed that they were becoming very popular, and it was something that would allow me to have the freedom of choosing what I wanted to do when I wanted to do it.”

Blanco also stressed the newfound mobility he’s enjoyed since transitioning from the storefront on the Hill.

“It’s a portable kitchen; I can go anywhere,” Blanco said.

Most of La Calle’s staff remained with the business while they made the transition, and they continue to work for Blanco today.

“I am super thankful that I’ve had the opportunity to work with Redgie because he’s a great guy,” said Enrique Tovar, a La Calle employee and UNI alumnus. “It’s wonderful — the impact that La Calle has on the community and how much people enjoy it.”

“I couldn’t be where I am without the staff that I have,” Blanco said. “Our staff makes the food even better because they allow us to be who we are.”

Being able to serve food at the Cedar Falls farmers market was one of Blanco’s biggest draws in getting a food truck. He works around three to four different events every week, as well as festivals. He explained that all of the work that goes into operating the food truck comes out to be a full-time job.

When he is not busy with La Calle, Blanco said he takes care of his kids and his wife and is a stay at home dad in the winter. He places great importance on spending time with his family.

Blanco plans to continue doing pop-ups and operating the food truck. He said he hopes that they can continue growing as a business and keep experimenting with new food and new ideas.

“We’re humble […] having the support,” Blanco said. “We’re very thankful [for] people being […] so supportive, and that they actually like the food! That’s the priority for us. Every time that we set up, it’s just mainly good comments and encouraging comments. It makes us want to do more. We wouldn’t have done it without our previous customers.”

La Calle plans to continue doing pop-ups until the end of October and will pick back up in the spring. Blanco has stated that there may be some pop-ups over the winter, but it has not been officially confirmed.