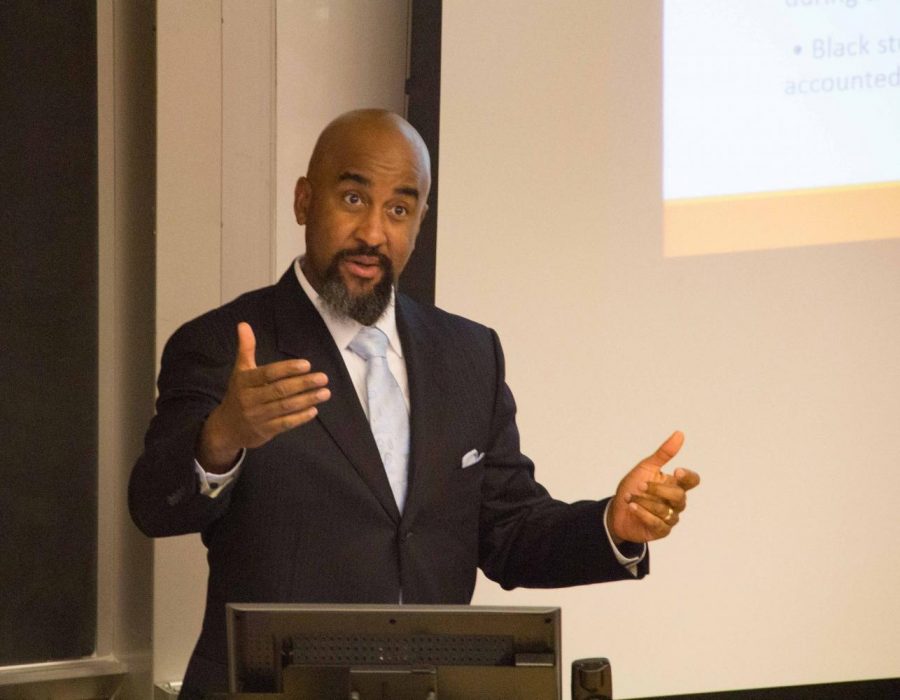 The lecture, attended by around 150 audience members, focused on a philosophical approach to the problem of racism in Iowa schools.

On Monday, Oct. 16, the Lantz Auditorium in McCollum Science Hall played host to acclaimed author and philosopher Derrick Darby, a visiting professor from the University of Michigan. Darby spoke to a crowd of over 150, discussing issues related to racism in the education system. He approached the matter from his area of expertise: philosophy.

“Philosophers like to spend a lot of time in the clouds and in the caves,” Darby said at one point in his talk. “But we have some real problems in the world.”

Darby, an accomplished author of three books, who was recently published in The New York Times and featured in a TEDx Talks conference in 2016, spoke on the topic of “Expelling Injustice from Iowa Schools.”

Jerome Soneson, head of the philosophy and world religions department, introduced the speaker by sharing a brief summary of Darby’s past work in the field of philosophy, reiterating Darby’s message of making ignorance an ally as a way to start attaining wisdom.

Darby began with a brief origin story of the University of Northern Iowa, which highlighted the significance the founders placed on providing a proper education for their students, who would go on to educate future generations of learners.

Darby also spent the first half of his talk calling attention to renowned philosophers and American thinkers who, despite their contributions to academia, held highly negative and erroneous views towards socially constructed race — in particular, the black race.

“Everything is not about black and white,” Darby said. “True, though much is about race.”

Arguing that the issues at hand involve gray areas, Darby said they are, in fact, about the social inequality between blacks and whites. Additionally, he said disparities regarding disabilities, ethnicities and economic inequities matter just as much as race.

Noting that there is “room for a lot more discussion,” Darby said he chose to focus his presentation on black students.

Speaking directly to students of philosophy and education majors, Darby stressed that even leading scholars can fall victim to false impressions of race and stereotypes.

Yet, his message did not stop with these antiquated notions of racial inferiority — what Darby himself referred to as “old poison.”

He also shared snippets from historical figures including Frederick Douglass and Anna Julia Cooper, an accomplished African American author from the 19th century.

As opposed to the claims of Thomas Jefferson and Immanuel Kant that, according to Darby, were racist in nature, the works of both Douglass and Cooper emphasized not only black heritage, but also the necessity to remember the past.

In response to their writing, Darby said, “History is a powerful thing, isn’t it?”

He later added, “This isn’t ancient history,” urging listeners to reevaluate the presence of the past in today’s society.

Darby ended his lecture by stressing the importance of “invest[ing] in transformative school leaders that want equitable school education.”

With educators from the Waterloo school district in the audience, Darby discussed the action that teachers must take, such as undergoing training and even holding their administrators and leadership “accountable for closing some of the disparities [within the schools].”

In addition to presenting arguments involving history, statistics and contemporary issues within American schools, Darby appealed to core American values, saying, “None of us need to be superheroes to have a decent shot at living the American Dream.”

After his presentation, Darby participated in a Q&A session, in which he responded to some audience members’ specific concerns of racial injustice in Iowa schools.

“Practice what we preach — freedom, equality and dignity for all,” Darby said during the Q&A.

Ana Davis, a junior philosophy and psychology double major, was one of the many students in attendance at the lecture. Davis said Darby made her recognize the role she has in working towards a more racially tolerant society.

“We have a disconnect with our history,” Davis said. “Our efforts to become ‘color blind’ have caused us to ignore an essential element of our individuality and humanity.”

Focusing primarily on the injustices of racism that young students across the nation and in Iowa schools encounter, Davis said Darby was able to connect with the audience by directly relating the issue to places they were familiar with, such as Waterloo.

“Dr. Darby emphasized the fact that he cares enough about the injustice of Iowa schools to do his research and bring light to specific issues we currently face,” Davis said.

Darby’s visit to UNI was made possible by the Hearst Lecture Series, which aims to  provide students and faculty with the opportunity to engage with scholars from across the country.

The previous guest speaker brought to campus by the department of philosophy and world religions, and the first of the Hearst Series of the semester, was Professor Winnifred Sullivan, who spoke on matters relating to juries and death row.

The next lecture to be offered by the department will be held on Nov. 2 by Professor Laura Nasrallah of Harvard Divinity School.