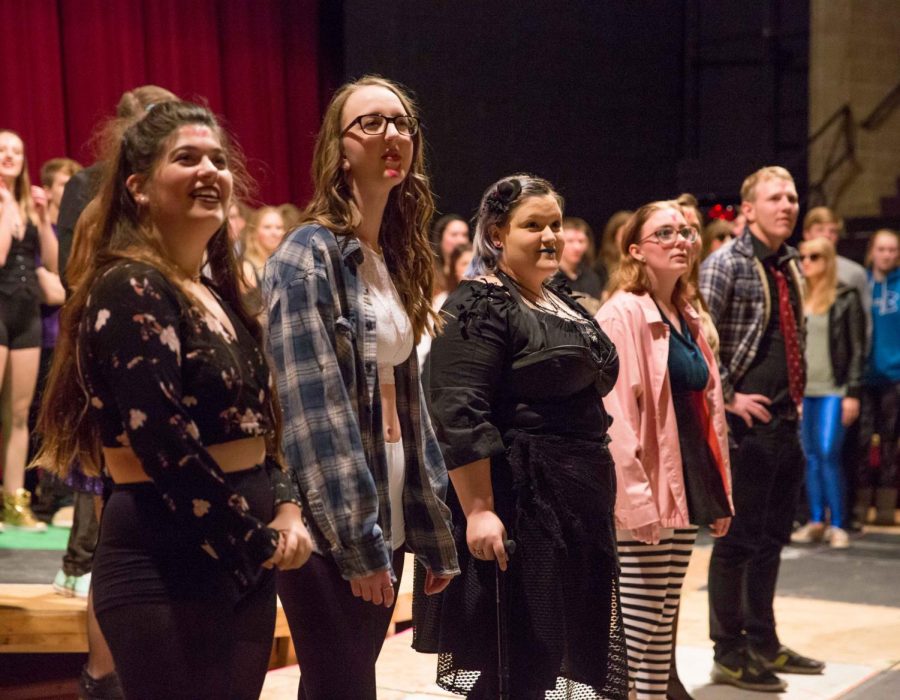 The UNI chapter of Alpha Psi Omega hosted their annual showing of “The Rocky Horror Picture Show” on Friday, Nov. 3, at 11 p.m. Admission was free for UNI students with an ID.

Otherwise, attendees could give either $1 or a canned food item donation, which went to benefit the Northeast Iowa Food Bank in Waterloo, according to the event Facebook page.

Many attendees dressed up in costumes related to the 1975 movie and even imitated various characters, such as Rocky and Dr. Frank N. Furter, among others.

As students entered the event, they were asked whether or not they had attended a screening of the movie before, and newcomers were marked with a red lipstick letter “V” for “virgin” somewhere on their faces. This was followed by a “virgin auction,” in which the students were called up on stage and auctioned off for the most obscene price.

In “Rocky Horror” traditon, there were prop bags for sale for $4. The props include kazoos, newspapers, rubber gloves and other items related to the viewing of the film. When the corresponding scene appeared in the movie,  students used their props to act alongside the movie.

For example, during the rain scene at the beginning of the film, students were to cover their heads with newspapers along with the characters on screen.

David Harnois, an unclassified staff member in the theater department and a UNI alumnus, hosted the event for the 10th time this year.

The event has moved locations many times, from the Gallagher Bluedorn to Lang Hall and now to Strayer-Wood Theatre this year.