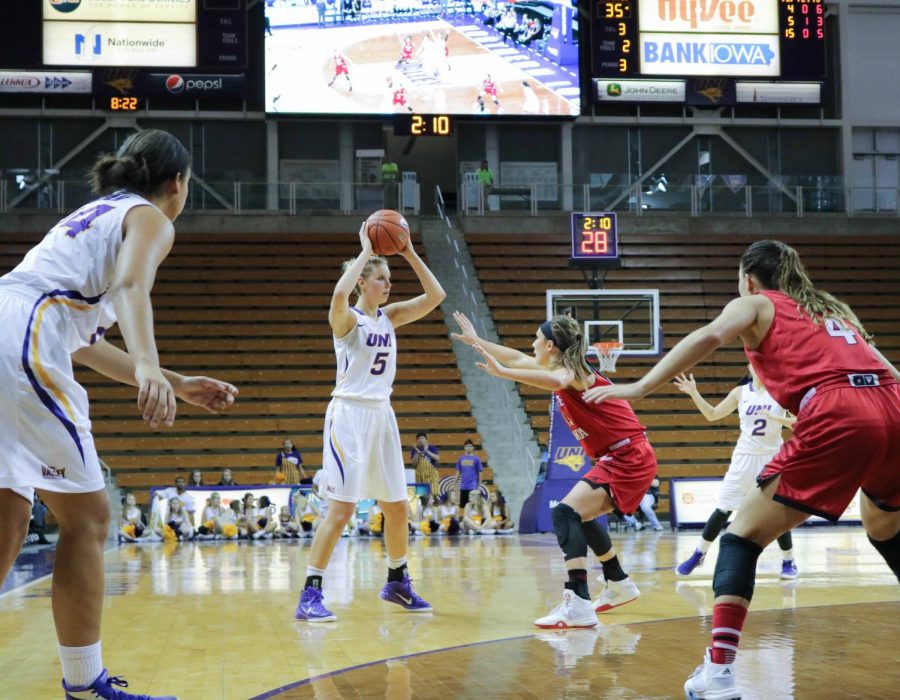 College basketball season is here once again, and the UNI women’s team is ready to make some noise. The Panthers opened up play for the 2017-2018 season with a convincing 80-53 exhibition win over the University of Sioux Falls Cougars. Junior Mikaela Morgan led the way with 18 points, while the freshman duo of Karli Rucker and Nicole Kroeger made their collegiate debut with 15 and 14 points, respectively.

Coming into the new season, UNI has much to prove following their successful campaign a year ago. After finishing with a record of 24-9 (15-3 in Missouri Valley Conference play), the Panthers finished second in the conference and fell just short of winning the MVC tournament title last March.

Despite the crushing loss, the purple and gold received their first ever at-large bid to the NCAA Tournament, their third appearance in the big dance in school history. UNI fell to the DePaul University Blue Demons in the first round.

Coming into the new year, the Panthers have been picked to finish third in the league behind the defending conference champion Drake Bulldogs and Missouri State Lady Bears in this year’s MVC preseason poll.

In order to run the table and make another run at the MVC championship, UNI must fill some key holes. The Panthers lost three key pieces of its offense with the graduation of Madison Weekly, Hannah Schonhardt and Angie Davison.

With the development of strong youthful players over the years, however, these women will get their chance to lead their squad to victory. Sophomore guard Mikaela Morgan stepped up in her freshman season to help become a cornerstone of the Panthers defense. Another strong two-way player on the court will be sophomore forward Megan Maahs, who shot 42.8 percent from the field, as well as serving as another strong defensive piece with Morgan.

Redshirt junior Ellie Howell, who was selected as the lone Panther to the MVC preseason all-conference team, is expected to be the heart of the offense. Averaging 12.2 points per game a year ago, expect Howell’s shooting game to improve even further after a stellar season last year.

The purple and gold have also added a new legion of youth to their bench with the addition of five new freshmen, many of whom have been standout stars during their high school playing days.

The Panthers will open the regular season tomorrow night at home against the IUPUI Jaguars before hosting in-state rival Iowa State the following Tuesday.

After a two-game tournament down in central Florida over the Thanksgiving weekend, UNI will return home on Dec. 10. after a five-game road trip to host the University of Wisconsin-Parkside Rangers and the Iowa Hawkeyes on Dec. 17.

Missouri Valley Conference play will begin on Dec. 29. with the Loyola-Chicago Ramblers coming to the McLeod Center. This will lead up to the MVC Tournament at the iWireless Center in Moline, Illinois from Mar. 8 to 11.