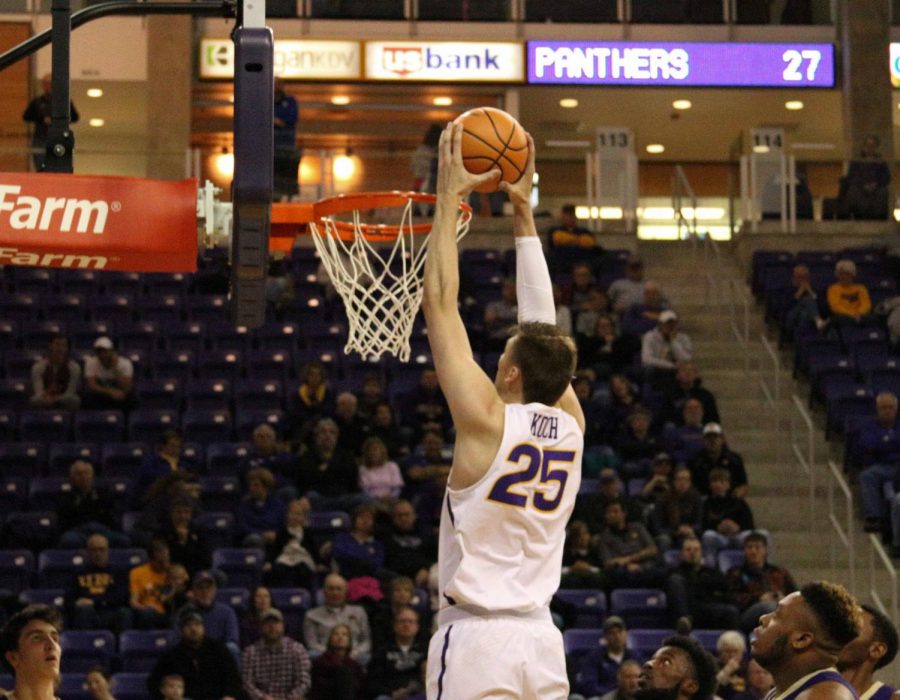 Bennett Koch (25) gets up and throws it down uncontested as the defense just watches.

The UNI men’s basketball team won their first home game of the season against Alcorn State after a final score of 73-45. Everything came together well for the Panthers after a big first win of the season. UNI led the majority of the game after leading by double digits to begin the game.

The Panthers relied heavily on Tywon Pickford and Bennett Koch throughout the game. Both players had a great first half, with Koch scoring eight points and one free throw in the first. Pickford scored seven points and recorded one assist.

Spencer Haldeman had a perfect first half off the bench, going 3-3 from field goal range, including one three-pointer. The Panthers shot 46 percent from the field and held a 10 point lead over the Braves, going into intermission 37-27.

After halftime, Juwan McCloud would take over on offense and scored 12 points in his 16 minutes of play in the second half.

Pickford scored nine points in the second half of play, leaving him with 16 points and 11 rebounds.

Koch added four to his total, leaving him with 11 points and 13 rebounds at the end of contest.

The Panthers went 15-27 from the three point range in a big improvement from last game.

The Panthers look ahead to face Wartburg at home on Nov. 15.