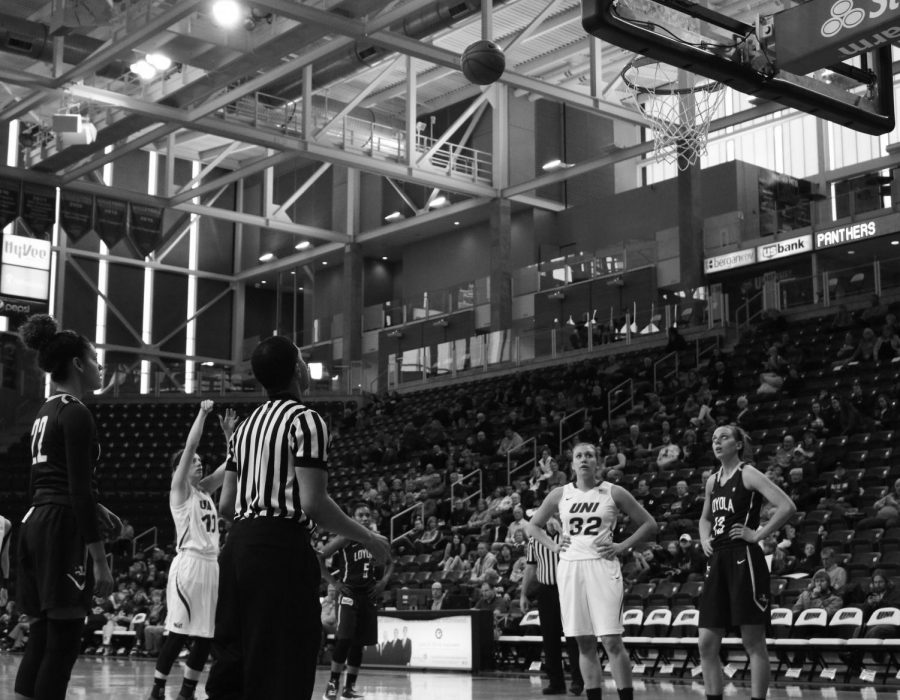 While most UNI students spent their winter break with family and friends trying to avoid the frigid cold weather, the UNI women’s basketball team took to the hardwood for six games over the three-week break from classes.

This stretch started on Dec. 17 as the Panthers hosted the 25th ranked Iowa Hawkeyes at the McLeod Center. In this marquee in-state matchup, sophomore Megan Maahs and senior Kennedy Kirkpatrick both put 12 points on the scoreboard and helped lead the way for the purple and gold offensively. However, after trailing by only four points at halftime, the Hawkeyes dominated the second half, outscoring the Panthers by 20 to hand UNI a 47-71 loss. Four days later, the Panthers took to the road to play the Kansas State Wildcats. This game was highly anticipated, as last season the Panthers defeated the then 24th ranked Wildcats at home in one of the biggest upsets of the year. In a back and forth battle with the Big XII foe, Kirkpatrick and junior Mikaela Morgan combined to score 42 points. On the final possession in the closing seconds of regulation, Kansas State missed two critical free throws that could have either tied or won the game, and UNI escaped Manhattan, Kansas with a 72-71 victory.

To close out 2017, the Panthers would open up Missouri Valley Conference play on Dec. 29 against the Loyola-Chicago Ramblers at home. From every aspect of the game, the purple and gold dominated. Morgan and freshman Nicole Kroger tallied 18 and 11 points, respectively, and used an explosive second quarter to win their fourth straight MVC opener in a 70-41 blowout. In a New Year’s Eve afternoon game, UNI faced off against the newest member of the conference, the Valparaiso Crusaders, for the first time ever. In another solid game, four Panthers (Howell, Morgan, Maahs and Kroeger) posted double digit numbers in scoring, and Kroger sank four three point shots from beyond the arc to put Valpo on ice, taking a 77-56 win.

As the new year began, UNI would have to face two challenging MVC squads, both on the road. On Jan. 5 at Southern Illinois, finding the basket became difficult. The Panthers only made one three-point shot out of 19 attempts and were held to 28 percent shooting from the field during the second half. Despite the lack of shooting efficiency, the game went to overtime. However, shooting struggles carried over into the extra five minutes, and the Salukis outscored UNI 11-4 to hand the Panthers a 53-60 loss. To close out the holiday break, UNI traveled to Springfield, Missouri to face off against the MVC’s perennial power program, the Missouri State Lady Bears. While shooting did slightly improve from the previous game, the Panthers struggled greatly with ball control as they gave up 22 turnovers, leading to 24 points by the Lady Bears. Despite a hard fought third quarter by UNI, Missouri State prevailed in a hotly contested final period to give the Panthers their second straight loss, 52-62.

With the spring semester now in swing, the purple and gold still have 14 games remaining on the schedule before the MVC tournament in March. With a record of 6-9 overall and 2-2 in conference play, the Panthers sit square in the middle of the conference standings in fifth place. A series of strong performance games over the next nine weeks can definitely put UNI back into contention for a conference title in March. Fans can catch the Panthers tomorrow night as UNI hosts the Evansville Purple Aces at 7:00 p.m. at the McLeod Center.