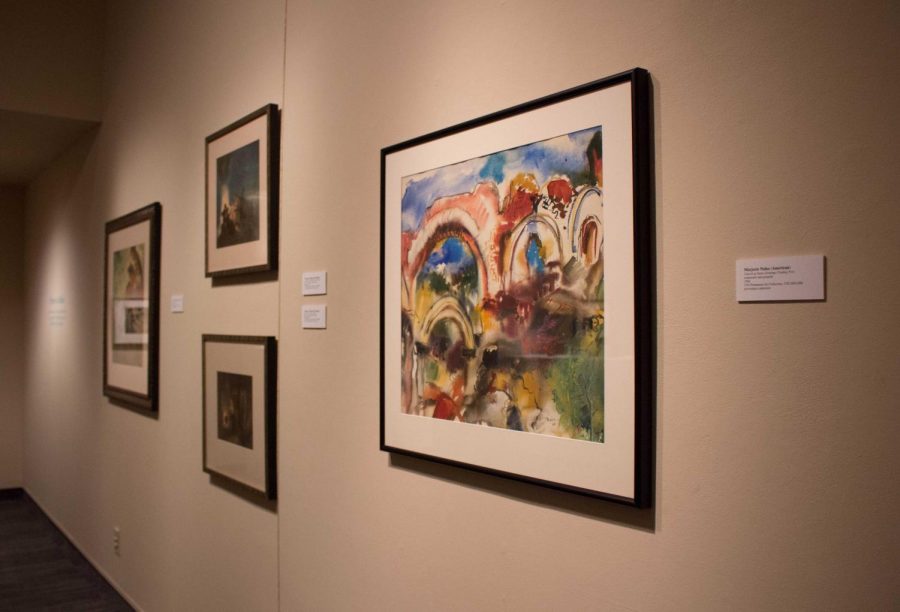 The "Women as Makers" exhibit in the UNI Gallery of Art showcases a variety of artwork, including paintings, pottery and textiles, created by women.

The UNI Gallery of Art is currently presenting “Women as Makers,” an exhibition with the intention of shedding light on women artists in the gallery’s permanent collection. The exhibition was co-curated by art history professor Elizabeth Sutton and gallery director Darrell Taylor.

Along with artwork from the permanent collection, the exhibition contains some borrowed objects from the UNI Museum.

The UNI Gallery of Art’s permanent collection features around 4,000 art objects, ranging from the 16th century to the present day. This exhibition in particular features artwork dating from 1850 until the mid 2000s, and some that has never been seen by the public.

According to Taylor, some of the artists in the show are well-known printmakers, such as Elisabeth Frink and Käthe Kollwitz, as well as Marjorie Nuhn, a protégé of Grant Wood.

“The idea came from lots of places, but mostly from my frustration with the continued misogyny — often unrecognized and unacknowledged — in contemporary U.S. society,” Sutton said. “I have long had frustration with the exclusion and subordination of women artists and art in the ‘traditional’ art history canon.”

Sutton and Taylor began curating the exhibition last semester, which involved pulling artwork from the collection and thinking about how they fit with the overall theme, which can become a lengthy process.

“We gravitated toward objects that are made by women specifically,” Taylor said. “And where we couldn’t find enough objects to meet this topic well, we pulled on some images not made by women, but depicting women doing work.”

One of the works in the show that stands out to Taylor is by Kollwitz, who was a German-born artist. The image is of a woman and her child in the throes of death.

“I put it all by itself so that people can have a moment and look at it and not feel like eyes are on them,” Taylor explained. “It has a place where you can feel safe to look at it. There is nothing untoward about it, but the more you look at it, the more you realize the situation that these two people are in. It gives you an opportunity to stand in front of the artwork and have a moment.”

The exhibition begins with a woodcut print by Clara Skinner titled “Industry,” which depicts three women making art alongside one another.

“I’m particularly attached to the Hardanger doily and collar [from UNI’s Museum] because my current research is on Norwegian American immigrant women in Iowa finding ways to connect to their heritage through embroidery and crochet and to the natural world the motifs used in it,” Sutton said. “I also really like the flour sack quilt because of its historical presencing and the frugality-plus-aesthetic genius of it.”

Taylor said that he hopes the exhibition inspires viewers to reconsider the impact women have made in art.

“People from my generation and the younger generation are looking for ways to integrate women into art practice and art exhibition practice in a better way,” Taylor said. “It is well past time to change the public’s perception of women in art.”

“I hope people stop and look and think about the contributions of women in their lives,” Sutton said. “I hope they wonder why we don’t see more women as agents, rather than as objects, in contemporary visual culture […] It continues to frustrate me that we all must still fight for what my mother fought for.”

The UNI Gallery of Art is free and open to the public. It will be closed on Monday, Jan. 15, for Martin Luther King Jr. Day.