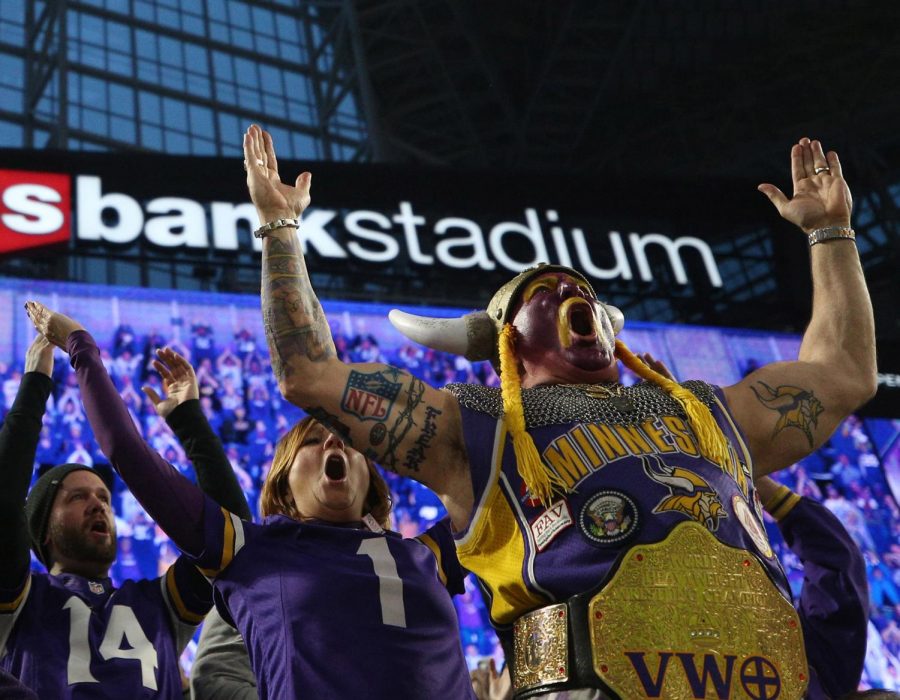 Those were the words of Minnesota Vikings’ Radio Network broadcaster, Paul Allen, last Sunday as he called Case Keenum’s 61-yard game-winning touchdown pass to wide receiver Stefon Diggs. As time expired, the Vikings earned a 29-24 win over the New Orleans Saints in the NFC Divisional Playoffs.

An unbelievable last second walk off touchdown now puts Minnesota into Sunday night’s NFC Championship Game against the Philadelphia Eagles, with the winner playing the AFC champion in Super Bowl LII on Feb. 4.

Coming into this game, the 13-3, second seeded Vikings looked to start their playoff run after receiving a first round bye.

Vikings fans have been eager all season to make a deep run into the postseason and make it to their first Super Bowl in 41 years. In addition, they look to re-write the term “home field advantage” by attempting to become the first team in NFL history to play a Super Bowl in their home stadium (even though the NFC champion is deemed the ‘visiting team’ this year).

As for the Saints, they came into the Twin Cities after a 31-26 win over their division rivals in Carolina during the Wild Card Playoff, looking to make it to their first Super Bowl since winning the Lombardi Trophy in 2009.

Minnesota was on the board early, after a 14 yard touchdown run by Jerick McKinnon, a 20 yard field goal by Kai Forbath and a late first quarter interception by Saints quarterback Drew Brees. Minnesota was leading comfortably 10-0 after the first 15 minutes. Brees’ interception was costly as the Vikings cashed in with a one yard touchdown run by Latavius Murray to extend the lead to 17-0 into halftime.

The Saints, with the second highest ranking offense in the league, wouldn’t let a 17 point deficit scare them. On their first possession of the second half, New Orleans marched 80 yards to the end zone with a touchdown pass from Brees to Michael Thomas.

Keenum, facing pressure the next drive, threw a back legged interception, putting the Saints in position for another touchdown from Thomas, cutting the Viking lead down to three.

Minnesota responded with a 49 yard field goal by Forbath to go up by six with just over 10 minutes left in regulation. A few minutes later, Vikings punter Ryan Quigley’s punt was blocked, setting the Saints up for the go ahead touchdown from Brees to Alvin Kamara.

Trailing by one, Minnesota raced down the field in 90 seconds to allow Forbath to kick the go ahead 53-yard field goal, making it 23-21, Vikings. With 1:29 remaining, Brees and the Saints rolled over the Vikings’ top ranked defense to get in range for a 43-yard field goal by Will Lutz, making the score 24-23 Saints.

With 25 seconds left on the clock, Keenum threw one completion to the Vikings’ 39-yard line. On third down and 10, the undrafted gunslinger from Houston dropped back into the pocket, stepped forward and heaved the ball toward Diggs at the New Orleans 34-yard line.

Completing the catch and avoiding Saints rookie safety Marcus Williams, who misjudged the tackle, Diggs planted his feet, regained his balance and sprinted to the end zone for the miraculous game winning score that sent fans at U.S. Bank Stadium into a state of pure pandemonium.

After years of frustration and heartbreak, the Vikings received a long overdue miracle in this win.

While they will still have to play in Philadelphia for the right to go to the Super Bowl, the heartbreaking moments, such as the missed field goal in the 1998 NFC title game, the overtime loss to the Saints in the 2009 title game and the 2015 wide left field goal  against Seattle, that have haunted the franchise for years now seem like distant memories.

The Vikings and Eagles will kick off the battle for the George Halas Trophy in the NFC Championship Game on Sunday at 5:40 p.m. on FOX, following the AFC Championship Game between the defending champion New England Patriots and upstart Jacksonville Jaguars at 2:05 p.m. on CBS.