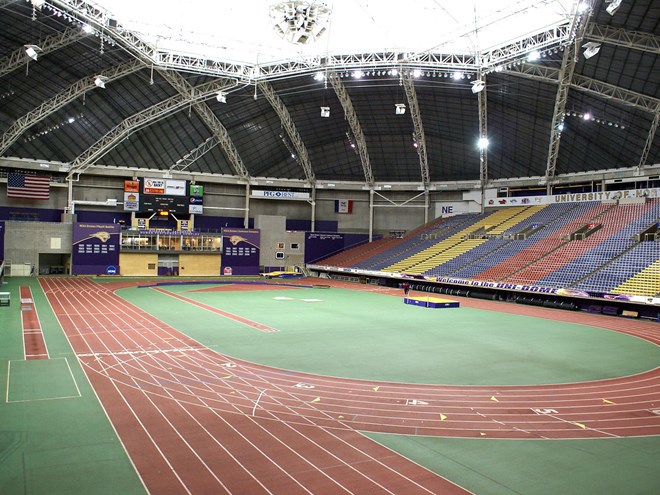 When most think of the UNI-Dome, they think of  Panther football. But during the winter, it’s home for the scores of athletes on UNI’s track and field teams. The purple and gold travel to Madison, Wisconsin for the Wisconsin Invite for their final meet before hosting the Missouri Valley Conference Indoor Track and Field Championships in the UNI-Dome.

Both men’s and women’s teams have posted strong results in their first several indoor meets this season. In the season opener at Iowa State for the Cyclone Duals, the Panthers ran, threw, and jumped very well and held off both the Cyclones and  Drake Bulldogs. In their first home meet at the Panther Open, both teams combined to win 23 of the 30 events in a rout of their opposition. At the SDSU Indoor Classic, hosted by the South Dakota State Jackrabbits, both teams finished strong in the standings with the women finishing seventh, and the men third.

To this point in the season, each meet has been an opportunity for athletes to improve further on their season-long goal of success in the conference championships. And their results are showing.

Freshman Isaiah Trousil leads the men’s team in the 60 meter dash with a time of 6.91, while senior Jordan Pingel commands the mid-distance 600 and 800 meter runs. In the field, sophomore Xavier Williams has leaped to a team best 6’ 10.5” mark in the high jump, as junior Keegan Trittle has heaved the shot put just over 57 feet past the mark.

On the women’s side, senior Maddie Irmen leads the Panthers in the 400 meter, clocking in a time of 57.56, while sophomore Hannah Truniger dominates the highly demanding 3000 meter race, finishing in just under 10 minutes.

Out in the field, junior Katie Cross has made her mark in the long jump, leaping for a 17’ 4” jump, as her senior teammate Kassidy Sharp jumps a team best 36’ in the highly challenging triple jump.

Coming into this season’s MVC championships, both teams are eager to bring their strong performances of the indoor season to the floor of the UNI-Dome. Last season the men finished in third place, 45 points behind champion Wichita State, while the women finished in the middle of the pack in fifth.

Panther fans can come cheer on the purple and gold starting next Saturday, Feb. 24, in the UNI-Dome. The heptathlon will begin at 9:30 a.m. followed by field events at 2 p.m. and finally with races on the track at 3 p.m.