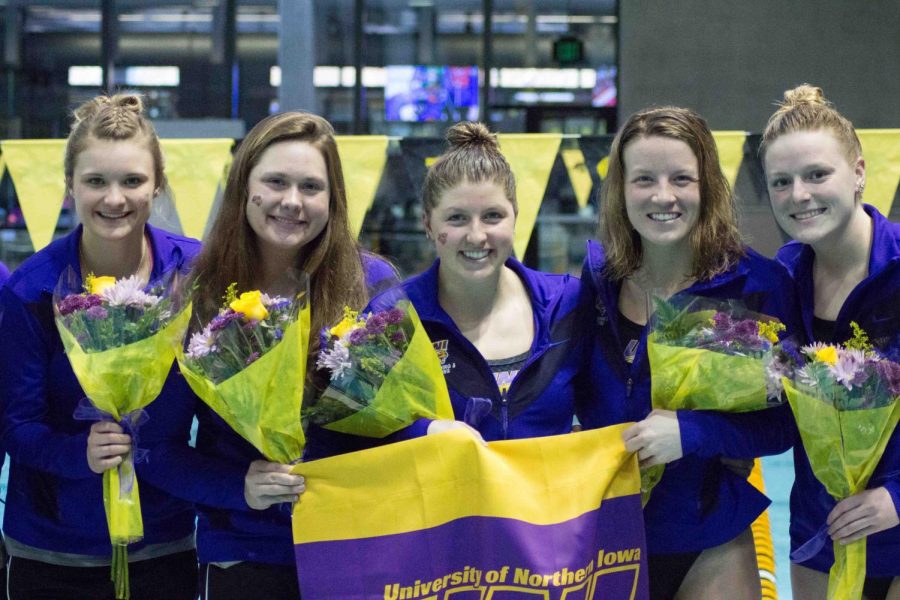 Hawkeye Nation was invaded by an army of purple and gold Panther fans this past week, as UNI played host to the Missouri Valley Conference (MVC) Swimming and Diving Championships at the Campus Recreation and Wellness Center in downtown Iowa City.

In his first season as head coach of the Panthers, Nick Lakin has trained a program dedicated to excellence.

“I think the first thing I’d take away from coaching this year is the character of athletes that we have at UNI who are incredible,” said Lakin after Saturday’s final heats.

For the third straight season, the Panthers clinched third place out of eight teams, behind champion Missouri State and Southern Illinois, and just 10 and half points ahead of Indiana State.

The purple and gold got Wednesday’s meet started with two strong podium finishes in the two opening relays. The 200 Medley Relay team of Katie Taylor, Moriah Ross, Crystal Florman and Molly Lembezeder took second place,  timing in at 1:41.18, while the 800 Free Relay of Taylor, Kylie Engstrom, Jordan McCullough and Rachel Sibenaller finished third at 7:27.78. After the first night, UNI sat in a tie for second place with 64 points.

Thursday night’s finals brought the Panthers five top five finishes, including Katie Taylor’s defense of her conference crown in the 200m individual medley, as well as Crystal Florman and Molly Lembezeder finishing second and tied for third, respectively, in the 50 free. Florman, who has led the Panthers’ sprint core all season long, also earned an NCAA B Cut with her finals time.

Kylie Engstrom took fifth in the 500 free, clocking in with a 4:57.56 time, while the 200 free relay of Florman, Abby Meyer, Sibenaller and Lembezeder took second on the podium behind Missouri State, who broke the MVC record set by the Panthers a year ago. Jayden Lovell led the path in diving in the one meter springboard, winning the consolation final and finishing ninth overall.

Taylor resumed her dominance of the individual medley on Friday as she won her second straight conference title in the 400 individual medley (IM), achieving a NCAA B Cut and breaking her own MVC record. Florman also defended her conference crown in the 100 fly, clocking in a 54.50 to top the podium.

Molly Lembezeder came within just over a second of winning the 200 free, but settled for third with a time of 1:49.71. To close out Friday, Taylor, Ross, Florman and Lembezeder capped the night off with a second place finish in the 400 medley relay.

As the meet transitioned to its final day, the Panthers kept the pressure on the competition. In one of the most physically demanding events of the sport, Kylie Engstrom fought tooth and nail to finish third in the 1650 free and set the UNI school record by 16:54.34 seconds.

“It’s rough everytime you swim it,” she said following her record-breaking swim. “As a distance group we try to make it through with positive thoughts and we try to cheer each other up during those tough sets so we can get to this point in the season where we just kill it in the mile.”

Lembezeder and Florman finished 2-3 in the 100 free, both within less than a quarter of a second of each other. Moriah Ross clinched the sixth spot in the 200 breast swimming a 2:17.92, while freshman Jayden Lovell led the UNI divers throughout the three meter springboard competition, finishing sixth.

With the season now behind them, Coach Lakin praised his team for a resounding championship meet.

“Any time you have a four day meet, things aren’t going to go your way the whole time, so we just had to get up and be resilient and keep walking into every session, ready to go,” Lakin said.