TheatreUNI lets the sunshine in with ‘Hair’ 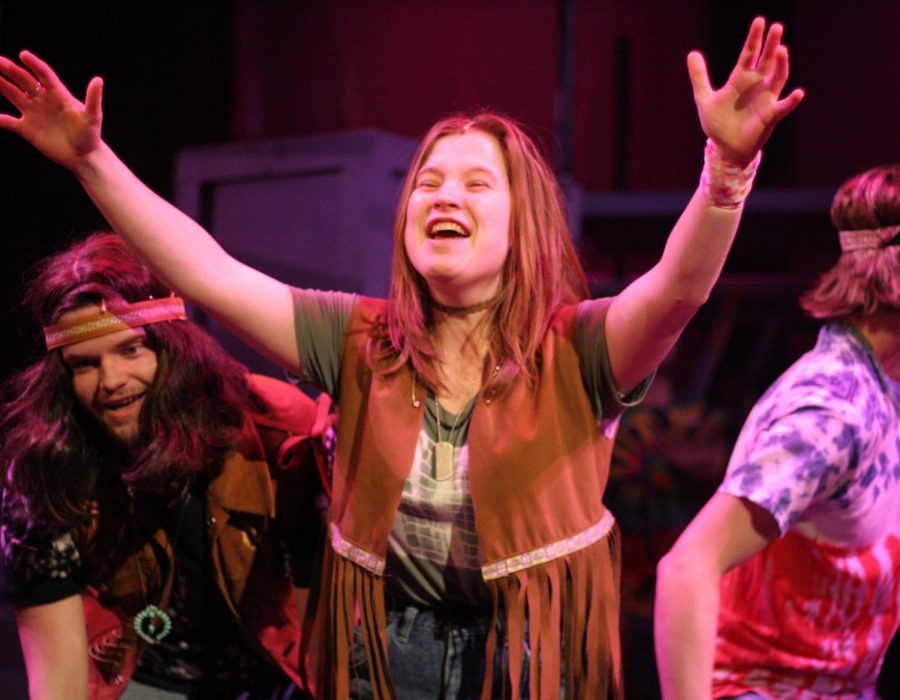 TheatreUNI had its last performance of "Hair" this past weekend. "Hair" first premiered on Broadway in 1968.

This past weekend, TheatreUNI wrapped up their two-week long production of the acclaimed Broadway musical “Hair” at Strayer-Wood Theatre.

“Hair” first premiered on Broadway in 1968 50 years later its thematic ties to race, pacifism, religion and freedom feel more relevant than ever.

This production of “Hair” was directed by Amy Osatinski, a new faculty member in UNI’s Theatre Department this year, who wisely chose to highlight the musical’s socially pervasive — and often uncomfortable — issues through its proper historical lens.

That meant that scenes featuring content that may be seen as lewd or problematic by contemporary standards (such as nudity, racial slurs and even gunfire) were presented without sanitization or censorship — resulting in a wholly authentic work that was both timely and thought provoking.

Now, that’s not to say that Osatinski didn’t take care to relate the issues of late 1960s counterculture to the modern day. On the contrary, Osatinski chose to start her production with a prelude scene in which a girl points a remote control at a projected image of contemporary news clips that progressively move back in time.

Eventually, the troubling images of war, violence and social unrest reach the Vietnam War era in which “Hair” takes place — all the while drawing striking parallels between the issues of today and the events that shaped America 50 years ago.

From there, Osatinski crafts a thoroughly entertaining, shocking and inventive musical adaptation that is aided by a terrific cast of committed actors and singers.

Simply put, the entire cast was excellent, and their passion for the music and the themes therein was apparent, with iconic songs like “Aquarius” and “Let the Sunshine In” bouncing off the walls of Strayer-Wood Theatre with a youthful verve and vivacity that all but transported the audience back into the late 1960s.

Although this production of “Hair” featured countless remarkable performances, there were a few notable standouts that deserve to be highlighted.

Among them was Erika Bailey as Sheila, a political activist and member of the “tribe” of hippies around which the musical revolves. Bailey, a senior criminology and theatre performance double major, was a vocal tour de force, bringing raw power and emotional vulnerability to each and every song in which she performed.

Michael Oasheim was also terrific as Claude, a reluctant draftee to the Vietnam War and the de facto leader of the “tribe.” Oasheim, a junior digital media production major, displayed a considerable range as both a vocalist and an actor, matching his strong singing voice with an equally impressive, albeit quirky, British accent.

Other standouts include Jakob Reha as the charismatic and drugged out Berger, Michael Alexander as the fearless black activist Hud and Zoe Sneed as the soulful and commanding Aaliyah.

All told, you could tell that the cast was having an immense amount of fun performing in this production of “Hair,” which certainly helped bring their respective characters to life — resulting in more authentic and emotionally resonant interactions on stage.

As for the stage itself, particular recognition should be paid to the wonderful set design.

Featuring a spinning center platform flanked by firemen poles and imposing scaffolding, Osatinski and crew constructed a proverbial playground on which her actors could explore and develop their characters with childlike wonder and innocence against the harrowing backdrop of the Vietnam War.

Additionally, praise should be directed towards the accompanying band, who provided the musical’s backing tracks with a lively energy and near perfect technical expertise.

If there is any criticism at all to be made with TheatreUNI’s production of “Hair,” however, it is that there were a few scattered instances of minor audio technical difficulties — namely, low microphones and overly loud bass. Still, these instances were few and far between.

In short, the UNI Theatre Department’s vision of “Hair” was a total experience — one of aural and aesthetic pleasure, as well as of biting social and political commentary.

Thanks to Osatinski’s assured direction and a cast of extremely talented and committed student performers, this adaptation of “Hair” felt just as alive and as poignant as it did 50 years ago when the youth of America decided to turn their backs on war and, instead, simply let the sunshine in.