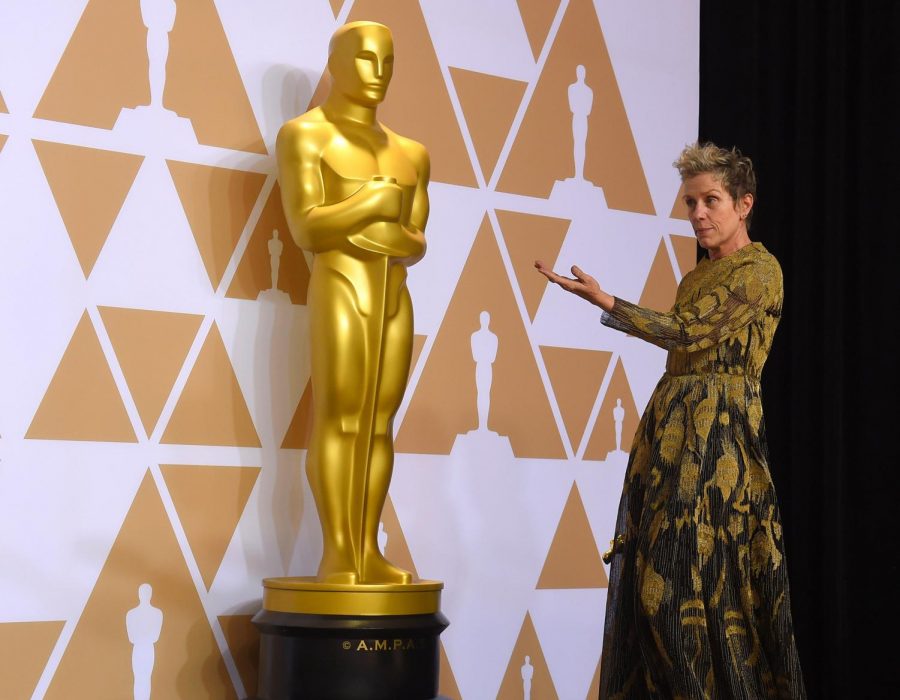 Frances McDormand won the Academy Award for Best Actress on Sunday night for her role in "Three Billboards outside Ebbing, Missouri."

This past Sunday, the 90th Academy Awards were held in the Dolby Theatre in the heart of Hollywood. Millions of people watched as creatives from the film industry were awarded with the prestigious Oscar statuette.

It takes a lot of hard work, dedication and passion to win an Oscar, and it was an amazing sight to see all the heart-felt speeches as these artists thanked their loved ones and mentors and spoke on issues they were extremely passionate about — all as they held their shiny new accolades.

There weren’t any really big surprises or disappointments for me when the names of Oscar winners were called by the presenters. The only real upset was that Jonny Greenwood’s magical score for “Phantom Thread” didn’t take home the Best Original Score Oscar. Since this is the case, let’s jump into some of my favorite moments from film’s biggest night.

Jimmy Kimmel hosted the show and gave a really tasteful and funny monologue to get things rolling. It had the right amount of humor while also touching on the important topics that have been in discussion recently.

There was even a recurring gag in many of the winners’ speeches that involved a Jet Ski because at the beginning of the show Kimmel announced, in the style of “The Price is Right,” that the person who delivers the shortest speech will win the prize.

Moments later, Viola Davis came to the stage to present the winner for Actor in a Supporting Role. It went to the clear favorite, Sam Rockwell, for his brilliant performance in “Three Billboards outside Ebbing, Missouri.”

He was also my choice to win in this category, which was also filled with other very strong performances by Willem Dafoe, Woody Harrelson, Richard Jenkins and Christopher Plummer.

Actress in a Supporting Role went to Allison Janney for her turn as Tonya Harding’s cruel and abusive mother in “I, Tonya.” Janney was also the favorite for the category and my number one choice, as well.

She beat out Mary J. Blige, Lesley Manville, Laurie Metcalf and Octavia Spencer in this category, which was one of the strongest categories this year.

Then it was time for the biggest awards of the night to be given out.

Jordan Peele, who was also nominated for Directing and Best Picture, won best Original Screenplay for his film “Get Out,” which was in one of the strongest categories of the year, with other films like “The Big Sick,” “Lady Bird,” “The Shape of Water” and “Three Billboards outside Ebbing, Missouri.” This was the category I had a tough time picking a winner, but I’m glad Jordan won for his spectacular work.

I’m also glad Roger Deakins finally won an Oscar for Cinematography for “Blade Runner 2049,” which has been long awaited.

My favorite speech of the night was Frances McDormand’s address after winning for Actress in a Leading Role for “Three Billboards outside Ebbing, Missouri,” in which she asked all of the other female nominees to stand.

There are so many other awesome moments from film’s biggest night. I, for one, can’t wait for this year’s films that will bring up conversation and open dialogue.

I hope there is true, lasting change not only in the industry, but in the rest of the world.

As it so happens, the Oscars came and went this year without much of a bang.

With host Jimmy Kimmel keeping to a safely scripted monologue, there were virtually no monumental moments during the 2018 Academy Awards beyond a few notable speeches from the winners.

Although the Oscars has often served as an outlet for politically charged diatribes, Hollywood jabs and wry banter, it was clear that those in the spotlight on Sunday night were playing it safe. With all the sensitive issues surfacing in the media regarding celebrities, it came as no surprise that the evening’s discourse steered clear of “the unmentionables.”

However satisfying and entertaining the bashing of deplorables may be — whether it be on matters relating to climate change, like Leonardo DiCaprio’s speech at the Oscars two years ago, or denouncing sexual misconduct, like speeches from every other awards show this year — the Academy was not taking any chances this time.

The PC (politically correct) addresses skirted the issues we all knew were brimming in the minds of everyone watching, which left us feeling not only unsatisfied, but cheated. The obvious avoidance of remarks about race and sex were reminiscent of a time when media was censored and the press sanitized.

Apart from the neutrality depicted by those at the microphone, most of the announcers’ bits were staged, awkward and underwhelming. The only comedy of the night came from Maya Rudolph and Tiffany Haddish, as they exchanged compliments and complaints about each other’s mutual hate for high heels and praise for the other’s latest role.

Of the few standout acts from the night, the most unusual was by far the interruption and shameful promotional gag including hot dog cannons, candy and confused moviegoers.

For the audience of an advanced screening of Disney’s “A Wrinkle in Time,” it was a magical and unforgettable night. But for those watching at home (and probably in the Dolby Theatre, too) it was unamusing and ridiculous. The interlude was surely an attempt by Disney (who, by the way, owns ABC) to promote their own franchise.

One of the few highlights of the night was not a beloved actor announcing the honorable nominees, nor a musical performance, but a shiny, lime-green Jet Ski. Promised to the Oscar recipient who delivered the shortest speech, the toy was jokingly given away as an incentive for speechmakers to “wrap it up.”

Being one of the funnier elements of the evening, the Jet Ski, presented by none other than the magnificent Helen Mirren, made a closing send-off with the winner aboard.

The culmination of anticipation to find out what film would receive the award for Best Picture of 2017 was humorously met with two familiar figures emerging from backstage. The returning appearance from last year’s slip-up announcers Warren Beatty and Faye Dunaway capped off the night with a chance at redemption.

Although widely predicted to be the winner, the announcement of Guillermo del Toro’s, “The Shape of Water” as the winner for Best Picture became a landmark victory, not only for the Mexican director, but also for Hollywood.

It was a particularly competitive year for cinema, as all of the films in major categories were defining in their own salient way. Naturally, picking a winner casts a shadow over those not chosen, but each of the nominees were deserving of the recognition they received and should be remembered for their artistry and insightful depiction of humanity.

In the end, the essence of the messages shared Sunday evening spoke of unity, appreciation and progression. Of course, we will remember the films and the stars, but the most memorable element from this year’s show was the eagerness to stand in solidarity with one another in a notoriously homogenous industry.

Lastly, let us not forget the sellout, Hans Zimmer, who was featured in a musically incongruous Walmart commercial that aired during the program.