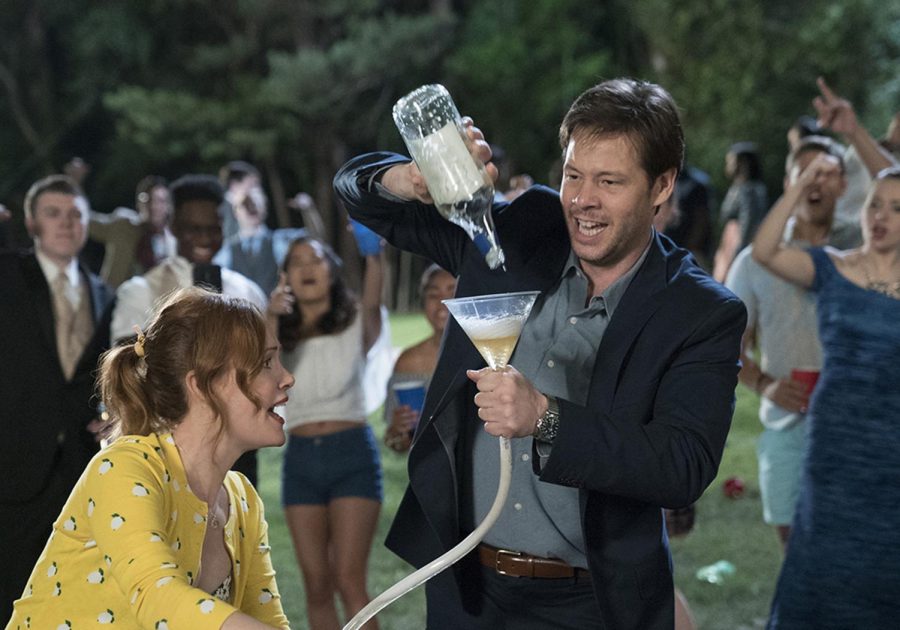 The Universal Pictures film "Blockers" stars Leslie Mann, Ike Barinholtz and John Cena. The movie will be available for wide release on April 6.

Prom is the magical night in which all teenage girls fall in love with the boy of their dreams and enter into the realm of womanhood through the transformative act of sex.

Or, at least that’s what decades of prom night narratives would have us believe.

However, in the new comedy “Blockers,” that narrative is ultimately subverted through the generic trappings of a teen sex comedy that is both predictably raunchy and surprisingly thoughtful.

“Blockers” follows three teenage girls who agree to form a sex pact, with all three planning to lose their virginity on prom night. All the while, the three girls’ respective parents learn of the pact and make it an effort to stop their daughters from having sex before the night is over.

Despite some slight storytelling shortcomings and visual flatness, “Blockers” generally rises above expectations — thanks, in large part, to a uniquely female perspective that transcends the traditionally male-oriented sex comedy genre.

“Blockers” serves as the feature film directorial debut for Kay Cannon, who had previously worked as a writer for the “Pitch Perfect” films. Although “Blockers” is similar to “Pitch Perfect” due to its feminist undertones, Cannon achieves something greater by exploring not only female sexuality, but also parent-teen relations.

Visually, Cannon lends a kinetic energy to “Blockers” — perhaps to reflect the chaotic night around which the film revolves. Opting for jump cuts and brisk editing, Cannon’s first foray into the teen sex comedy genre often unfolds with the same liveliness that characterizes the night of debauchery the film depicts.

With that being said, “Blockers” does often suffer from a handful of incongruent cuts that, while distracting, aren’t egregious enough to hamper the rest of the film’s wonderfully brisk pace.

It should be noted that while Cannon also deserves praise for attempting to feature a diverse range of shot compositions, she often relies too much on her master shots, cutting from extreme close-ups to full coverage, seemingly without proper motivation.

In general, this sometimes results in a visual flatness that unfortunately pervades even the most narratively compelling scenes of the film.

“Blockers” undoubtedly benefits the most from a smartly written screenplay that treats its characters as fully-fledged human beings.

As opposed to most male-oriented sex comedies of the past, the women in “Blockers” are allowed to be funny without being sex-obsessed “sluts” and are also thoughtful without being “moralist killjoys.”

This refreshingly nuanced characterization of the film’s young female protagonists can also be felt in the depiction of their parents, each of whom come across as incredibly sympathetic, as well as uproariously funny.

And it is in these interactions that “Blockers” really succeeds.

Just as much as the film delivers the comedic goods by way of hilarious set pieces, so too does this inspired take on the teen sex comedy transcend its genre clichés by exploring the complex relationship between a parent and their daughter.

Unfortunately, the film’s screenplay does suffer from moments of conspicuous proselytizing that would have benefited from a touch more subtlety — specifically, the film’s advocacy for female empowerment and feminine sexuality.

Make no mistake, these points of advocacy are certainly commendable and should rightfully be celebrated.

However, it would have been more effective if these points were more seamlessly interwoven into the main plot points of the film and into the characters’ motivations, rather than through a thinly veiled and awkwardly delivered soliloquy about the dangers of toxic masculinity.

Buoyed by a smartly funny screenplay, “Blockers” features several memorable performances that are both hilarious and heartfelt.

Comedic heavyweight Leslie Mann (“The 40-Year-Old Virgin,” “Knocked Up”) is particularly memorable as Lisa, Julie’s mother who experiences separation anxiety at the thought of sending her daughter off to college. Unsurprisingly, Mann hits every comedic note without fail but is at times unconvincing as the concerned single parent.

John Cena, best known for his time in WWE as the slinger of the catchphrase “You Can’t See Me,” could very much be seen in “Blockers” as Mitchell, Kayla’s beefy, dimwitted father.  As it turns out, Cena proves to be the source of most of the funniest moments in the film, thanks to his knack for over-the-top facial expressions and physical humor.

As for the teenage girls in the film, Geraldine Viswanathan is the definitive standout of the group as Kayla, who embarks on a psychedelic trip throughout the night, resulting in some sidesplitting set pieces and equally riotous one-liners.

“Blockers” is a worthy entry in the teen sex comedy canon that, most importantly, attempts to flip the genre on its head by exploring the issues of feminine sexuality and parent-teen relationships.

Despite lacking a touch of subtlety and a bit more visual richness, “Blockers” is a commendable comedy that turns a night of debauchery into an unexpectedly earnest coming-of-age odyssey.