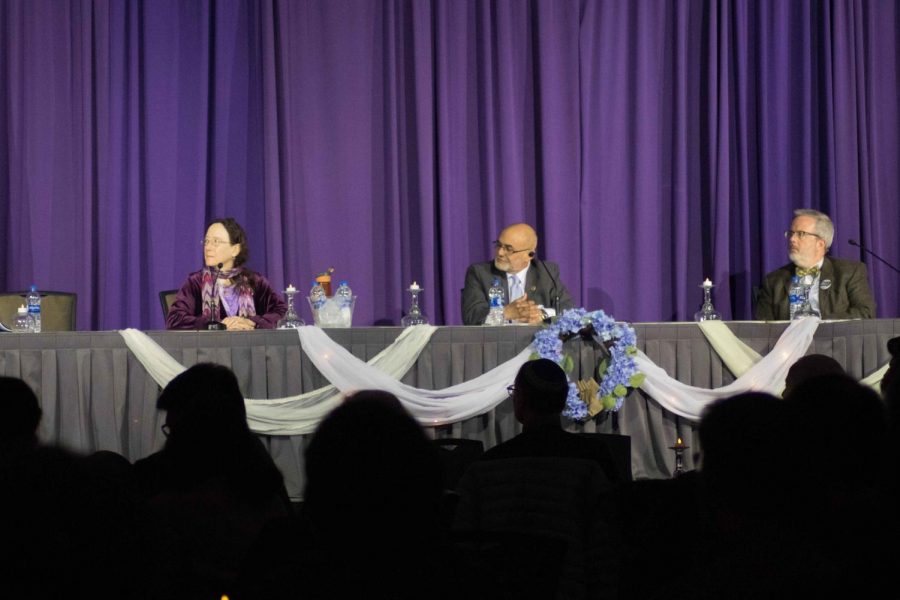 Over 250 people gathered in the Maucker Union Ballroom last Thursday, Mar. 29, to participate in an interfaith dialogue hosted by UNI’s Muslim Student Association (MSA). The event, which was dubbed “Stronger Together,” featured faith leaders from the three Abrahamic religions: Judaism, Christianity and Islam.

As guests entered the dimly lit ballroom, they were met with over 35 decorated tables, featuring customized giveaways, including MSA-branded notebooks and buttons. On the tables, attendees also found blue folders filled with informational and promotional pamphlets regarding MSA and Al-Noor, the local mosque in Waterloo.

The two-hour event, moderated by Cara Burnidge, MSA advisor and associate professor of religion, began with an introduction of the three speakers, each of whom explained how their respective faiths have impacted their lives.

Fahmy spoke on current day issues and expressed how he approaches the difficulties of life through the lens of the Islamic faith.

“We’re living in a very strange time. What inspires me is the teachings of Muhammad,” Fahmy said. “Love one another; propagate peace amongst your community and amongst yourselves.”

Likewise, Kushner discussed the profound impact he believed God can have in one’s life.

“God is in you and everywhere around you,” Kushner said. “You don’t need a mediator to meet God. The relationship between the human being and God is a direct one.”

Glenn-Burns echoed these sentiments, while also acknowledging the role faith leaders in the three Abrahamic religions play in their respective faith communities.

Burnidge also invited attendees to write down any questions they wanted answered throughout the evening.

Acting as a prompt for the direction of the conversation, the submitted questions ranged from general theology to the personal beliefs of the leaders. As the panelists went up and down the row, answering and posing questions, the similarities of the three religions surfaced.

Questions included: What does God look like to you? How do you explain God to a non-believer? How does doctrine play a role in your religion?

Josh Brelje, a junior majoring in the study of religion, commented on the interactions between the three faith leaders.

“What stood out to me was how friendly this panel was toward each other and the respect each showed towards the different religious views,” Brelje said.

“Each figure at one point mentioned [how] the best way to handle different religious views is to have a friendly conversation where you try and reach common ground rather than push your religion onto the other,” Brelje added.

MSA President Shehreen Iqtadar said the organization’s focus for the event was to spread the messages of unity and love among and between the three faiths.

By bringing together leaders of three distinct religions, MSA said they sought to inform people about the similarities shared by Christians, Jews and Muslims and to show the beauty of being different.

As the night came to a close, the Q&A style dialogue ended with messages of harmony and togetherness through the collaboration between a rabbi, a pastor and an imam.

“If we keep the idea of peace and cooperation as a theory or an idea that we aspire to, that gets challenging,” Glenn-Burns said. “But, if we put ourselves in a situation when we meet, [then] the interactions become much more meaningful. By welcoming the stranger, we might discover some unexpected blessings.”

“When great catastrophes happen, […] people jump in to help the stranger,” Kushner said. “So, we’re challenged to find these moments of creative wholeness in a broken and shattered world.”

Fahmy stressed the opportunity of participating in an interfaith dialogue.

“It’s a great, great experience to join and learn from your colleagues about your faith and the faith of other groups,” Fahmy said. “It was really wonderful, and it was a learning experience for me.”

Hameed Ullah, MSA treasurer, also noted the overarching feeling of unity at the event, saying, “The best thing about this is that Muslims, Jews and Christians can all sit at one table.”