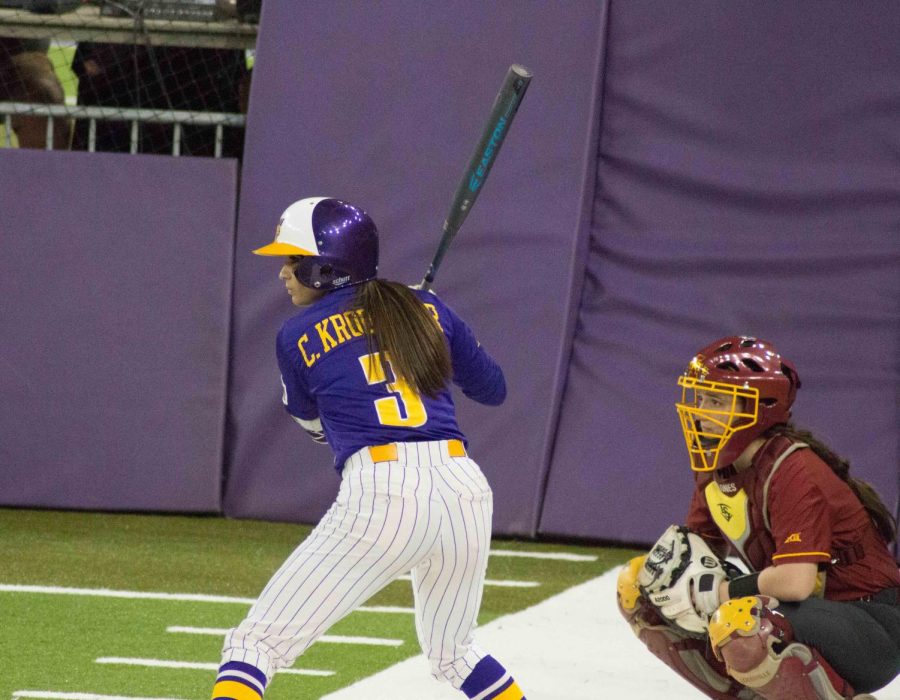 Junior Courtney Krodinger (3) steps into the batter's box against the Iowa State Cyclones last Thursday in the UNI-Dome.

After playing their first 35 games away from UNI’s campus, the Panthers’ softball team returned home to Cedar Falls to take on in-state rival Iowa State on Thursday night. Wet weather and poor field conditions at Robinson-Dresser Sports Complex had postponed the game’s original start time to 7 p.m. on Thursday from the original time of Wednesday afternoon.

Additionally, the game was moved indoors to the UNI-Dome. The Panthers and Cyclones were tied up in the all-time series 39-39-1 going into this game.

In the first two innings, UNI’s starting pitcher Brooke Craig gave up only one hit and struck out swinging. Iowa State’s Brianna Weilbacher walked two Panthers in the second as the two squads went to the third scoreless.

The Cyclones broke the doors open in the third with back to back singles, followed by two straight doubles by Sydney Stites and Taylor Nearad to put ISU up 3-0.  UNI went to the bullpen in the fourth and turned to freshman right hander Emma Olejniczak to put away the Iowa State hitters.

Iowa State outfielder Kaila Kontz went deep on Olejniczak after one out to extend the lead to 4-0 before the Panther defense ended the inning with two assisted outs to first. After going through the ISU batters in order, UNI went to work with the bats. Sammy Brunch hit a single along the third baseline that hit the third base, securing her safe call at first.

After Kennedy Bailey flew out to right field and Ashley Chesser was walked, Brittney Krodinger was hit by a pitch and took her spot on first. Iowa State then changed pitchers, going to right handed reliever Savannah Sanders. Adara Opiola was walked by Sanders allowing Bunch to score from third.

A double by Courtney Krodinger allowed Chesser and Brittney Krodinger to score and cut the lead down to one run. Claire Dudek broke down the deficit with a three run inside the park homerun to take a 6-4 lead over the Cyclones.

Iowa State’s Kontz was able to knock in three runs with a sixth inning triple, but UNI tied the game at seven when Tianna Drahn singled to send Britany Krodinger home. Going to extra innings, Iowa State catcher Kaylee Bosworth hit the ball over the fence to go up one run, as Stites doubled to add another run that secured the Cyclones’ 10-7 win.

The Panthers will return to action tomorrow as they host another in-state rival, the Drake Bulldogs, in a conference double header at 4 p.m. and 6:30 p.m.