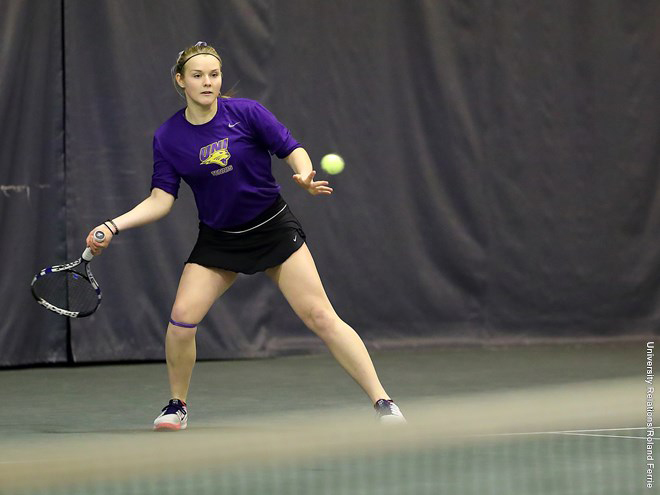 While the Panthers snapped their five meet losing streak at Valparasio, UNI has continued to struggle and has dropped their last two meets.

From April 6 to 15, the UNI women’s tennis team faced off against four opponents as their 2018 schedule winds down. The Panthers have struggled this season, having only won three of their first meets.

On April 6, the Panthers travelled to Muncie, Indiana to take on the Ball State Cardinals. Gisela Kemper and Reghan Lynch competed in a tight number one doubles match but fell by a score of 7-5.

Claudia Toledo also made the number three singles match close but also fell short 6-4, 7-5 as the Panthers were swept 7-0 by the Cardinals.

While still in the state of Indiana, UNI stopped by Valparaiso for a dual meet on April 8. Toledo claimed victory in the third singles spot by a score of 6-1, 6-2. While the number two and three doubles teams of Harri Proudfoot, Valentina Caro, Claudia Toledo and Savanna Hunt won, snapping the Panthers five meet losing streak.

The Panthers returned home on April 14, this time, playing host to the Bradley Braves. While the meet started well for UNI with Caro and Proudfoot taking victories in their respective singles matches, the Panthers struggled in other singles matches.

Proudfoot, Caro, Toledo and Hunt were able to clinch wins in their doubles matches but lost the meet by a lose 4-3 margin.

In their most recent meet on April 15 against the Illinois State Redbirds, the struggles continued as the Panthers only claimed victory in two matches as they fell 5-2.

As the season nears its end, the Panthers will hit the road this weekend for their final two matches of the regular season, taking on the Missouri State Bears on Saturday, April 21, and the Missouri-Kansas City Kangaroos on April 22.

The season will close on April 27 to 29 at the MVC Championship meet hosted by Missouri State.