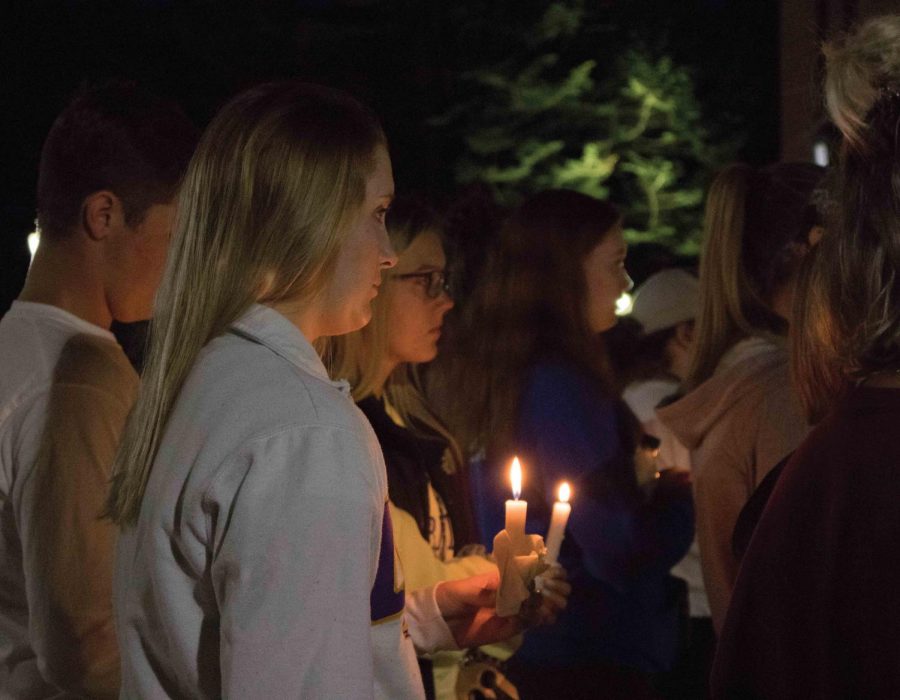 Nearly 120 students gathered at the Campanile on Wednesday, August 22 for a candlelight vigil for those who have gone missing, including Mollie Tibbetts and Jake Wilson.

Under the bright moonlight of a quiet evening, a crowd of approximately 120 UNI students gathered at the campanile Wednesday night to hold a vigil honoring the lives of Mollie Tibbetts, Jake Wilson, and all of those who have gone missing.

Organized in only a few hours via social media, the group of students held candles and united in a circle, sharing prayers, a moment of silence and their memories and thoughts of those who have gone missing.

For many students in attendance, the events of the past week have hit close to home.

“I was in high school with Mollie,” Coover added. “It really hit home.”

“Kind of like our candles, Mollie was always the light of everything,” said Mcintire. “Our candles are going to burn out. But us being here, we’re going to make sure hers doesn’t.”

Tibbetts, a 20-year-old University of Iowa student and native of Brooklyn, Iowa, disappeared on July 18 while jogging. A body was discovered just southeast of Brooklyn last week in a corn field, matching the description of what authorities had been looking for.

Jake Wilson, a 16-year-old teenager with autism from La Porte City, Iowa, had also been missing since he went for a walk near his home on April 7. According to Black Hawk County authorities, human remains found in and around the Wolf Creek area within the past week were consistent with what they had been looking for as well.

“I just hope people really heard what we had to say tonight,” said Jenna Strow, an organizer of the event. “I hope that they remember Mollie as they shared about who she was. She sounded really lovely.”

The UNI Student Health Clinic is offering grief counseling for those who need it. Appointments can be set up on their website health.uni.edu.