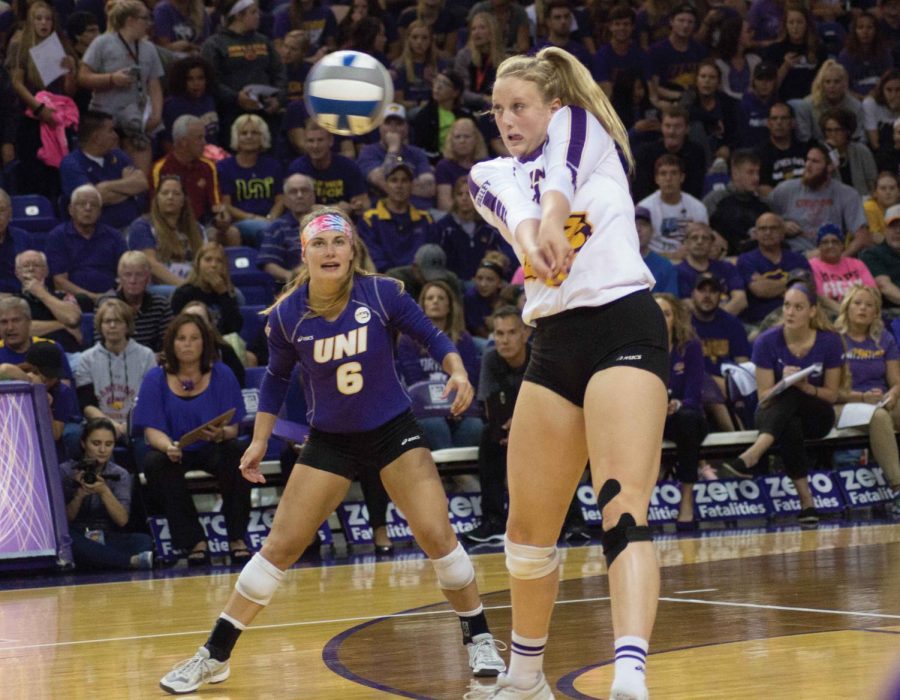 The UNI volleyball team took the court of the McLeod Center for the first time last week as they hosted a triad of matches against the Iowa State Cyclones and Washington State Cougars.

In the first home match of the season against the Cyclones (3-1), the program made history as they sold out the McLeod Center for the first time for a volleyball match since the arena opened in 2006. 6,415 fans packed the stands as the 17th ranked Panthers faced off against their in-state rivals from Ames.

The Panthers struggled on defense, particularly in block shots taken by the Cyclones, as they were out blocked nine to two.

Junior Karlie Taylor led the team with 17 kills, while Rachel Koop tallied 32 assists to go along with Kendyl Sorge’s 14 digs.

UNI welcomed Washington State to town for a double header over the weekend. In the first match on Friday, Aug. 31, the Panthers found it difficult to get past the Cougars height and strong attack and blocking ability.

Washington State came out of the gates quick with a 4-0 run before the Panthers went on a 12-8 run of their own in the middle of the first set. Unfortunately, the Cougars prevailed, taking the first set by a score of 25-23.

In the second, UNI’s sense of readiness on defense that they showed throughout the middle of the first set came out on the court. Four aces by the Panthers propelled them to a 25-19 second set win.

The third and fourth set proved to be a challenge for UNI. While the third period began with a back-and-forth flow, the Cougars used an 8-0 run late in the third to go up in the match two sets to one.

The Panthers battled hard into the late fourth, but it was too much as Washington State took the fourth set 25-19, and the match three sets to one.

Karlie Taylor led the Panthers with 14 kills, as Kendyl Sorge tallied 18 digs and 3 aces, and Rachel Koop led the team with 40 assists.

The following morning, the two squads hit the court again for their second match. Facing off against a team that they had faced less than 16 hours earlier, the Panthers brought an energy to their second meeting with the Cougars that had been absent from the night earlier.

“It was really interesting and fun last night because we had the opportunity to scout a team against ourselves,” said head coach Bobbi Petersen. “We really liked the game plan we had yesterday.”

After starting out strong in the first set, the Cougars rallied back to take the opening frame 25-23. The Panthers imitated their opponent in the second as they came back to win late in another 25-23 set. Much of the difference that led to the Panthers second set win was a stronger attack that saw them complete 62 percent of their attacks to their 56 percent in the first.

UNI nearly took the third set, but were unable to hold off a 7-1 Cougar run that saw Washington State win 25-23. The crucial fourth set went back-and-forth as both teams alternated points for much of the set. Despite the hard push to attempt to force a fifth set, the Panthers were unable  to stop the Cougars as they fell three sets to one for the second consecutive day. Notably, all four sets were decided by a score of 25-23.

“It’s a unique opportunity to play a team twice,” said Karlie Taylor after Saturday’s loss. “I think we had trouble with letting them go on runs. We did the same with Iowa State and Washington State yesterday. It’s something we’re going to have to work on in practice.”

Taylor and teammate Piper Thomas finished the match with a combined 45 kills as Koop led the Panthers in assists for the second straight match with 46.

The Panthers (2-4) travel next to Muncie, Indiana for the Ball State Tournament, where they will take on the Ball State Cardinals, Indiana Hoosiers, and North Dakota State Bison on Sept. 7-8.