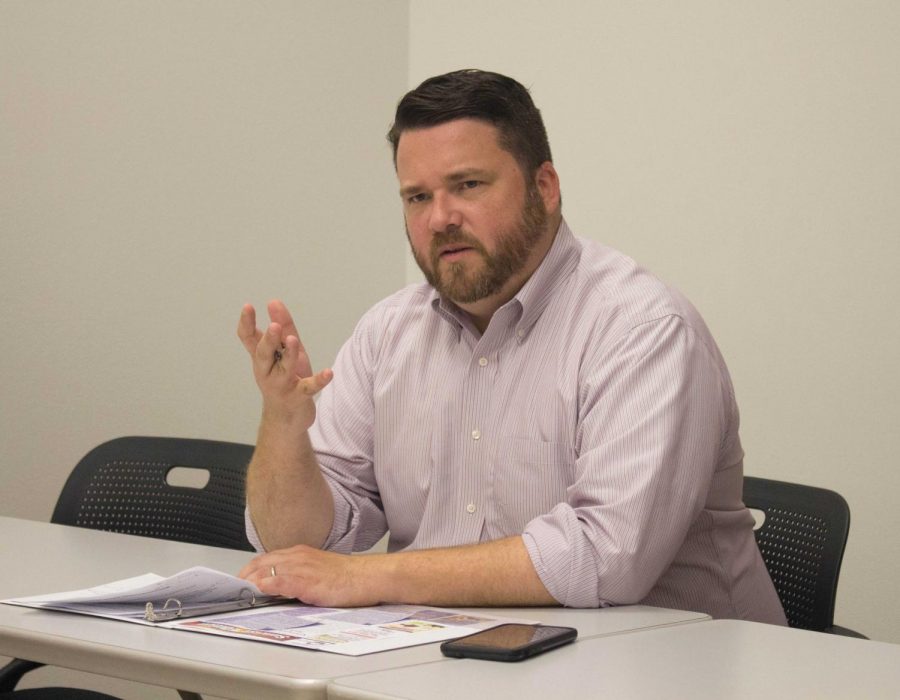 Troy Price, chair of the Iowa Democratic Party, visited campus on August 29 to lead a roundtable discussion with students about the state of Iowa universities and education.

About a half-dozen students gathered in the Purple Pen room in Maucker Union  to share their experiences and struggles with public education.

The discussion covered a range of related topics including: funding cuts, tuition increases, student debt, the price of living on campus and paying rent, working full-time as a student and the liberal arts core.

As the facilitator of the conversation, Price listened as students shared concerns and frustrations with the state of education in Iowa. He told participants that their financial struggle and academic hardships made it clear that it is time for a change in both the governor’s office and the state legislature.

Price said, “We are here to talk about Kim Reynold’s failing grade when it comes to education in the state.” He continued to reference a lack of funding due to a new education bill passed by Governor Reynolds which resulted in “Cuts for everything that people care about,” according to Price.

“You folks are paying the price for Kim Reynold’s mistakes,” said Price. “We need leaders who are once again going to stand up for all you folks.”

Jacob Madden, a senior political communications major and former communications intern with the Iowa Democratic Party, helped organize Price’s visit to UNI. Madden said the roundtable meeting was apart of a larger tour that Price is conducting around Iowa.

According to Madden, the focus of the tour is specifically to address Reynolds’ education cut record with those most directly impacted, namely, educators and students.

“The focus of this is not just college education. It is also pre-K through K-12, into college and post undergrad education. So I think it is something that they are trying to focus on getting the whole gamut of every issue that people are facing in the state,” said Madden

It is about much more than rising tuition costs, according to Madden. “There are a lot of other tangential issues, such as college preparedness” he said.

The meeting concluded with a message of optimism in the upcoming midterm election for the Democratic Party. Price said the “ridiculous policies of the GOP” must be stopped by replacing the Republican representatives with new leadership.

“We are doing everything we can for the party. This is our stand. We have got to make it happen,” Price said.