Kaepernick, Nike and the unnecessary backlash 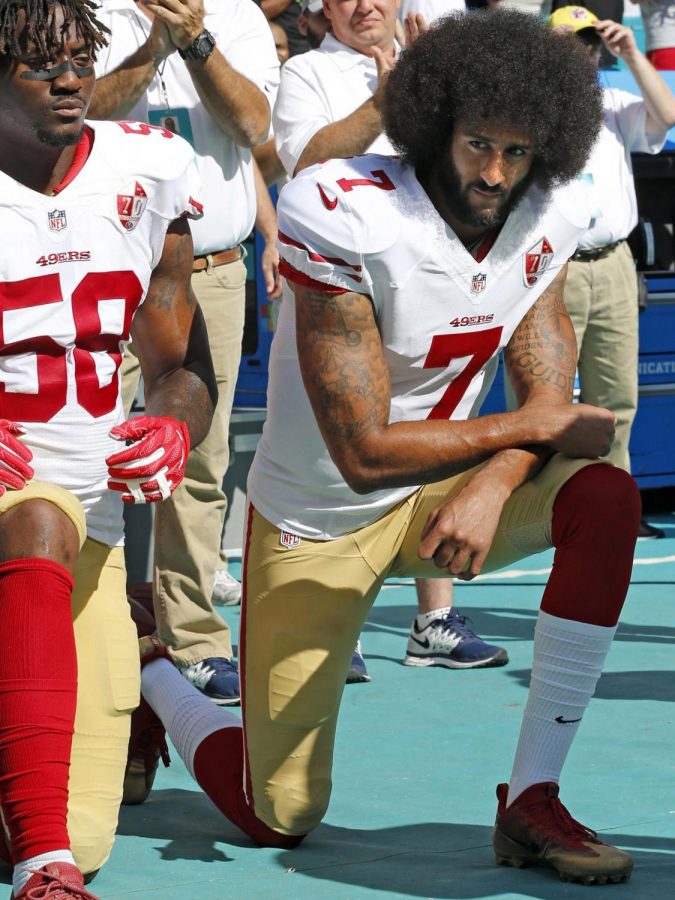 It’s been two years since NFL quarterback Colin Kaepernick took a knee during the national anthem. His decision, as he explained, was to bring notice to police brutality and racial inequality in the United States. His decision to kneel brought on a firestorm of backlash calling the action “unpatriotic and un-American,” as well as disrespectful to those who serve the military.

At first, I was skeptical of Kaepernick’s decision not to stand during the Star-Spangled Banner. I felt he was being selfish for his lack of playing time on the field with the San Francisco 49ers and was trying to simply get attention. But then I started to listen to what he had to say, and he had point. While not all law enforcement officers have been found to engage in this behavior, and the overwhelming majority of those who enforce our laws do so with unbiased judgement, there have been cases where this behavior has been not just witnessed, but documented.

A number of prominent figures have come out with their opinion of Kaepernick’s decision. In September of last year, President Donald Trump suggested NFL players who kneel during the anthem be fired by their team, saying to a crowd at a rally, “get that son of a bitch off the field right now, out, he’s fired. He’s fired!”

Others, including retired U.S. Army veteran Richard Smith came to the quarterback’s defense. “There are veterans who not only agree with Colin Kaepernick’s right to do that, but also agree with the substance of the action,” Smith said. “And [we] are willing to stand up and say Black Lives Matter and this is an important issue that we need to address in our country.”

In the last week, the next chapter in the nearly endless debate about the anthem protest was unveiled as Nike, a company known for its variety of sports footwear, clothing, equipment and much more, announced that Kaepernick would be the face of their new 30th anniversary campaign. The new poster features a picture of Kaepernick with the phrase, “believe in something, even if it means sacrificing everything.”

The phrase refers to Kapernick willing to put his beliefs out into the public, even at the risk of being criticized and losing a job as an NFL quarterback. Kaepernick hasn’t played in the NFL since opting out of his contract with San Francisco in March of 2017.

As a result of Nike’s decision to use Kaepernick, countless owners of Nike products have destroyed their merchandise in protest, even lighting the items on fire. To me, this is simply absurd. Nike decided to take a stand with Kaepernick knowing it would be unpopular, and personally, I applaud it. The entire controversy with Nike goes all the way back to the anthem protests.

Eric Reid, a former teammate of Kaepernick with the 49ers who also took a knee during the beginning of the anthem protest, wrote an op-ed in the New York Times last September describing his feelings towards the backlash. “It baffles me that our protest is still being misconstrued as disrespectful to the country, flag and military personnel,” said Reid.  “We chose it because it’s exactly the opposite. It has always been my understanding that the brave men and women who fought and died for our country did so to ensure that we could live in a fair and free society, which includes the right to speak out in protest.”

While I didn’t understand the meaning of the anthem protests before, I do now. And it’s bigger than football. While I will still personally stand for the anthem as a sign of respect for those who have fought and died to protect our country and keep us safe, I also stand with those protesting.

Men and women didn’t just fight and die to keep our nation safe and protected, but they did it also so that we as Americans can fulfill the rights that our constitution guarantees us, especially freedom of speech. When there is an issue that needs to be addressed, being quiet doesn’t often make the issue noticed or heard. But when acting in defiance and exercising free speech, the issue can be heard all across the country.

When it comes to the issue of racial inequality and police brutality, it can be difficult or even uncomfortable to talk about it. But we need to.