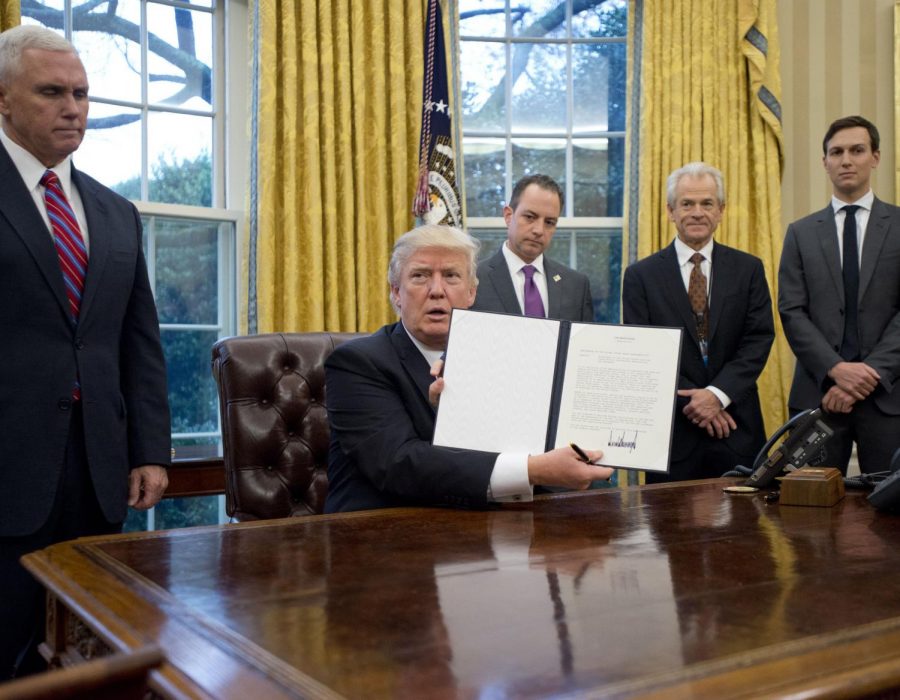 President Trump with his executive order to withdraw from the Trans Pacific Partnership on Jan. 23, 2017.

Editor’s Note: This Letter to the Editor was submitted by Steve Corbin, UNI professor emeritus of marketing.

Most Americans are life-long learners and will change their mind when facts become known.  Of course, despite what evidence is presented, there will always be stubborn, stick-to-their-guns individuals.

The conservative Wall Street Journal reported on Sept. 5 about a Chicago Council on Global Affairs non-partisan survey whereby 82 percent of Americans said they believe free trade is good for the economy; an increase of 23 percent from two years ago.

A stunning 85 percent of Americans think free trade is good for consumers.  While the Democrats sentiment over the value of free trade increased by 16 percent in the last two years, Republicans belief of free trade being good increased by a whopping 31 percent.  One hallmark of the Party of Lincoln (Republicans) has been their support of free trade, that is, until our 45th President tried to change GOP values.

Trump withdrew the USA from the 12 nation Trans-Pacific Partnership on Jan. 23, 2017.  Now, 61 percent of Americans want Trump and Congress to get back into the TPP.

What about NAFTA?  Overall support for the USA-Mexico-Canada agreement has increased by 10 percent.

Should USA and China exchange goods?  Here’s where Trump and his most ardent supporters may have to retreat from what they think of our relationship with our number one trading partner:  71 percent of Americans think a continued trade war with China will hurt their pocket book and hometown economy.

When Iowa’s 211,373 farmers learned that because of Trump’s trade tariff debacle they would receive a one penny ($0.01) per bushel of corn, $8 per pig and $1.65 per soybean bushel reimbursement as part of the $12 billion Farm Aid Plan, the entitlement they didn’t want, that may have been the straw that broke the camel’s back as to how they feel about the tariff policy.  Trump’s $12 billion bailout just became an additional tax burden for you and me.

Americans are seeing, first-hand, how President Trump’s self-imposed trade tariffs, implemented, of course, for national security purposes, and the ensuing trade wars are causing price increases in the goods they purchase.  The facts are quite compelling, and security wise, national attack sirens remain silent.

It’s reported that when Rep. Richard Neal (Dem.-Mass.) informed newly elected Trump and his White House associates how America had prospered with free trade ever since the American Revolutionary War and the United States has 154 World Trade Order bilateral agreements, 20 free trade agreements, 66 trade and investment framework agreements, 45 bilateral investment treaties and renegotiating trade agreements requires two-thirds of the Senate’s approval, he was struck by their dumbfoundedness.

I’m not shocked to learn it was no other than the late Sen. John McCain (Rep., Arizona) who was the first to warn Americans about Trump’s nationalism and isolationist policy and its potential harm to our economy.  Trump’s trade policy was the brain child of Steve Bannon (who had never worked in government or at a policy-making institute), who in turn convinced Trump that tariffs were good and would not cause any economic harm.

• Educated Americans and wise politicians alike have known since America’s War of Independence that being an isolationist does not work.

In honor to the wisest politician of modern history, Sen. John McCain (1936-2018), ask your Congressional legislators to abolish any thoughts of authoritarian-isolationist-nationalism trade policy.  Let’s keep America great like it has been since 1776 with open and free global trade opportunities for all businesses.