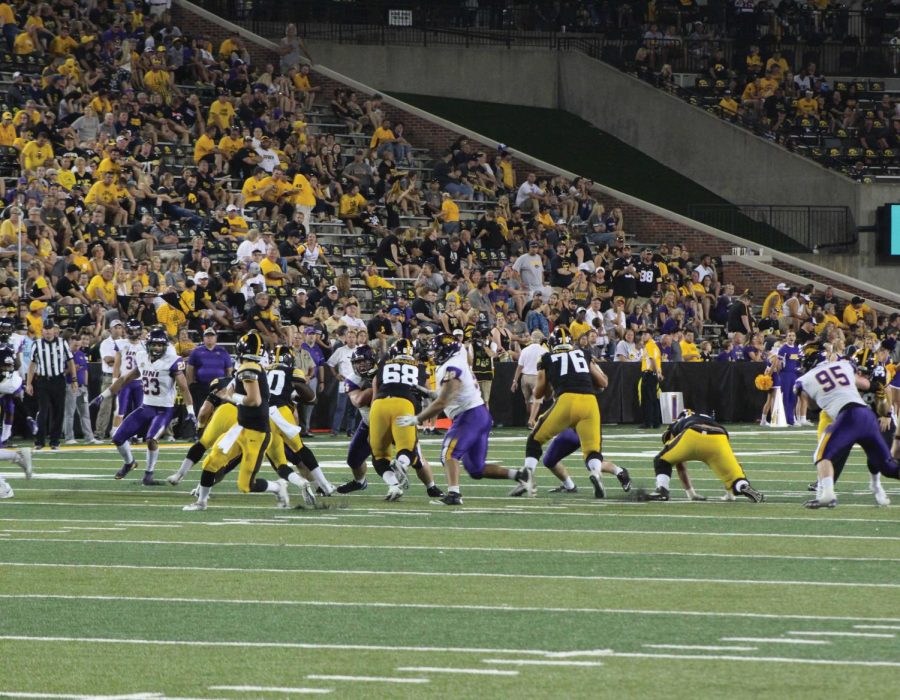 Football fans of the purple and gold drove in scores down to Iowa City in preparation for Saturday’s in-state matchup with the Iowa Hawkeyes. What they got when they arrived at Kinnick Stadium was a game that few wanted to see as the Hawkeyes (3-0) trounced the Panthers (0-2) by a final score of 38-14.

In their first meeting since 2014, the Panthers entered Saturday’s under-the-lights, primetime showdown with their in-state rivals looking to pull off an upset win in Iowa City for the first time since 1898.

UNI started out extremely slow with their first five drives resulting in four consecutive punts and an interception, one play after the Panther defense picked off the Iowa offense. The Panthers secondary defense struggled through the first half with reading outside runs and slant routes on passes.

After a rugged start by quarterback Eli Dunne in the Panthers 26-23 season opening loss at Montana two weeks ago, head coach Mark Farley turned to backup Colton Howell to lead the UNI offense. Howell struggled as his upperclassmen did two weeks ago completing only 30 percent of his passes for 22 yards and one interception.

Meanwhile the Iowa offense was out to prove their dominance by refusing to punt the ball on fourth and short on multiple occasions, converting three of their four attempts. The result of the aggressive Iowa play calling led the Hawkeyes to three first half touchdowns, two of which came courtesy of Mekhi Sargent on the ground. UNI was able to prevent more first half damage when linebacker Ricky Neal blocked a Miguel Recinos field goal at the end of the first half to keep the score 21-0 in Iowa’s favor.

The Panthers came back onto the field in the second half making a quarterback change  as Eli Dunne took over for the struggling Howell. “I’m a competitor,”said Dunne. “I knew my time wasn’t over after Montana and everyone still had my back.”

Despite the change, UNI still struggled with play on the offensive side of the ball. After a 37 yard punt by Zac Kibby, the Panthers fumbled the ball and missed a 45 yard field goal wide to the right. Meanwhile the Iowa offense continued to roll. Off the missed Panther field goal, the Hawkeyes scored a rushing touchdown by Torren Young to put Iowa up 38-0.

UNI finally cracked the scoreboard with a Dunne touchdown pass to Briley Moore at the Iowa four yard line.

“Things came out slow and then picked up in the end,” Moore said after the game. Complimenting Dunne, Moore praised his quarterback’s relaxed attitude coming into the game in the second half. “He came in with confidence. We’re fortunate to have him at quarterback.”

UNI was able to put up another touchdown on the board with a five yard pass to Elias Nissen to cut into the deficit as the final minutes ticked away. Despite the late push, UNI was unable to fire up the running game and finished with six net yards rushing, 222 passing yards and 228 total yards, compared to Iowa’s 545 total yards. They fell 38-14.

“Eli did a super job in today’s game,” said Coach Farley in his postgame press conference. “We have to go back to practice, take a look and find out where we need to make adjustments.” Farley also confirmed after the game that Eli Dunne will start at quarterback for the Panthers home opener next Saturday against the Hampton Pirates.

Looking forward to next week, Farley noted how he will prepare for the next game. “We need to find the guys who are the guts and the blood of this team and they’re going to start.”

The Panthers will face off against the Hampton Pirates this Saturday, Sept. 22 in the UNI-Dome. Kickoff is set for 4 p.m.