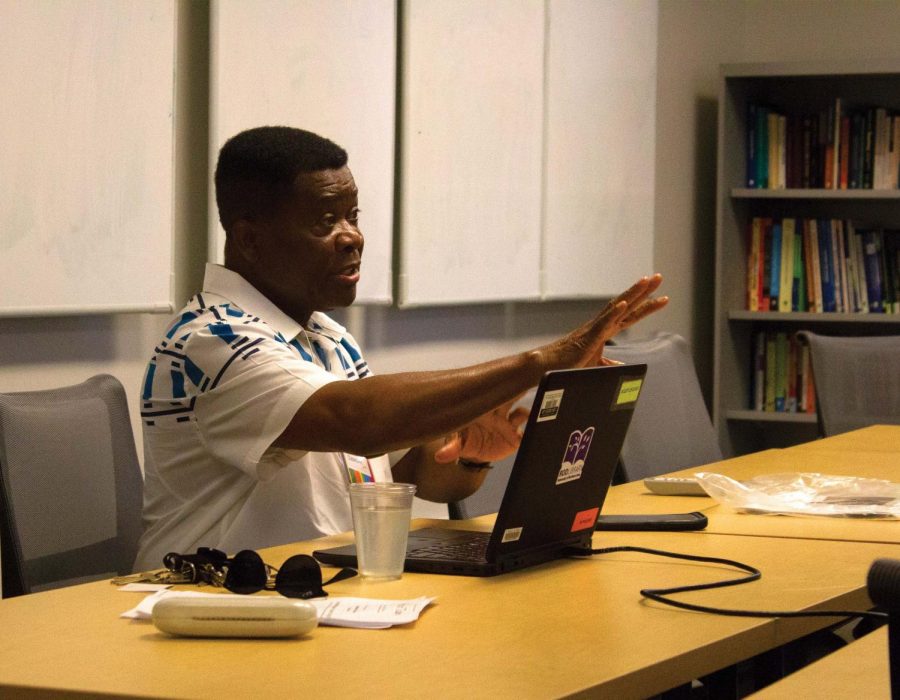 On Friday, Sept. 21, journalism professor Chris Ogbondah presented “Tolerance and Unity through African American Storytelling” in Rod Library as part of the Power of Words Festival.

Ogbondah wanted to participate in the festival because Douglass himself was a writer, orator and communicator.

Ogbondah, who is originally from Nigeria, said that the things Douglass spoke of resonated and agreed with his own beliefs. He wanted to convey these same messages while bringing in his own cultural flavor of storytelling.

According to Ogbondah, in Nigeria, storytelling is the major medium of conveying information; they even have professional storytellers.

“My interest in the things [Douglass] preached — unity, peace, living together harmoniously — they resonated with some of the African folk tales my grandpa told me growing up in Africa,” he said.

Ogbondah had the small group of people in attendance introduce themselves before he began sharing a folk tale.

In the story, the farmer invited a number of animals to his farm to help him work. Smaller animals agreed to come on one condition: that the farmer would not invite bigger animals to the farm that may endanger them. The farmer agreed, but did not follow through on his promise.

Eventually, all the animals gathered on the farm to work. When the larger animals saw the smaller ones, they began to chase after them to eat them. The scene quickly turned to chaos before the farmer finally calmed them down.

“‘Why are you all trying to eat up each other?’ the farmer asked,” Ogbondah spoke animatedly. “‘You can live in this place in peace and unity; please don’t try to devour each other […] be tolerant of each other.’”

After Ogbondah’s grandpa would share these stories, he always asked what lessons could be learned. In like manner, Ogbondah asked his audience what could be learned from the farm story.

“The object lesson our grandpa told us this story conveyed was the need for everyone to live together in peace. Do not destroy one another,” Ogbondah said.

Ogbondah shared how, growing up in Nigeria, each compound had a large tree. After all the fishermen, farmers and everyone else finished their day’s labors, almost every evening the people would gather around the tree to listen to stories.

Ogbondah’s hope for the festival was that students would be educated on the tolerance of others. In this way, he believed, the world would get to a place of peace.

Not only did Ogbondah want to see the festival provide this for current students, but he also expressed the hope that graduating students would take this knowledge with them.

“The world has become a global village,” Ogbondah said.

He wants graduating students to take these values with them as they go out into the world.

“I suggest tolerance,” Ogbondah said. “This is essentially what Frederick Douglass preached. For a person who had gone through all [that Douglass did], I could see how tolerance would be a mantra for him.”