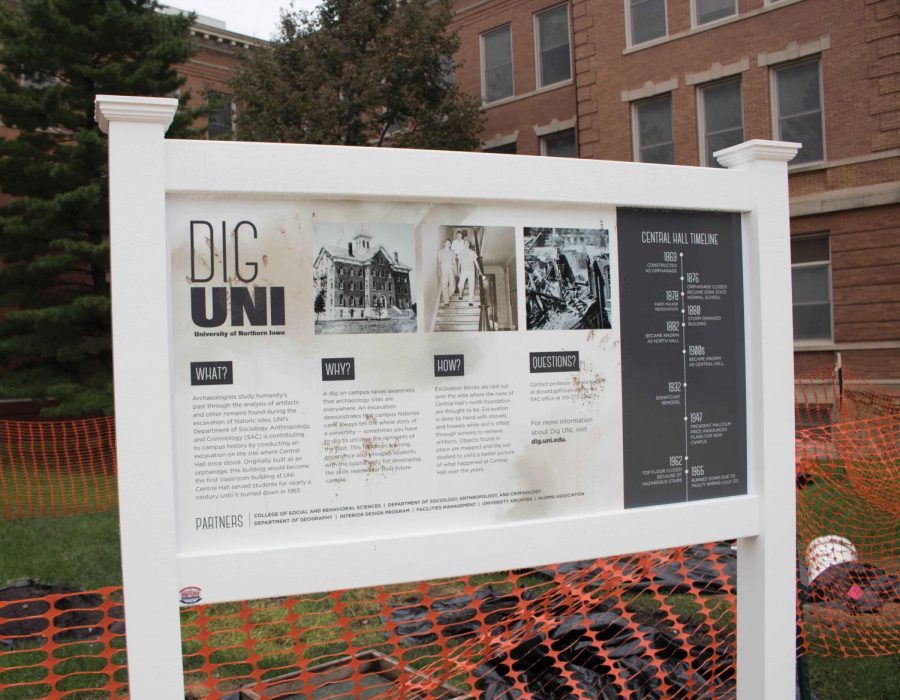 Every Tuesday and Thursday from 12:30 to 1:45 p.m., students walking by Lang Hall can witness an archaeological dig happening right on campus this semester.

The “archaeologists” are students from an archaeological field world-class, led by associate professor of anthropology Donald Gaff.

The purpose of this dig is to excavate the former location of Central Hall. Gaff said he has had the idea to excavate this area for a long time, but decided to finally lead it this year in preparation for the 150th anniversary of Central Hall’s construction. Although it burned down in 1965, Central Hall was the first building on UNI’s campus.

“[The past] helps us to understand the present,” Gaff said. “Sometimes that’s a little abstract when you’re doing stuff from thousands of years ago. But we’re talking about a building that was here in the 1960s. There are people around today who had classes in there, who had been in the building, and so it gives us through archaeology a different look because you have official campus histories and yearbooks where some of those things are memorialized. But what often gets lost is those little day-to-day things, and that’s what archaeology tells us about.”

The digging process itself entails skimming off about ten centimeters of soil at a time. The class screens each layer of the soil in search of artifacts. So far, the class’s findings have only been associated with contemporary campus life, such as pencils, pieces of brick and some small metal artifacts that have yet to be identified. Next semester, Gaff will examine any artifacts they end up finding in the lab version of the same class.

“Best-case scenario would be that we find something substantial, whether that be part of the foundation or just even things like finding bricks — or maybe we’re 30 centimeters down, and we find a pencil which would have been from a long time ago,” said Trenton Delp, a senior majoring in anthropology and speech-language pathology and one of the students participating in the dig. “But finding something that has some substance that would allow us to paint a picture or paint a story of what might have happened.”

Gaff believes the dig is helping his students learn what archeology is like in real life, as opposed to the unrealistic depictions of the field on television.

Delp appreciates that the class is giving him real experience working in archaeology.

“Getting messy in the dirt is always a fun experience,” Delp said. “But I think another thing that I enjoy is just that I am learning. It’s not just me, like, when I was a kid going out and digging a hole. We’re digging for a purpose. So I’m learning real scientific things about how to dig properly [. . .] I like the application of it.”

Delp has also enjoyed how the dig has helped bring attention to the anthropology major. Since the dig is happening on campus, it often sparks conversations with passersby.

“We’re learning about things that are still yet to come,” Delp said. “We’re painting a picture of the past. We’re getting an understanding of what happened before us to help understand what’s happening now or what’s gonna happen in the future — or possibly happen in the future. Anthropology, to me, gives better understanding to things just like any science or history would. It helps you know about the past, the present and the future.”

The dig comes with challenges. The biggest one? The weather.

“So with this constant non-stop rain, the first thing we have to do is literally bail out the excavation units, take buckets and dump out all the water and the soil is just muddy,” Gaff said. “When it’s drier, it goes through the screen a lot easier. When it’s wet, it just balls up into clay balls, and each of those has got to be pushed through. Weather has definitely been a challenge.”

Gaff says his class will keep digging until it gets too cold for them to continue.