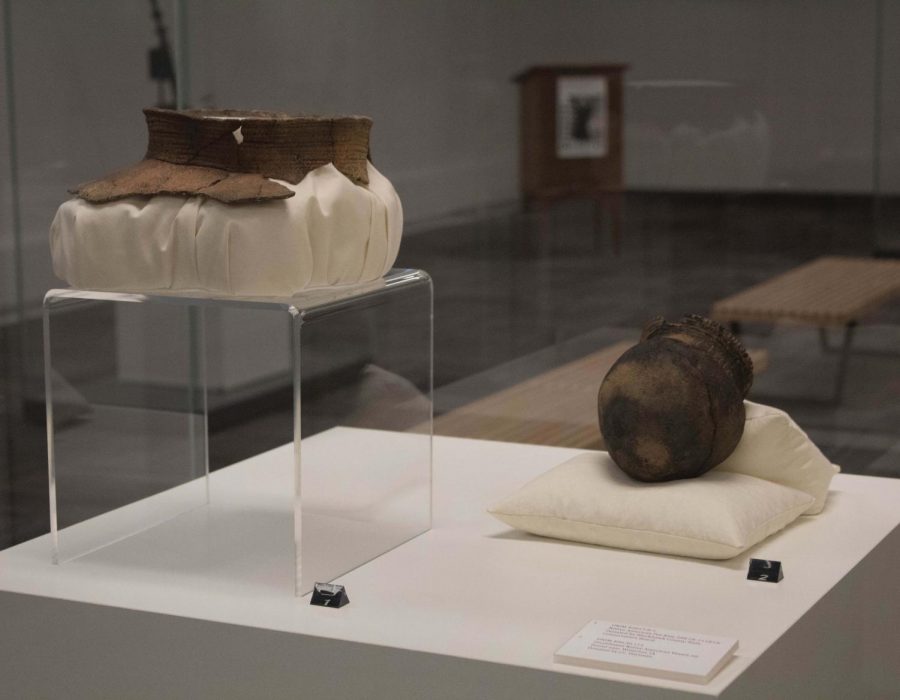 The lastest UNI Museum exhibit came together in the last year and a half, but the idea behind it has been in the works for much longer.

The exhibit is made up of ceramic works from both the UNI Museum and the UNI Gallery of Art.

Pieces featured in the exhibit range from 4,000 years ago to 2018. Some works are from contemporary artists, and others date pre-Columbian to Mesopotamia. The pieces are also geographically diverse, according to Jessica Cruz, the exhibit preparator and outreach coordinator of the UNI Museum.

Arndt thought about doing a joint exhibit when he started at UNI four years ago and visited the UNI Gallery of Art.

“It sparked with me being new here that we had the wonderful ceramics collection in the museum,” said Arndt. “‘Why aren’t our two departments working together and looking at objects?’”

Timing for exhibits never seemed to line up, but when it did, Arndt reached out to Darrell Taylor, director of the UNI Gallery of Art, to ask if he’d be interested in working on the project together.

The two co-curated the exhibit with ceramic pieces showcasing both style and cultural functionalities.

“One of the really unique things about pottery is that it has been something that has been a part of human experience almost since the very beginning,” said Cruz.

One of Taylor’s favorite pieces from the exhibit is by Virginia Scotchie. It is a bottomless bowl that can’t be used for the intended purpose.

Cruz said that even early ceramics that were mainly practical had embellishments added to them.

On opening night of  the exhibit, there were around 50 people in attendance. Art professor Joann Schnabel spoke, as well as Arndt and Taylor.

The original goal of the exhibit was collaboration, according to Arndt, but now he sees it as something more.

“It started to dawn on me that a lot of people were creating separation between art and ethnographic, which to me was a crying shame because the stuff that’s made across the world is just as beautiful as anything being made in an art studio,” Arndt said.

One of Cruz’s favorite pieces is a red Owens ceramics art piece juxtaposed next to an ancient Chinese piece done in a similar style. The Owens piece is done by a Sea Grove Potter.

According to Taylor, the Sea Grove Potter community from North Carolina is inspired by Asian design.

The UNI Gallery of Art has Sea Grove Pottery pieces thanks to donations from UNI alum Lawrence Auld.

Taylor said the Gallery of   Art’s relationship with its donors is essential since they have little to no budget to purchase pieces on their own.

Other pieces in the exhibit also have UNI connections, including some by former UNI art professor Dean Schwartz.

There are also historical pieces discovered in the Cedar Falls-Waterloo area. One bowl in particular was shattered by a lone hunter and left where it was, according to Arndt. Once rediscovered, the pieces were put back together to tell the story of that particular pottery. Only the neckline of the pottery piece is on display at the exhibit.

“The goal of it is kind of to make people think differently, going home and looking at the idea that this ceramic piece means something different to me than it does to someone else, but it’s still important,” Arndt said. “So it’s kind of respecting cultural objects.”

Arndt hopes students come and ask questions about the pieces because the small plaques can only contain so many details. One way students have been interacting with the exhibit is through visits set up by professors during class time.

“I want students and anyone else who might be viewing that exhibition to realize that we have incredible objects, art objects and historical objects on campus,” Taylor said. “They are a resource for researchers and for scholars and for students to study. In a sense, combining our collections in this way is an opportunity for students to realize that these two collections exist.”

Arndt echoed the sentiment that a cross-departmental exhibit is a unique opportunity, especially for students who play a role in putting the displays together.

“A big goal for us is to make people look at objects around them in a different light, make them respect them, make them actually see value in them,” Arndt said. “And I think this has done that.”