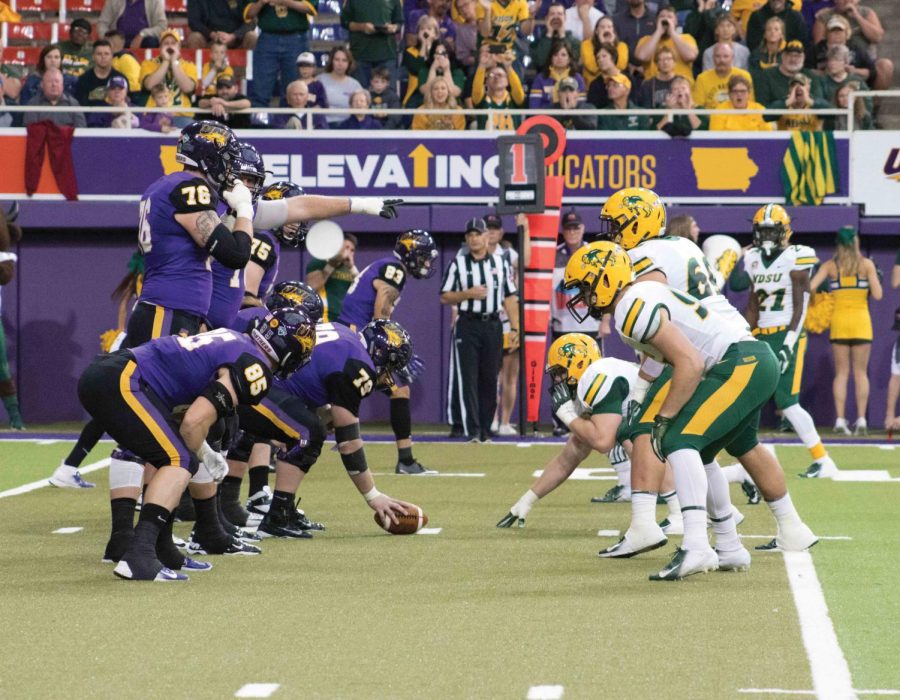 The UNI offense was able to quickly jump onto the scoreboard in the first quarter 14-0, but the North Dakota State running game was too strong down the stretch as the reigning national champions cruised in the fourth quarter to a 25 point win Saturday in the UNI Dome.

What started as an optimistic first half for the UNI Panthers football team ended with a crushing performance in the second half by the North Dakota State Bison.

The Panthers were nearly shut down in the final 30 minutes of play, scoring only seven points in the second half in their 56-31 loss on Saturday at the UNI-Dome.

In a recently competitive rivalry, the Panthers and Bison took the field both with 1-0 records in Missouri Valley Football Conference (MVFC) play looking to pick up a big win against a challenging conference opponent.

The Bison, ranked number one in the nation for much of the past half-decade with six national championships in the last seven seasons, looked to continue their dominate play.

UNI looked to capitalize on momentum coming off back- to-back shutout wins over Hampton and Indiana State in the past two weeks, combining for a total score of 77-0.

UNI got out to a fast start on offense as quarterback Eli Dunne found Briley Moore for a 69 yard catch and run for a touchdown on the third play of the game to take the early 7-0 lead.

After forcing a Bison punt on their first possession of the game, running back Marcus Weymiller broke free for an eight-yard touchdown run to

The Bison would manage to find the endzone shortly before the end of the quarter as quarterback Easton Stick connected with Darrius Shepherd for a 20-yard touchdown pass. At the end of one quarter, UNI led 14-7.

Momentum began to swing in the Bison’s favor when Dunne threw an interception near midfield, which set up a three-yard touchdown pass from Stick to running back and Waterloo native Lance Dunn to tie the game at 14.

UNI responded the next drive as wide receiver Jaylin James caught a 19-yard pass from Dunne with two defenders on him to give the Panthers the lead once again.

With a devastatingly strong running game between Dunn and Bruce Anderson, the Bison tied the game quickly with an eight-yard run after a pitch throw from Stick. The Panthers were able to tack on a32-yard field goal by Austin Errthum to end the half and give UNI the 24-21 halftime lead.

Coming into the third quarter, the Bison came out strong.

“They had us on our heels in the first half,”said Bison head coach Chris Klieman. “This is a tough place to play.”

Klieman, a former member of UNI’s defensive team in his college career knew the Panthers system well, emphasizing to his team to take on adversity.

The Bison grabbed their first lead of the game with a 22-yard touchdown pass from Stick to Sheppard, his second score of the game to take a 28-24 lead. UNI struggled much throughout the second half in stopping the running juggernaut of Dunn and Anderson as the Bison ate away at the game clock.

finding Deion McShane for a 24-yard touchdown pass to put the purple and gold back on top 31-28 heading into the final period of play.

In immediate response to the Panthers retaking the lead, NDSU struck back on the first play of the fourth quarter with a one play, 75- yard catch and run touchdown play from Stick to Anderson to go up 35-31. From there on, the Bison never looked back as they continued to pound the running game onto the UNI defense.

“Our defense didn’t do good enough,” said head coach Mark Farley. “To score 31 points and not win is disheartening.”

Stick, who finished the game completing nine of 15 passes for 179 yards and four passing touchdowns, broke into the end zone with a one- yard run on the Bison’s next possession to take an11-point lead, 42-31. NDSU would add one final exclamation point to their dominating second half with a 25-yard touchdown run by Adam Cofield to ice the game and hand the Panthers the 25-point loss.

“It was a heck of a football game,” Farley said after the loss.“We played our tails off.”

UNI (2-3) will be on the road next weekend as they travel to Vermillion, South Dakota to take on the South Dakota Coyotes (3-2) at the DakotaDome. Kickoff is set for6p.m.

The Panthers will return to Cedar Falls on Oct. 20 for their homecoming game against the South Dakota StateJackrabbits.