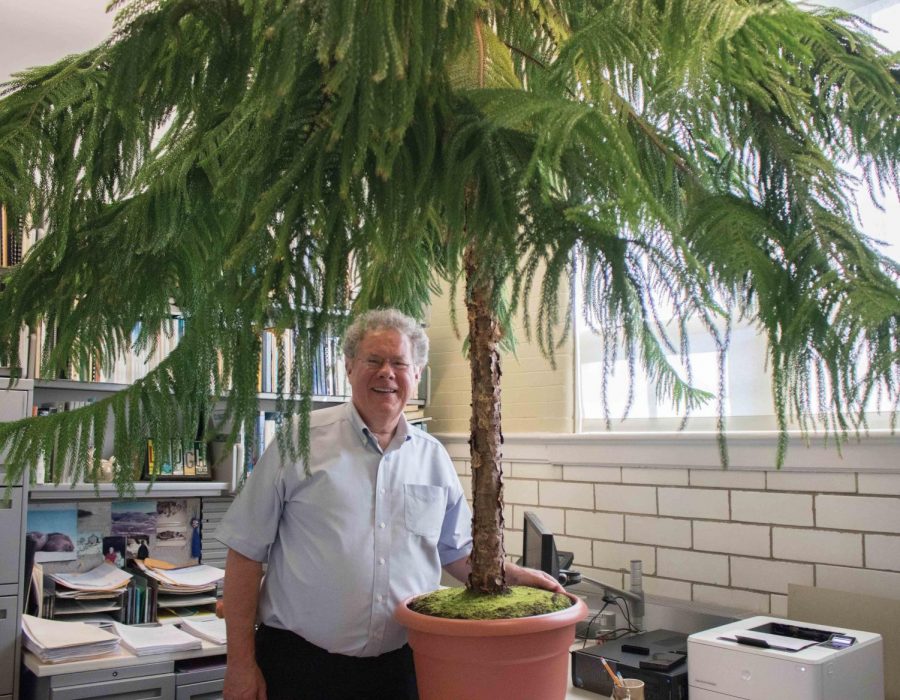 Professor Dave May poses with his eight-foot Norfolk Island Pine tree in his office.

David May has put down roots here at UNI — quite literally.

A professor in the department of geography, May works in his office canopied by an eight-foot Norfolk Island Pine tree that grows on his desk.

The branches graze both walls in his office in the Innovative Teaching and Technology Center. He continually has to trim the top, which reaches the ceiling.

May’s late wife loved trees, and they had a house full of plants. The tree in May’s office was given to his son when he was born. May had another tree that his wife gave him before they were married, but it became too root-bound in a small pot and eventually died. Because his son has since moved away, May gave the pine a home in his office.

He said it can be hard to find someone to water it when he’s out of town. He once tried an automatic watering machine that pumped water from a bottler through tubes at intervals, but it didn’t work. Now, he relies on his co-workers.

“My colleagues are kind of protective of it also,” said May. “They like it; they know it’s part of the office.”

While repotting the tree last summer, he dropped it on his leg, badly bruising it to the point where he needed a cane.

“I went limping to class the first day,” May laughed.

May isn’t the only professor with a plant in his office. Michael Fleming, associate professor of family studies, has a vine growing on his ceiling in his office in Latham Hall.

A few years ago, while Fleming was attempting to transplant the vine, the contents of the pot spilled everywhere.

“I had dirt all over everything,” Fleming recalled. “It’s like it was fighting me. I just put it back there and added more dirt.”

Fleming enjoys having plants both in his office and at home.

“That’s kind of my mental health thing at home,” Fleming said, referring to his plants and garden.

In his office, a philodendron vine that he has had for ten years sits in a pot on top of his bookshelf near the ceiling. As it grew, it cascaded down the bookshelf. To keep it out of the way he has started pinning it to the ceiling. Today, the vine spreads across his entire ceiling.

“I’ve joked at times that at some point, [people will say,] ‘Where’s Fleming?’ and I’ll be in the office, the vines wrapped around me like [something from] the Rocky Horror Picture Show,” Fleming laughed.

“Each person does their office their own way,” Fleming said. “It makes the office a little homey.”