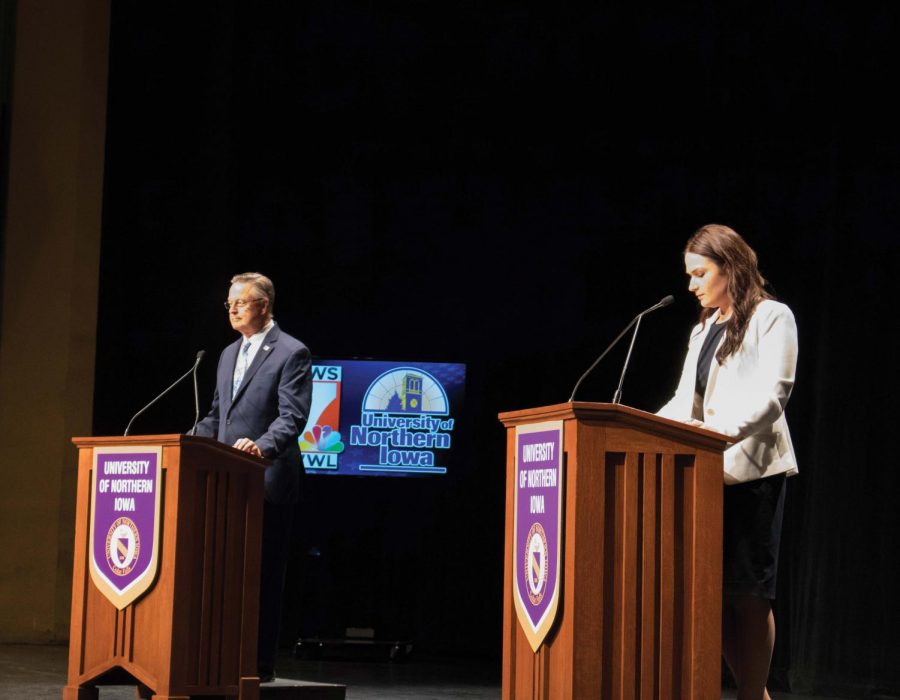 If the stormy weather outside Gallagher Bluedorn Performing Arts Center (GBPAC) was to be an indication of the events unfolding inside, it did not disappoint.

At 7 p.m. on Friday, Oct. 5 in GBPAC, Representatives Abby Finkenauer and Rod Blum took part in the first debate for Iowa’s first congressional district in the United States House of Representatives.

Finkenauer, 29, currently represents her hometown of Dubuque in the Iowa Legislature. She recently received her law degree from Drake University and is widely considered to be a progressive Democrat.

Blum, 63, has served the in the House since 2014. He is a member of the House Tea Party and Freedom Caucuses. Also a native of Dubuque, Blum attended Loras College and owns several businesses.

The opening statements from the two candidates came to define each of their approaches to the debate.

“I’m running for Congress because this is personal,” Finkenauer proclaimed confidently. “At the end of the day I grew up in a state where we were promised if you work hard, you can make it.”

“The reasons I ran, two reasons: first of all, love of country, and I also ran because of the American dream,” Blum proclaimed.

There were points of agreement for the pair of candidates, specifically on immigration policy.

Finkenauer’s Republican challenger did not disagree.

“My heart goes out to people who are trying to immigrate to this country,” Blum remarked. “That being said, I’m kind of old fashioned… I am one-thousand percent for legal immigration, but you have to do it the right way.”

The pair also agreed that the nation’s healthcare system is broken, but their proposals were radically different.

“We need to add a public option to the Affordable Care Act and fix it,” Finkenauer argued. “Allow Medicare to negotiate directly with drug companies to lower insurance premiums.”

“The miracle of the free market will drive prices down,” Blum said. “Unleash the private sector to do their thing… we overregulate it to death today.”

Questions of ethics and tax cuts produced the most heated exchanges of the debate. Blum was quick to debate the idea that tax cuts hurt government revenues.

“This is a myth that cutting taxes is costing the government anything,” Blum argued.  “If you want to grow government, cut taxes.”

Blum argued his case for tax cuts using two historical examples. After both the Reagan (‘86) and Kennedy (‘64) tax cuts, Blum explained, government revenues greatly increased because “we have more taxpayers and more people were making money.”

What this account did not mention, though, is both the considerable increase in government spending and higher tax rates after the initial cuts in both 1964 and 1986.

Finkenauer sharply criticized Blum’s vote in favor of the tax bill because of the burdens it places on social programs like Medicaid and Social Security.

Although Finkenauer was consistently critical of Blum’s rhetoric and voting record, she failed to put forward specific policy proposals on taxes, immigration, or gun control.

Sashay Carroll, a junior at UNI, was excited about Finkenaur’s grassroots focus.

“We need to care more about what the people have to say, because the people who have the money make the decisions, and that’s not right,” Carroll remarked.

“When Blum tried to deflect to the resistance, Finkenauer would say ‘no, I don’t care about all that, I care about the policy,’” Westhoff noted.

But not all students were convinced Finkenauer’s performance was worthy of a victory lap.

“I thought it was awesome how [Blum] spoke almost entirely in concrete examples with what he’s done,” Patnode explained. “I thought maybe [Finkenauer] would point to what she’s done in the Iowa legislature because she’s already been in office for four years.”

Recent polling shows Fineknauer has a substantial lead over Blum. As of press-time, political data site FiveThirtyEight projected that Finkenauer has over an 85 percent change of defeating Blum in November.  The next debate between the two candidates will be Oct.16 in Cedar Rapids.