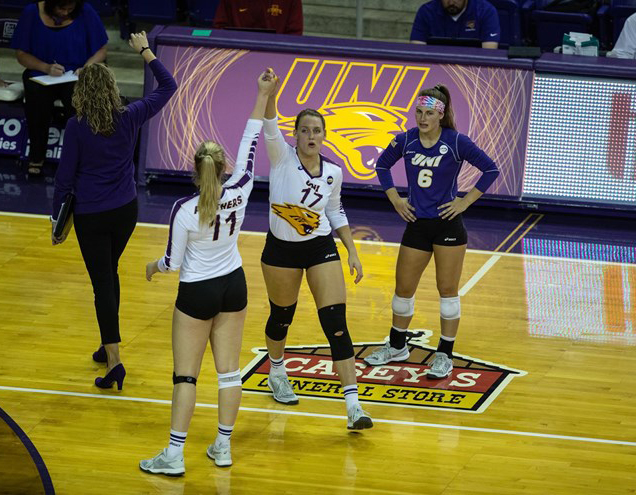 With eight conference matches to go in the season, the Panthers (16-6 overall) lead the Missouri Valley Conference (MVC) with a 10-0 record in MVC play.

Over the past week, the UNI volleyball team has continued to display their dominance in Missouri Valley Conference (MVC) play with three matches against the Southern Illinois Salukis, Missouri State Bears and the Drake Bulldogs.

Sophomore Karlie Taylor led the purple and gold with 25 kills, while Piper Thomas and Jaydlin Seehase both posted double-digits in the kill category. Setter Rachel Koop also matched her season high for a single match with 53 assists.

Following their win at Southern Illinois, the Panthers traveled over to Springfield, MO to take on the Missouri State Bears. Considered to be a conference volleyball power, the Bears didn’t make it easy for UNI, pushing the match to five full sets. UNI struggled in the second set only recording a team attack percentage of .194 and committed seven errors.

Despite the struggles, the Panthers rallied to win the first, third and most importantly, the fifth and final set to take the match 25-11, 22-25, 25-22, 23-25 and 17-15. Thomas lead the way with 22 kills and a team high .463 attack percentage. Koop tallied an additional 60 assists in the win, continuing her strong play from the night earlier.

To wrap up homecoming week, the Panthers welcomed in-state rival Drake to the McLeod Center on Friday night. Once again, UNI was put to the test against another challenging MVC opponent.

The Panthers rose to the challenge and defeated the upset minded Bulldogs in another five-set thriller, winning 25-19, 23-25, 25-15, 22-25 and 15-5. This was UNI’s 44th consecutive match victory over Drake dating back to November 1996. Additionally, head coach Bobbi Petersen improved her all-time record against the Bulldogs to 37-0.

Taylor finished with 25 kills and 11 digs for her 14th double-double of the 2018 season. Libero Kendyl Sorge led the team with 31 digs and four assists, while Koop recorded 60 assists for the second straight match along with 12 digs.

As of press time, the Panthers are set to take a brief break from MVC play and host the 18th-ranked Marquette Golden Eagles. UNI will resume MVC play on Friday, Oct. 26 when they host the Valparaiso Crusaders at 7 p.m.