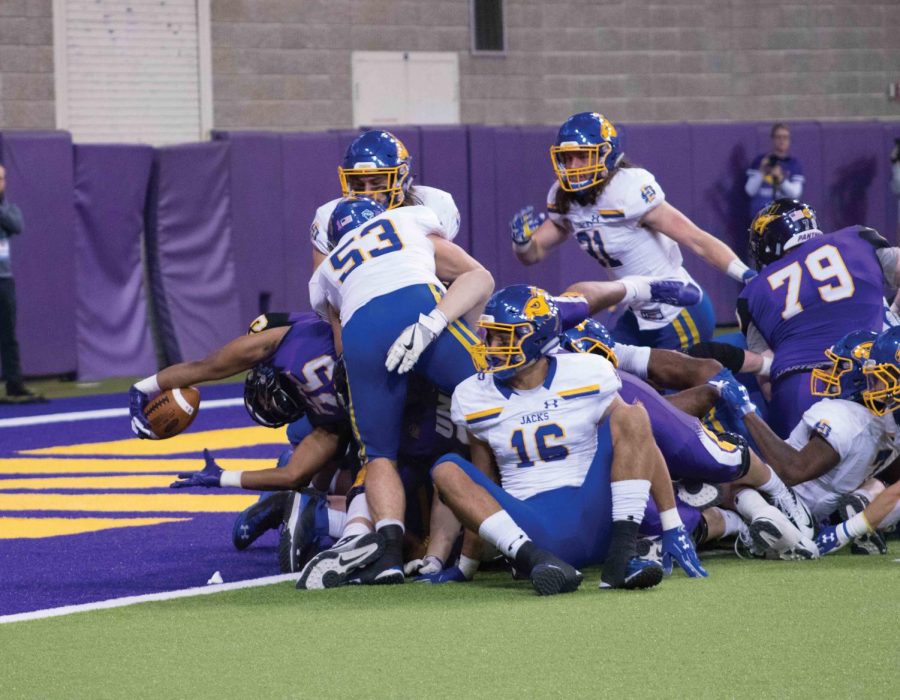 Bend, but don’t break. That was the story for the Panthers on Saturday in a crucial game against South Dakota State University (SDSU) in the packed UNI-Dome.

Going into the weekend, UNI knew that they would be facing quite a challenge against the second-ranked Jackrabbit offense, led by quarterback Taryn Christion.

“I think he’s one of the better quarterbacks in college football,” said head coach Mark Farley. “We knew we had to step up our game.”

“Their quarterback is their go-to guy,” added Duncan Ferch, one of UNI’s captains and anchor for the defense. “Holding them to nine points was huge.”

SDSU was averaging 48.4 points per game prior to the start of their match up with the Panthers. This was also the first time since 2013 against North Dakota State that the SDSU has been held out of the end zone for an entire game, having only entered the red zone once in the entirety of the contest. The Jackrabbits settled for only three field goals by kicker Chase Vinatieri.

Christion himself had a few nice things to say about the Panthers. “They’re a physical team,” he said. “They really took it to us.”

On the offensive side of the ball, featured running back Marcus Weymiller still feels there’s room for improvement.

“We could have done better, but, when you get in those games…You’ll take the win any way you can get it.”

The senior leader and captain carried a large load for the offense on Saturday with 20 carries for 110 yards.

The other featured running back in the Panther offense, Trevor Allen, had 10 carries for 43 yards and a goal-line touchdown.

Quarterback Eli Dunne’s passing efficiency also aided in the win, throwing for 172 yards on 13 completions and a touchdown to wide receiver Jalen Rima.

While Weymiller wasn’t necessarily impressed with the offensive side of the ball for UNI, Coach Farley had plenty of praise to hand out to his team.

“This is the best performance of the season so far,” said Farley. “They really have grown off these last few games. They’re locked in.”

Two interceptions were also key for the Panthers defense in the victory. The first came to Korby Sander in the opening minutes of the third quarter.

“Coach Farley told me right before that series to hang on number 15 (wide receiver Cade Johnson) a little more,” said Sander. “That’s exactly what I did, and he threw the ball right to me.”

Christion had thrown only one interception all season before entering this game.

The next interception came in the most critical moment of the game. With 23 seconds remaining and the Jackrabbits still within one score, Xavior Williams came in clutch with an acrobatic one-handed pick, returning the interception 30 yards for a defensive touchdown, giving the Panthers the 24-9 victory.

Rather than just letting the offense take over, Williams took it to the house for a pick-six to close out the victory.

“I saw X (Williams) just stick his arm out and it kind of just stuck there,” said Ferch on the play that sealed the victory. “He hauls it in and I’m trying to tell him just to go down, but once you see the end zone, you want to get in there. So, I don’t blame him for that.”

Next week the Panthers travel to Macomb, IL to face off with the Leathernecks of Western Illinois. WIU is 3-4 overall and 2-2 in MVFC play, coming off a 31-14 victory at Missouri State.