UNI continues to roll through the Valley 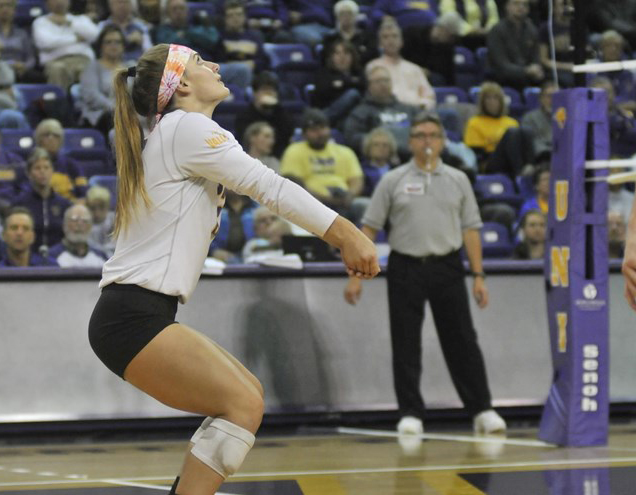 With six matches to go in conference play, the Panthers still sit undefeated at 12-0 in Missouri Valley Conference action as the regular season nears its end.

The UNI Panthers volleyball team put their undefeated record in Missouri Valley Conference (MVC) play to the test on Saturday, Oct. 27 as they hosted the Loyola-Chicago Ramblers at the McLeod Center.

After taking down the Valparaiso Crusaders a night earlier in a five-set thriller, the Panthers looked to continue their hot streak in the MVC and attempt to move to 12-0 in the conference.

Loyola got out to a quick start, scoring the first few points of the opening set before the UNI attack took effect. After tying the set at eight points apiece, the Panthers ran away with a strong attack and an 82 percent accuracy.

In the second, the Ramblers once again jumped in front quickly. Loyola’s Delilah Wolf helped set up the visiting attack with 17 assists as Morgan Gresham notched five kills. But in the middle of the set, the Panthers defense stiffened as UNI began to climb back into the match to tie the set at 19. The two conference opponents swapped points back-and-forth, but it was the Panthers who prevailed in the second set, 28-26.

The Panthers picked up where they left off in the third set as they quickly ran up the score to 7-3 in their favor. From there, the purple and gold never looked back as they blazed across the finish line to take the set 25-17 and finish off the Ramblers in a clean sweep.

“We grew a ton this weekend,” said UNI head coach Bobbi Petersen. “It really forced some people to get out of their comfort zones.”

Coach Petersen also commented on Taylor’s injury earlier in the week from practice, describing it as a “non-season ending injury.”

“We’re hoping to get her back as soon as possible,” Petersen said. “I have trust in our athletic training staff.”

The Panthers (18-7) will hit the road this weekend for a doubleheader against the Bradley Braves and Illinois State Redbirds on Nov. 2-3. UNI will return home for their final homestand of the year on Nov. 9 as they host the Missouri State Bears.